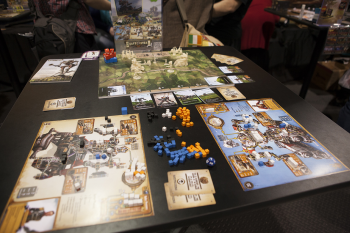 Two Victorian-era gentlemen meet on the field of battle to settle a dispute between their countries, choosing the obvious armament of the day: Four-stories-tall steam-powered Titans, crewed by thirty men and carrying weapons designed to reduce buildings to ruin. This is the premise of Heavy Steam, a tabletop miniatures tactics and battle game by Jeff Gracia of Greenbrier Games currently funding on Kickstarter. After some time with the game’s rules and an in-depth rundown of a prototype, I can confidently say that the combination of a quirky, fun world and unique game mechanics makes Heavy Steam one of the more interesting miniatures board games I’ve seen in a while. See, Heavy Steam isn’t just a miniatures and tactics game – it’s also a hardcore resource management game. “I really wanted to capture how the inner workings of a large, military vessel affect the effectiveness and combat capability of that vessel,” said Jeff Gracia in an interview with The Escapist. “How the resources of the vessel are allocated and directed are bigger decisions in the end than choosing where to move the vessel or what to fire its weapons at.”

In Heavy Steam, players pilot Steam Titans on a large board. They move through combat zones and fire weapons at each other with the goal of knocking their opponent out of combat. Each round, they distribute energy around their titan and move around, trying to get close enough to use their weapons while staying out of reach of their opponent. Those shots are made by spending steam power to fire a weapon, which rolls a set of custom dice, against your opponent spending steam to roll defense dice – but we’ll get into more detail on that in a moment. At the same time, the player will use strategy and terrain cards to move their infantry soldiers and “mobile cannon” – the Heavy Steam universe’s version of tanks – against their opponent’s cannon and Titan. Those soldiers aren’t effective at taking on a Titan on their own, but they’re great for getting your opponent’s shields down for a kill, so ignoring that aspect of Strategy can doom a lone Titan who tries to play cowboy. You also control some battlefield conditions by playing cards, like taking advantage of a fog cloud, or swamp, to get extra defense or bog down your enemy. Those conditions and reinforcements are randomized to a row of cards available for purchase each round – but that requires using power from your Titan’s command section. 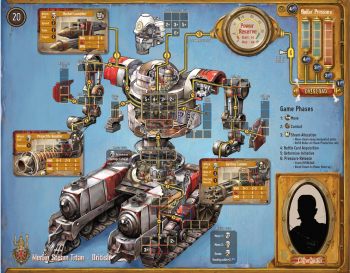 While managing your overall combat strategy, you’ll have to manage the operation of your Steam Titan – just the one, though extra players on each side could control more robots. The Titan has its own sheet, broken down into lines of steam and power flow from the Titan’s boiler, in its chest, out towards its limbs. There are junctions on that path, with spaces for wooden cubes that represent your steam power. You have to move steam towards those limbs to power your weapons, shields, command deck, and movement apparatus. Which is legs for some of the light Titans, but maybe yours is a heavy Titan and has giant trains instead of legs. Whatever your choice of locomotion, the resource management aspect is an awesome layer of game unto itself. If you take damage, parts of your Titan get filled up with damage cubes, keeping you from moving steam outwards towards your limbs and restricting the flow of power. All the while, you don’t want to do too much, because that overflows into your boiler pressure as you go and you can only bleed out so much boiler pressure each turn. Do too much one turn, and you’ll find your tactical options limited the next turn.

That would be the basis for a fun board game you’d play a few times, but there’s a lot of customization available. You can choose from a few different chassis of Titans to duel a friend with, or add light Titans controlled by other players to support the heavier machines. There are also a variety of scenarios with different victory conditions, like destroying troops or crippling your opponent’s Titan. You can also customize the weapons loadout of your vehicle, or give it a new and different pilot with a different special power. It is a game that, if successful, will certainly spawn a variety of worthy expansions.

You can find Heavy Steam on Kickstarter right now. Its funding campaign ends May 13.