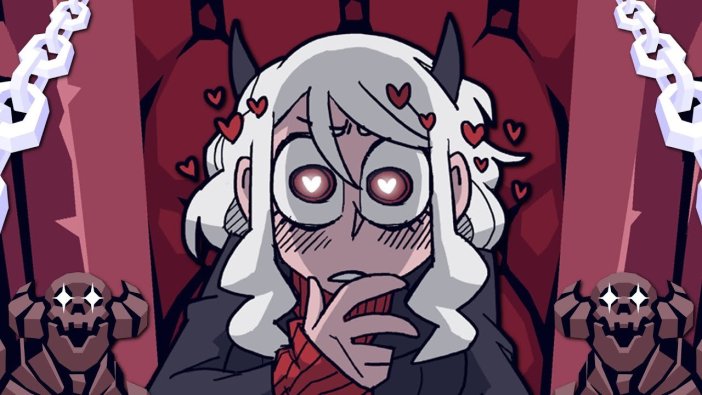 I will always have a soft spot for box-pushing puzzles. One of my earliest memories is of peering over the shoulder of our Mexican exchange student as he masterfully made his way through Paganitzu. A brutally hard shareware Sokoban-like, I had never made it past the first few levels, sending the knock-off Indiana Jones to his death over and over. Arturo, on the other hand, had a knack for the game, weaving swiftly between shots of snake venom and slotting boulders into place with ease. He did not speak much English, and at that age I did not speak much at all, but through that game we understood each other. While free title Helltaker has a decidedly different tone to the aged stylings of Paganitzu, its tight, clever puzzling similarly offers an excellent entry point into block puzzles for a new generation.

The Helltaker is a man inspired by a dream. He has a vision of amassing a harem of demonic girlfriends and, upon waking, conveniently finds a portal leading down into the nether realm. With hope in his heart and cheesy pick-up lines memorized, he descends into the hellscape, winding through traps and obstacles in his search for true love.

Helltaker is made up of a series of short, intricate movement puzzles, where the protagonist has to make his way from one side of the screen to the other, where a potential bride awaits. Blocking his way are boulders, skeleton warriors, spike traps, and locked doors, with the rooms increasing in complexity as the game progresses. Mechanics are introduced smoothly, with early levels focusing solely on block pushing or jumping over spikes and the later puzzles requiring the player to juggle multiple hazards at a time. Adding challenge to the maps is a move limit, with too much time wasted pushing blocks back and forth resulting in the protagonist’s death.

This strict series of rules results in extremely satisfying puzzling. The number of moves given is only just enough to reach the end of the puzzle, so along with figuring out how to clear a path to the demon girl, the most efficient manner of doing so is also vital to discover. The game is short at 10 levels long, but puzzles are just the right kind of challenging, each one building on what the player has learned before.

The clean difficulty curve has an abrupt spike in the final level, however. Up to that point, Helltaker is a slow, contemplative game, the kind where sitting and analyzing the screen is more important than the actual moves eventually taken. The last level, however, has a violent shift in genre, a bullet hell-like boss showdown that would feel more at home in a genocide run of Undertale. Rather than one’s logic abilities, this boss tests reflexes, with white chains flashing across the screen and a meat-grinder conveyor belt ensuring the protagonist is constantly in motion.

The encounter is not entirely unfair: the Helltaker can take four hits before he is defeated, and the game saves at each phase of the boss. So the player is not forced to go through the whole fight each time, but the genre change is a slap in the face. I got through the boss, eventually, but it was a frustrating slog. Perhaps a few smaller mini-boss encounters in the same style could have been seeded earlier in the game, so the player has time to adjust to twitch-reflex gameplay before the challenging final boss occurs.

From beginning to end, Helltaker has a simply gorgeous art style. Story segments are beautifully hand-drawn, with each of the devilish love interests displaying a distinct personality. In-game the visuals are bright and cute, Helltaker and enemies alike bouncing in time with the excellent chiptune soundtrack. The screen is highly readable, with the player instantly able to see where boulders can be pushed and where spike traps lurk. 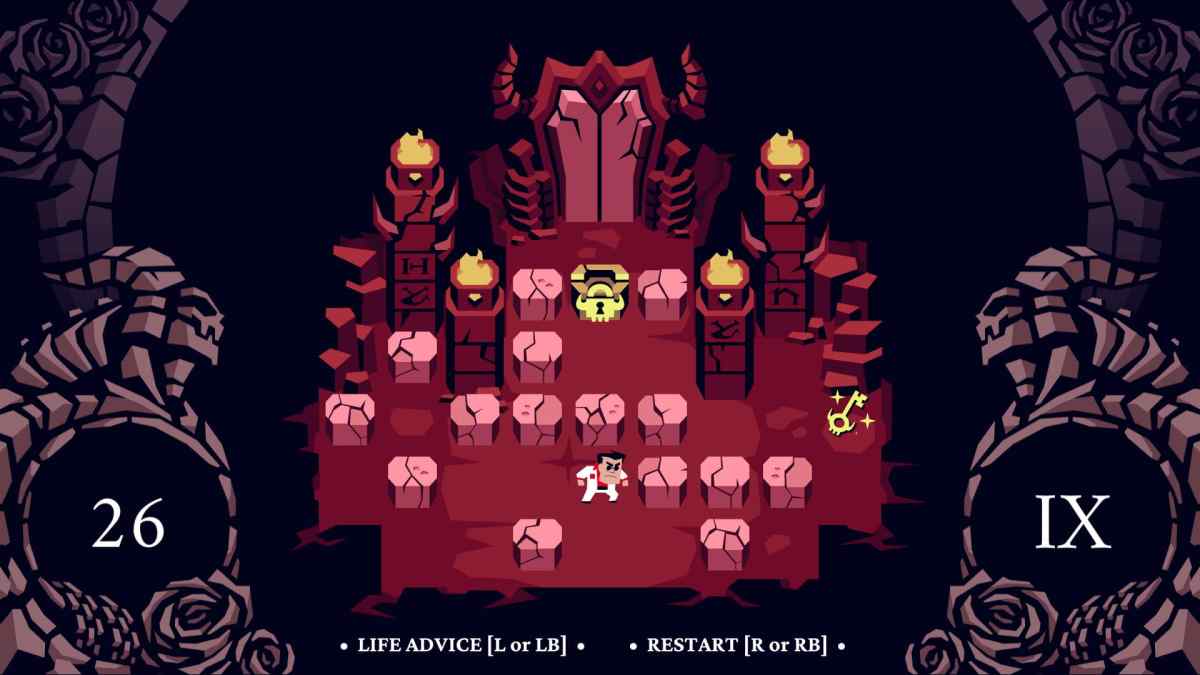 The story of Helltaker is thoroughly silly, but it provides a nice through line to link one level to the next. I enjoyed that the protagonist wins the girls over by being thoughtful and considerate, offering coffee to an exhausted demon and promising to play strategy games with a lonely girl. One immediately expects the kind of character that desires a harem of women to be unpleasant, but the Helltaker’s intentions are good, even if he is unprepared for the reality of actually dating a bunch of demons.

I was utterly charmed by Helltaker. Even without the warm and fuzzy feelings I get from things that remind me of my childhood, the game’s solid puzzling and strong aesthetic would make Helltaker appealing to anybody. For those who wish to support the developer, a digital art book can be purchased on Steam.

Next week we will be playing Island Saver, a first-person adventure game about cleaning up an island and saving its animals. The game can be downloaded from Steam. If you would like to share your thoughts, discussions will be happening in the Discord server.