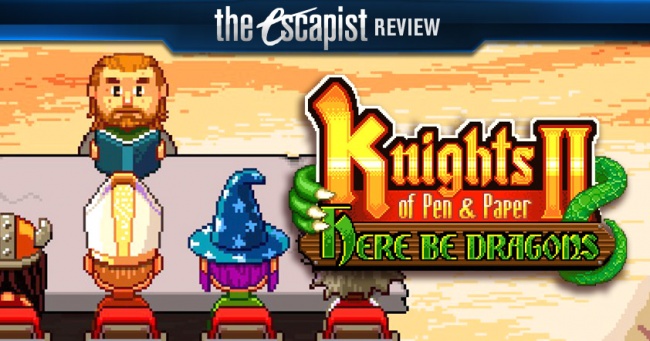 Editor’s Note: This review covers Here Be Dragons, the new expansion for Knights of Pen & Paper 2. If you want to know more about the core game, you can read our review right here!

Back in October 2015, Paradox Interactive released Knights of Pen & Paper 2, sending gamers on a quest to save the retro world from the evil Paper Knight. Your heroes became sky pirates, saved Big Town from the evil “boosted” bandits, and traversed to the farthest reaches of the map where even the Dungeon Master didn’t know what was happening.

Here Be Dragons begins after completing the main campaign. Eager for more XP and loot, the game’s characters beg for a true test of their abilities: Dragons. The Dungeon Master points to the Great Paywall at the south of Paperos, gateway to the land of Expandria. When the party arrives at the castle, they learn King Smarty slew all the dragons ages ago, but his daughter Princess Iridia has a backup quest for your heroes instead. The protagonists quickly find out the king isn’t that great of a dragon slayer, and anyone familiar with the game can guess how quickly the story leaves the rails from there. 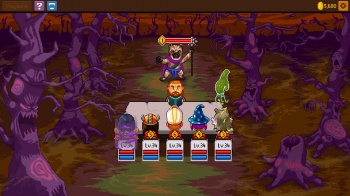 Here be Dragons also introduces new enemies to the game, including Pugbears and Attack Beavers. That visual image you get in your head when hearing those words? It;s exactly what you can expect from them in game. Alongside them are ice trolls, spiders, and undead creatures reskinned from the base game. When facing these adversaries, you have a chance to train someone with the newest class added in Here Be Dragons.

You’ll also gain access to a new Knight class by completing a questline where your party goes to Knight School. Knights resemble the previous Barbarian class, in that they use a status ailment as a power source mid-battle. They make good use of their Bulwark and True Strike active abilities: Bulwark builds up your threat level so enemy attacks focus on Knights, while True Strike uses your threat stat to buff critical attacks. It’s useful for taking the enemy attention away from support characters in your party, letting them finish the bad guys off while they’re distracted. If you already have five characters in your party, the tavern at Expandria Castle will let you swap out heroes to try the Knight out. While it wouldn’t serve much use in the expansion, adding a Knight to a base game campaign run could be interesting. 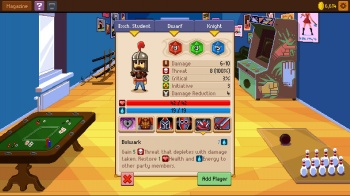 Unfortunately, Here Be Dragons comes with some “drag-ons” as well. Many of the quests require you to visit Paperos itself, reusing dungeons and settings from the base game. In terms of the expansion’s story, it does help Expandria feel like a part of Paperos as a whole. The trouble is, Here Be Dragons backtracking takes it past the reasonable limit. There was a missed opportunity here to flesh out Expandria, but too many quests send you to Paperos for a single item. The developers were certainly creative in reusing base game assets, but even as an expansion Here Be Dragons relied on them heavily.

As a post-game expansion, starting Here Be Dragons at level 30 means you’ll blow through most encounters without any issue. The only time the difficulty spikes is when your party faces an actual dragon. When fighting dragons, an area effect called “dead zone” activates, which prevents you from using resurrection items to revive fallen party members. Dragons also have the ability to scare your characters into leaving the game table for a turn. On top of both of those things an area effect named “Dragon’s Aura” is active, which transfers status ailments from the dragon to a random party member. These conditions make dragon fights a formidable but satisfying challenge, and a great payoff for the expansion.

Rewarding challenges aside, the Rainbow Dragon battle will push your patience to the limit. Towards the climax, your party chases the Rainbow Dragon on an airship where a “turbulence” trait is in effect. This has a chance of stunning your party members at the start of every turn, requiring you to grind past Level 40 if you wish to survive. There’s an aspect of luck to it with resisting the stun effect, but the outrage outweighs the fun after a while.

Here Be Dragons also introduces a Bestiary to the base game. This is a new guide that catalogs every monster type, and sorts them based on difficulty level. Each entry describes their general size, damage, health, abilities, and other combat stats. Defeating enough of an enemy type also unlocks their vulnerabilities (highly effective party abilities in battle), and a “Soft Spot” perk dealing two extra damage points against them. What’s infuriating, however is the Bestiary has no dragon chapters, which is a huge missed opportunity given this expansion’s name.

Knights of Pen & Paper 2 – Here Be Dragons does a fine job at expanding on the base game experience. It provides the same level of entertainment, even if it suffers from level grind and repetition, and the Bestiary is a useful new feature. Sadly the expansion still feels lacking when compared to the experience of the base game. Here Be Dragons may have dragons, but outside of that it feels more like a padded add-on than a proper expansion, packed with irrelevant fluff which drags the game down.

Bottom Line: Here Be Dragons is a fun, if modest and repetitive expansion that stays true to the gameplay of Knights of Pen & Paper 2.

Recommendation:This expansion is for Knights of Pen and Paper fans who want a chance to return to Paperos, but newcomers should try the base game if they want to give the expansion a go.