I think I can make a pretty good educated guess as to how Alone in the Dark: Illumination came about. At some point someone got really excited about a new idea for a multiplayer shooter combat mechanic involving monsters being invulnerable unless under light. Unfortunately they discovered after making the game that it didn’t work at all. But rather than doing the sensible thing and scrapping the project, they seem to have just hastily tied it up with string and quietly chucked it out there out of the ambivalent hope that it might make a little bit of money back while somehow not ruining what reputation they have left. Which wasn’t much, considering that the Alone in the Dark franchise peaked the moment it left the gate in 1992 and has been rolling from downhill slope to piss puddle ever since.

Of course, there was a lot more than just a flawed core idea working against Illumination, like the awful sound design and unrelenting tedium, but these were just the weeds sprouting out of already-poisoned Earth. The question is, how would one fix it? Assuming we’re past the point of razing it to the ground and recycling the ashes as school lunches. 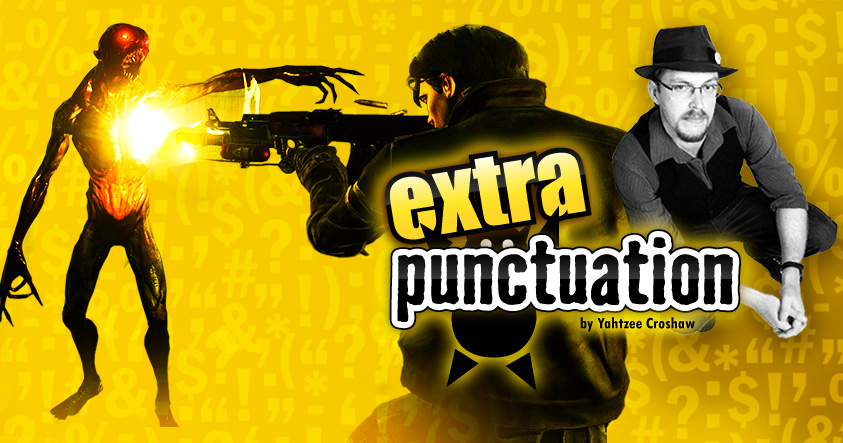 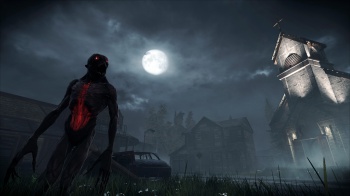 Part of the problem is that the whole ‘monsters are only vulnerable in light’ thing is a mechanisation of what should already be a built-in factor of a standard survival horror setup. By which I mean, in any game with a serious dark/light dichotomy, monsters are automatically more vulnerable in light because then you can see the fucking things, and attack them. Whereas the player is at a disadvantage in darkness because monster AI doesn’t usually factor in visibility outside of games with stealth elements.

So when you force the issue by making monsters literally invulnerable in darkness, you’re just removing the game’s organic potential. And creating annoying moments when monsters have brain farts and decide to stop pursuing you and lurk infuriatingly just on the outside of the light for no apparent reason. If the game truly had been absolutely pitch dark and you just had to run whimpering from light source to light source with no idea what was lurking in the shadows around you, that would achieve the effect you want without needing the whole light-vulnerability mechanic. If they were going to do that, though, they’d probably have to take all the red glowy bits off the monsters.

The other problem with AITD:I (I’m just going to pronounce that as Ay-Tiddy) as a survival horror game is that atmosphere does rely rather heavily on pacing, which means that there have to be both peaks and troughs. A big part – some might say the biggest part – of an atmospheric horror experience is the anticipation, the buildup of tension until the point that the horror arrives and the tension can be paid off. There is therefore no atmosphere if the horror never fucking goes away.

My first instinct was to turn on a light and then park myself under it like a cat in a sunbeam and wait until all the nearby monsters came to me so I could kill them all, clear the area, and then move on. That was my first mistake, because monsters respawn infinitely, and I quickly went nowhere fast. Experimentally I then decided to see if I could just jog past all the monsters and make a beeline for the objective, and it turned out that I could. But it still wasn’t doing anything to make the game atmospheric, because I had a constant conga line of nasties trailing off me like poo out of a fish’s arse that I had to deal with by occasionally turning around and blowing them all away like we were playing Grandmother’s Footsteps. 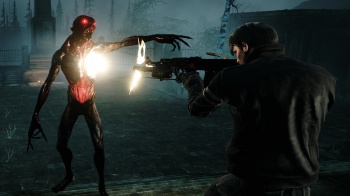 They made the Silent Hill 4 mistake. A big part of survival horror is exploration, and careful searching of all the nooks and crannies for the important items and pickups that will help you survive. This gameplay is not enhanced by constantly harassing the player with baddies, because it means they have to expend a potentially unending amount of health and ammo as part of the effort to find more health and ammo.

What I haven’t considered thus far is the possibility that Ay-Tiddy is aiming more for action-horror than atmosphere-horror. Exhibit A: co-op multiplayer. As I’ve said many times over the years, in reviews of games like Dead Space 3 and F3AR, atmospheric horror in a co-op game is pretty much a lost cause. You can’t feel alone and scared and hunted by evil when there’s someone else there sprinting into a wall. Action horror, on the other hand, of the big guns and relentless waves of monsters variety, that’s an easier fit for co-op. Left 4 Dead being the obvious example.

But the problem with Ay-Tiddy as a multiplayer action game is that there is no reason to have other players around. Left 4 Dead is very firmly built around the co-op because there are far too many aggressive enemies for one player to cope with, not to mention the occasions when you need another player to punt off a Hunter or knock off a Jockey. That’s why you have to drag three NPC players around if you show up stag. The fact that Ay-Tiddy lets you play by yourself without NPC players (although I dread to think how that would have turned out, going by the AI of the monsters) illustrates that the whole co-op aspect is so much piss in the wind.

Besides, you need to have action before you can be action horror. A sense of action, anyway, and the terrible sound design and slow monsters don’t raise much more than a sense of boredom. Constantly respawning monsters also doesn’t help because action is about decisively bringing things to a conclusion. If you want a short summary, action horror is about standing your ground and pushing your way through hazards, and atmospheric horror is about furtively darting from room to room trying to avoid them.

So, in summary, I would have fixed Ay-Tiddy by making it sit down and figure out what the hell it wanted to be. Monsters vulnerable in darkness might have worked as an action horror game if it took place in a fixed small arena, with fast monsters that moved predictably so you could direct them into light, something a bit more tower-defensey. Alternatively if you want to lean towards atmospheric horror, drop the multiplayer and the darkness vulnerability mechanic, up the contrast between the dark and the well-lit areas, redo the soundtrack and make the monsters stop chasing the player as soon as they break line of sight or get into light. Consider that my consultancy, Atari; drop the money in the usual spot.