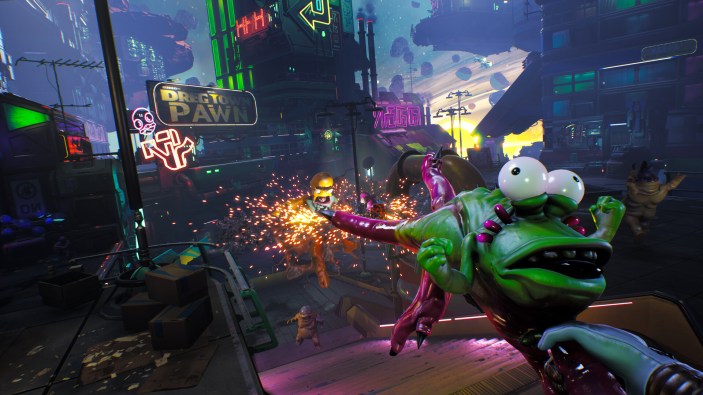 This article contains very light spoilers for High on Life in its discussion of how the Gatlians contribute to the form of video game narrators.

From Doom to Halo to Metro, I’ve bounced off so many first-person shooters that I don’t pay much attention to the genre anymore. That’s why I wasn’t expecting to enjoy High on Life, even with its vivid color and brash tone. And yet, after the obnoxious tutorial sequence and brief exposition, I found myself compelled. It wasn’t the competent gunplay that hooked me, nor the what-the-hell quality of the story, but instead what Kenny (and the other talking weapons) bring as narrators of the experience.

When we talk about narrators, it’s most commonly in their first-, second-, or third-person role as storytellers in literature or as voice-overs on screen. But that’s an oversimplification. Narrators serve a much more significant purpose than just telling the story; they are central to our involvement in the experience by withholding or divulging information, being an emotional core, or gatekeeping the tone.

That remains true, regardless of whether they are the disembodied third-person storyteller of J.R.R. Tokien’s The Lord of the Rings, the first-person diary excerpts from What Remains of Edith Finch, or the unusual, diegetic second-person approach used in High on Life. 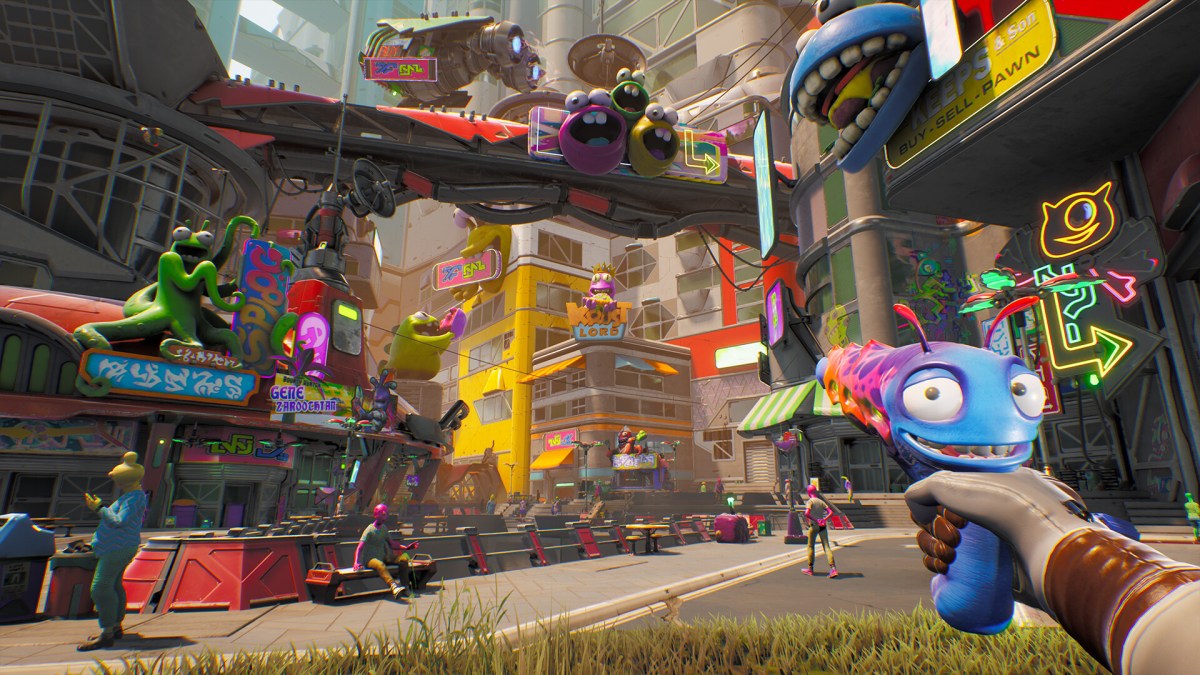 What if there is no apparent narrator?

That’s often the case in films and games, where the explicit voice-overs of a Forrest Gump or Biomutant are relatively few.

Such works purport to reflect an unvarnished reality. It’s a lie. What the camera shows is always a construction. These stories are fiction, after all. The third-person objective narrator isn’t really objective — if they were, we readers would have followed Gandalf’s fall through the mines of Moria as it happened, rather than learning about it only afterwards. There would be no tension about the possibility of Saruman discovering Merry and Pippin, no surprise, no relief. Even when the narrator appears invisible, they remain a tool of the author, their inclusions and elisions providing texture.

The camera usually takes the same approach, with images taking the place of words. Mise en scène determines what the audience knows and, to some extent, feels. A shot might linger on an item or a glance. In doing so, it acts in lieu of a narrator to draw attention to that thing as a subject. Alternatively, the camera might shy away from showing something to prompt fear of the unknown, as in Alien. Features like color grading and framing can influence the feeling of a film, creating contrasts as disparate as the gloom and loneliness of The Drover’s Wife and the frantic energy of The Mitchells vs. The Machines.

Rather than disappearing, the narrator simply adapts to the form required of it. A ready example of that in video games is how the one-take camera of God of War Ragnarok endeavors to create a sense of intimacy. Again, it comes down to framing, level design, and art, now working in tandem with the amount of control players have over what they see. The much-derided “slow walk” and “squeeze through a crack” sequences often focus a player’s attention in much the same way a narrator would in another medium. 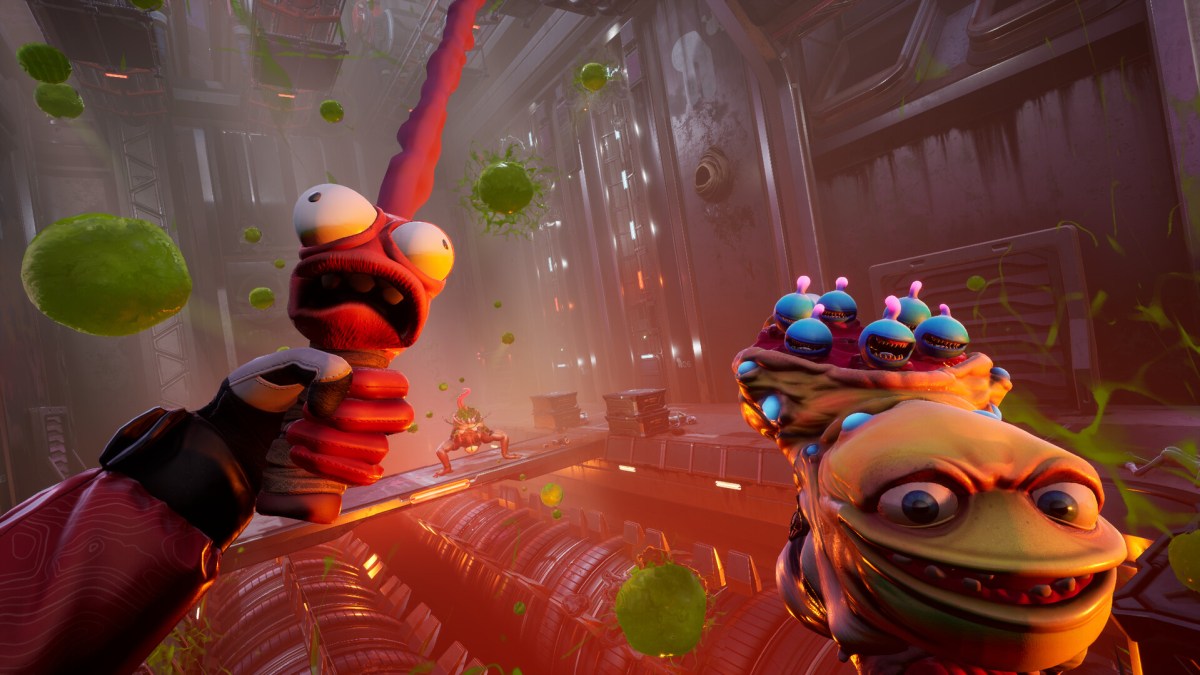 So, how does the narrator work in High on Life?

As narrators, the Gatlians feel like they occupy an intersection of various other narrational formats in video games. One thread is audio logs, as they seamlessly provide deeper context about the backstory as you explore. Another is the quippy snippets of characters like Nathan Drake in that their interjections help to sell the drama and action of the moment. And third, they embody a much rarer kind of real-time gameplay narration.

Perhaps the best known predecessor of High on Life in this respect is Bastion, the breakout hit from Hades developer Supergiant Games. The narrator there feels like a grizzled, Old West type. It’s the kind of voice you might associate with Stephen King’s The Gunslinger or Stark Holborn’s Ten Low, and it helps to sell the epic, cataclysmic vibes of Bastion. 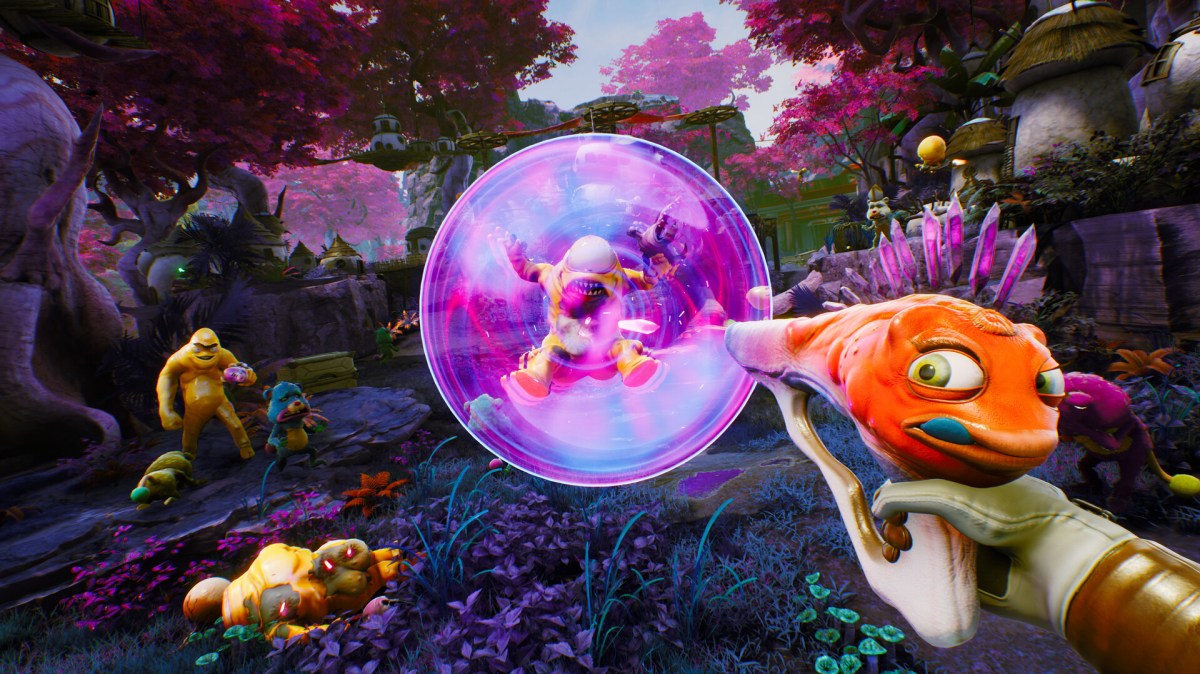 That game’s narration was highly acclaimed because it felt genuinely reactive, and that’s a feeling echoed in High on Life (with the proviso that the Gatlians are a much more cynical, crass voice). Much of the running commentary seems baked in, such as when Kenny references Super Lucky’s Tale and the Mario series during a platforming section or when he chastized me for choosing to help an unscrupulous scientist, but that’s not always the case. There was one point in my playthrough when Kenny poked fun at my tendency to overuse the sprint button. More frequently, you get jibes about how long it’s been since you’ve used a particular Gatlian and reminders to use their alt-fire modes.

The end result of these multifarious prompts is that the game breaks down the fourth wall. By effectively removing the player character from the story and having the Gatlians natter on at you, High on Life embraces you. You don’t quite play as yourself — there is, after all, a sister and a house in the story — but you definitely don’t play as a Guardian or Master Chief or Doom Slayer. Even many RPGs struggle to create such a powerful sense of immersion, burdened as they are by dialogue choices and the sheer weight of their systems.

Thanks to the Gatlians, High on Life does away with that friction. Even while the game throws back to the prescriptive design of yesteryear, it centers players in a postmodern way. On one hand, you are an object in the story, fundamentally without agency. On the other, you are the subject of the experience.

The Gatlians create that sense by talking to you as the player rather than the avatar. And that’s what gives High on Life its unique tenor. Yes, it’s a comedy in a medium where the genre is rare. And yes, it’s an utterly absurd, obnoxious production. But by texturing the story in a way we don’t often see in games, the developers bathe their latest production in a personality that you can neither ignore nor forget.