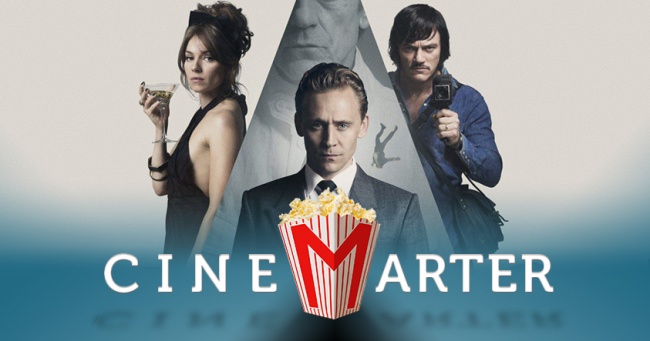 Filmmakers have been trying to get an adaptation of J.G. Ballard‘s novel High-Rise made for over 30 years. One’s finally been created, courtesy of director Ben Wheatley and screenwriter Amy Jump. The film, a savage project that depicts what happens when all classes of society find themselves living together, comes across as something that is as meaningful now as Ballard’s novel was in 1975 – maybe even more relevant. Society hasn’t exactly fixed all of its problems since then, after all.

The idea here is that there’s a large apartment building that has been designed to house all classes of people and provide most of the amenities that a person would need – to the point that leaving the building isn’t a necessity. Our lead is Dr. Robert Laing (Tom Hiddleston), who has the nice suits and money to blend in with the wealthy, but the type of attitude that makes him more likely to fit in with the lower class. As such, he acts as the audience’s liaison between the two groups – and the middle-class, where he technically falls. 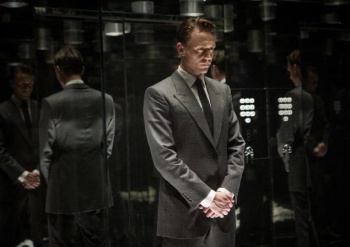 The building was designed by Anthony Royal (Jeremy Irons), who lives in the penthouse and whose last name isn’t at all subtle – neither is the film. Initially, the building seems like a good idea. On paper, it is. But the cracks are almost immediately apparent. Garbage chutes begin to back up. Short power failures are present. And some of the parties get out of control. But those become nothing when compared to the utter chaos that ensues in the film’s second half, which is shown briefly in the first scene before flashing back to the three months prior that led to events that wouldn’t be out of place in a post-apocalyptic movie. Three months!

High-Rise wants to showcase to us how quickly society breaks down, and take a gander at precisely why. Mostly, it sees people on all sides discontent with the current situation, so they break the rules to better their situations – only causing the other side(s) to retaliate with even stronger fervor. Add in wild parties and characters who are a little on the crazy side, and you can see exactly how this societal microcosm could come crashing down.

High-Rise is a fascinating, thrilling, and darkly humorous piece of filmmaking.

Those characters are played by some pretty accomplished actors, too, which makes them and their actions even more enjoyable to watch. I’ve already made note of Tom Hiddleston and Jeremy Irons, but we also get the likes of Sienna Miller, Luke Evans, Elisabeth Moss, James Purefoy, Sienna Guillory, and Keeley Hawes in supporting roles, all of whom get more than a couple of fun/depraved/insane moments. Have you previous seen a Renaissance-style costume party set to ABBA? Well, if you watch High-Rise, you will.

From a pure filmmaking perspective, High-Rise has a lot going for it. It is a Ben Wheatley film, after all, and he’s a director who exudes quality. From little background details, stylish cinematography, a couple of interesting editing choices, and a wonderful soundtrack selection, High-Rise has always got a couple of things to look out for. Add in strong acting and the aforementioned social commentary, and you’ve got a film that is always on-point.

If High-Rise does have a problem, it’s a lack of characters who are in any way relatable. It comes down to why you’re watching the movie, and if you can change that. If you’re here to watch likable, relatable, and deep characters, then you’re not going to like this film. They’re here to represent various facets of society, and to showcase a hypothetical, but metaphorical, situation. They fulfill that purpose perfectly, but it makes High-Rise different from most movies. To some audience members, that means it’ll be inaccessible.

As a biting form of social commentary that’s even more relevant now than it was when the novel was written in 1975, High-Rise is a fascinating, thrilling, and darkly humorous piece of filmmaking. It’s stylish, angry, and very entertaining. It’s always got multiple elements working, it’s got a fascinating cast of characters portrayed by excellent actors, and it’s purposeful – even if it’s not particularly subtle about it. Then again, neither was J.G. Ballard’s novel. High-Rise deserves the penthouse suite.

Bottom Line: High-Rise is the type of angry, biting social commentary we need in the movies every now and then.