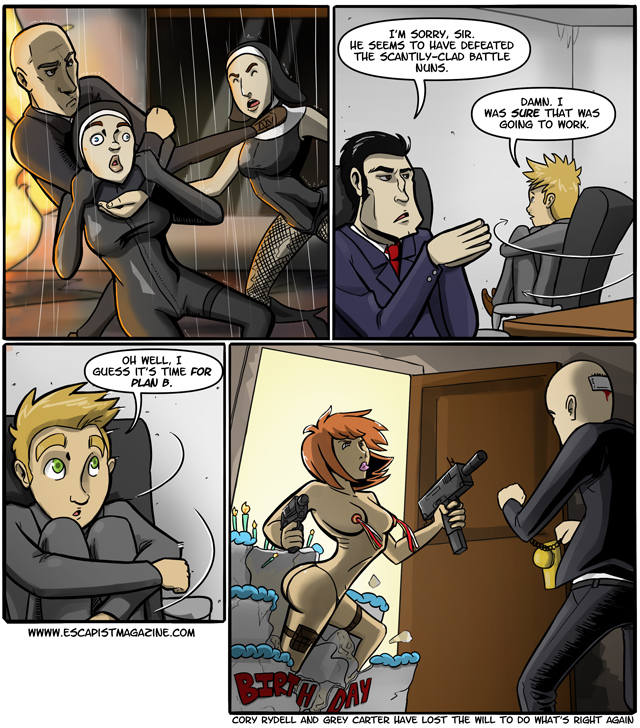 I’m actually quite fond of the new trailer for Hitman Absolution. Mostly because it’s the kind of culturally worthless, dumb-as-a-box-of-hammers nonsense that makes my job easy – it’s like shooting fish in a barrel, only the fish are wearing leather dresses, suspenders and … fishnets, I guess. I have a habit (DOHOHOHO), a very poor one for a satirist, of assuming most creative stupidity is ironic. I can’t imagine whoever came up with the short managed to say the words “battle nuns in lingerie” without sniggering just a little bit – at least I hope not.

Anyway, the trailer has the internet all aflutter for a couple of reasons. The first, is that it criminally misrepresents the game, and considering fans are already terrified that Absolution is going to turn the series into a mindless third-person shooter, that’s a very poor PR move. That being said, the series has never been completely serious, and it’s certainly experimented with the cheesecake+murder=profits² equation before, both in the games and in its advertising. Our bald protagonist has murdered people in strip clubs, brothels and parties filled with gimps, the series has always been sexually charged.

The second issue, and the one I think really deserves some debate, is that some think the ad is fetishizing violence. As Keza MacDonald from IGN put it:

“There’s no context, no mitigating circumstances – this is violence-porn, put together to look cool. Is that what people think gamers find cool? Breaking the noses of women in suspenders in slow motion? This trailer panders to violence-worship and misogynistic desires that have nothing to do with the game, and that surely don’t exist in the minds of Hitman fans.”

It’s a good piece, though one I mostly disagree with. Hitman, particularly Blood Money, has always been about violence worship. While other games tend to trivialize the physical act of murder, the series stands out because it encourages an exacting, elaborate, almost ritualistic approach to inflicting harm upon virtual human beings. The fact the same degree of violence present in every previous game is somehow distasteful now 47 is hitting a woman strikes me as disingenuous. MacDonald argues that the trailer implies that the women deserve to be attacked because they’re dressed like going to a sexy nun Halloween party. I think that’s projecting an agenda onto an ad too dumb to actually contain one.