If you’d told me even just a few years ago that Homeworld would be seeing a revival I probably wouldn’t have believed you. With more than a decade separating us from the franchise’s last major release in 2003, it was one of those franchises that I’d just kind of accepted as being done. Save for the series’ fans there was no scramble for it to continue. The gaming world at large seemed content to let it fade into obscurity.

Then Gearbox’s Randy Pitchford got involved and everything changed. One of those aforementioned fans, Pitchford used the demise of THQ to scoop up the rights to Homeworld, Gearbox then released Homeworld Remastered Collection in 2015 and, in that one fell swoop, revitalized the franchise as something that people pay attention to. Now Homeworld fans have received something even more inconceivable: a prequel to the original game. And wouldn’t you know it, it’s actually pretty good. 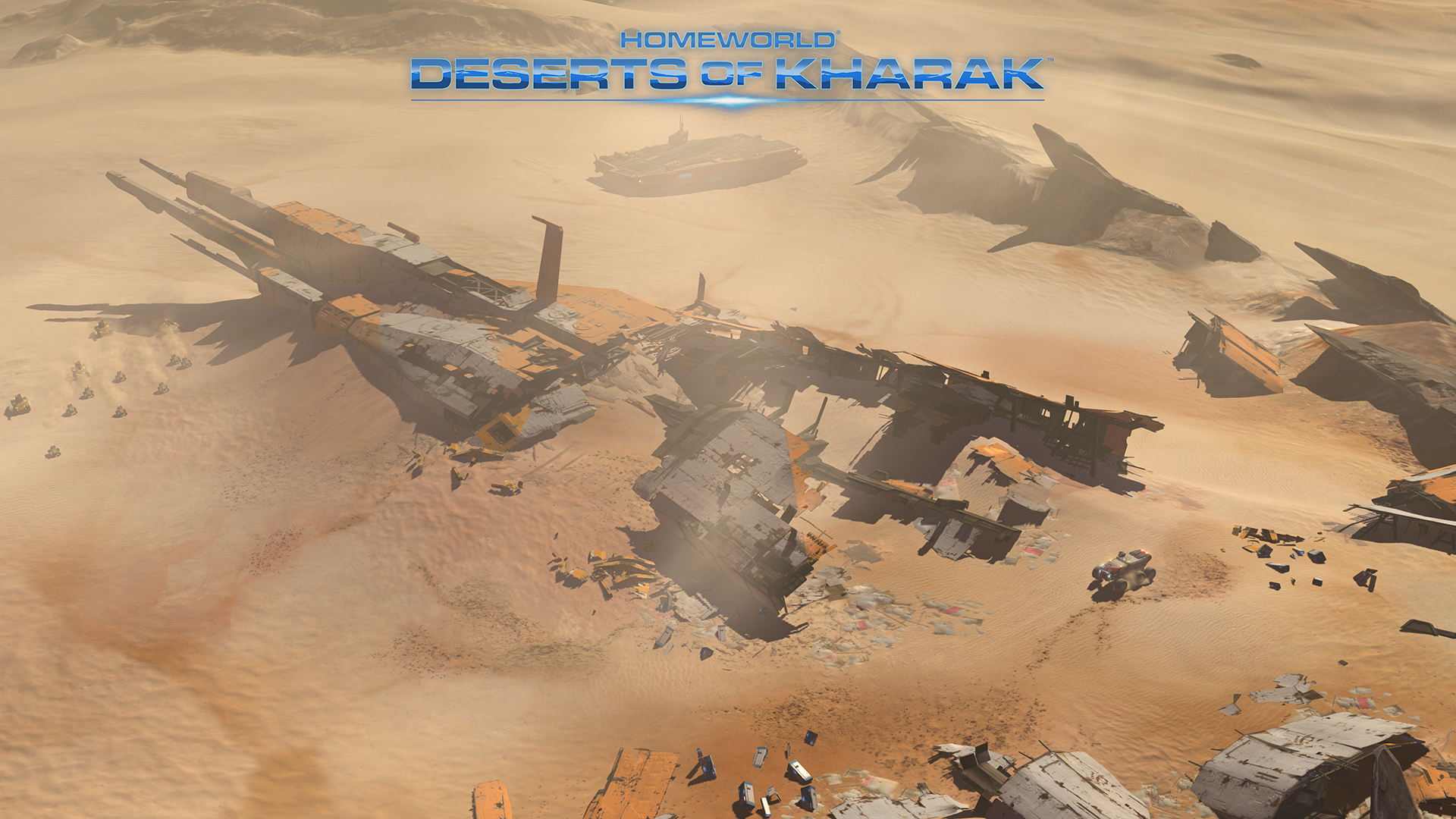 Developed by Blackbird Interactive, Homeworld: Deserts of Kharak follows the events leading up to the discovery of the artifact that launched the plot in the original Homeworld. Grounded as it is in existing lore however, the game is also probably the most wildly different entry the series has ever had. The biggest change, of course, is the focus on ground combat as opposed to the any-direction 3D space combat that made the series famous. I’d be lying if I said that the game doesn’t lose something from this shift. There’s no lack for real-time strategy games centered around ground battles and, in some ways, Deserts of Kharak doesn’t feel that different from other titles in the genre. For all of its similarities to other games though, it has enough unique and Homeworld-ish that it still stands out from the crowd.

The combat relies heavily on a sort of rock-paper-scissors system where each unit can be countered by another unit. AAV’s (Armored Assault Vehicles), for instance, are the backbone of your forces. Immediately after their introduction however, you’re also given Rail Gun units which can pummel them from afar. The Rail Gun units, in turn, have a hard time contending with LAV’s; lightweight dune buggies that would otherwise only be useful for some quick reconnaissance. Considerations like line-of-sight (you can’t shoot what you can’t see) and stat bonuses awarded for holding the high ground add even more layers to an already solid system. In true Homeworld fashion, Deserts of Kharak also has persistent units. Whatever units you have at the end of a mission will be your starting force at the beginning of the next one. This is an idea I love and it adds a lot of value to individual units that the player otherwise might use as mere cannon fodder.

I also really loved the game’s approach to aircraft. Unlike the original Homeworld, you don’t have squadrons of fighters perpetually in flight waiting for their turn to unleash hell. Any fighters you build will have to hang out in your home base, the sand-crawling carrier Kapisi, until they receive orders and can launch to attack. This limitation might feel frustrating at first, but it adds a lot to the game’s tactical experience. Fighter attacks can be devastating, doling out heavy area-of-effect damage that your ground units can’t. By limiting them however, they’re transformed into a valuable resource that can turn the tide of a difficult battle if you use them wisely. 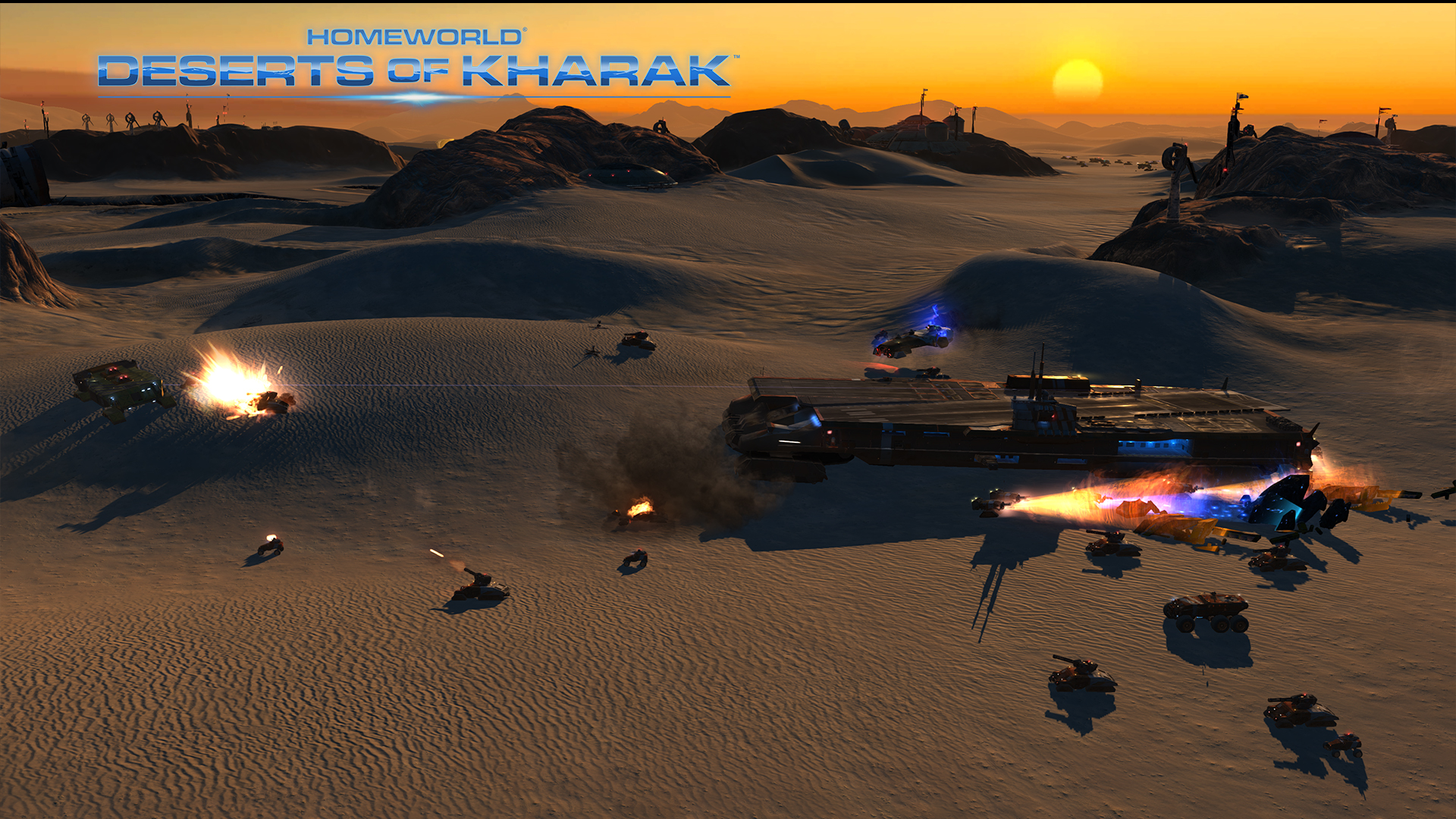 And trust me when I say that Deserts of Kharak has plenty of difficult battles. It’s a tough game at times and doesn’t shy away from placing you in situations where your S’jet expeditionary force is completely outmatched by their Gaalsian aggressors. Resources on many maps are often scant, and if you fail to plan ahead and squander your units you’ll frequently find yourself unable to complete missions and forced to restart. To be sure, there are spots where this probably could have been handled better. Researching upgrades for your units can be really expensive and it’s easy to overspend and then find yourself lacking the resources you need to finish a mission. That small stumble however, is well-worth those moments where you find yourself on the edge of your seat hoping and praying that your airstrikes will arrive in time to rescue the outnumbered ground troops you need to finish your mission.

Unfortunately, as much as I enjoyed the gameplay of Deserts of Kharak, its story left some things to be desired. Taking place about a century before the events of the original Homeworld, it follows the efforts of the clan S’Jet to track down the “Jaraci Object,” also known as the McGuffin that led to the construction of the Mothership from the original game. Opposing the S’Jet are the Gaalsian, a rival clan exiled into the deserts at the end of another war hundreds of years ago. Dogged by their foes at every step, the S’Jet expedition has to struggle to survive against overwhelming odds as it journeys deeper into the planet’s deadly deserts.
The plot borrows heavily from the structure original Homeworld and, while it’s obviously intentional, the parallels lead to some of the narrative’s biggest problems. The story isn’t done badly; the writing isn’t poor and the game’s cinematic sequences are absolutely gorgeous to watch. That said, it’s also nowhere near as engrossing as its fifteen-year-old predecessor. When the Mothership launched at the beginning of Homeworld, it felt like a genuinely dramatic moment. Granted, Adagio for Strings probably helped that a bit, but that doesn’t change the fact that the launch of the Kapisi has nowhere near as much weight. The Gaalsien likewise, never really develop like a really imposing enemy. The player’s told that they’re powerful and doing bad things, but their actual appearances in the game don’t do much more than paint them as generic baddies out to muck up your plans. The Taidan in Homeworld were never delved into too deeply either, but we at least got to see them destroy an entire planet. As multiple Star Wars can attest, that’s something that leaves an impression.

Mind you, there are many who will likely see my problems with the game’s story as quibbles, in part because they kind of are. On the whole, Deserts of Kharak does a fantastic job of nailing the small touches that make something feel like a Homeworld game. The UI looks like an organic offshoot of the series’ existing games. The ambient sounds and in-game dialogue are also pitch-perfect replications of what was used in the past. The units, land-locked as they are, even move like their space-based counterparts. Its developers clearly put a ton of effort into making this more than just an RTS game with “Homeworld” slapped on the front cover. The end result is a game that might not be perfect, but nonetheless manages to be a worthy entry in the Homeworld franchise. Here’s hoping it’s not the last.

Bottom Line: While the story sometimes sticks too close to familiar ground, Deserts of Kharak is a fun and challenging RTS title that’s a worthy addition to the Homeworld franchise.

Recommendation: A must have for Homeworld fans and a great buy for fans of real-time strategy.