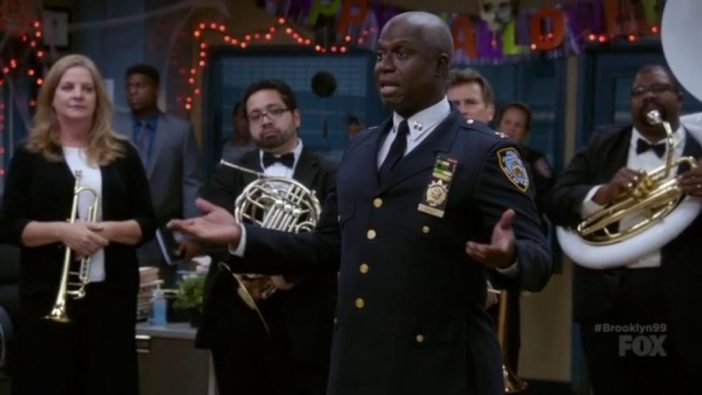 “You know what the toughest part about being a gay black police office is? The discrimination. I believe that is what you call observational humor.” That line, delivered in a monotone voice to utter silence, was what made me fall in love with Captain Raymond Holt from Brooklyn Nine-Nine.

Holt is the embodiment of everything wonderful about the comedy series, but that wasn’t clear in the show’s earliest episodes. He was initially framed as a robot, a comedic extreme of the no-nonsense police captain trope. He was the straight man, letting the absurdity of the ensemble cast bounce off him and amplifying it by not reacting. That was fun enough, but there was one part of the characterization that rubbed me the wrong way at first. Holt is openly gay and happily married from the first episode and it felt like they were trying too hard to play against the flamboyant gay man stereotype, making his very identity a joke.

The following seasons changed for the better. The writers started using Holt the same way Leslie Nielsen was in his later career. He became a comedic straight man who was also hilarious on his own. Modern Holt is picayune, sarcastic, sassy, and competitive. He’ll leave a detective stuck in a vent to settle a petty feud and bring in a full brass orchestra into the precinct to make a point, but he still thinks a piece of unbuttered toast is an “indulgent” breakfast. The signature monotone voice remains, but he’s broken out of his box and given room to breathe as a character. The show is better for it.

As the character got more screen time,  I realized that my initial reading of him was all wrong. Holt’s husband Kevin is just as monotone as he is. They never engage in public displays of affection other than a firm handshake. Yet there is so much genuine love between them that it melts my heart. Holt being gay wasn’t a joke, but a unique way to portray a gay relationship without relying on stereotypes.When any of Holt’s friends talk about him, they call him hilarious and charming. That confuses his detectives, who don’t see him as anything but a stone-faced no-nonsense captain. Even more peculiar is that Holt never changes his behavior around his friends. They just view those same traits as funny and charismatic.

Context is ingrained in Holt’s appeal. He first performs his “You know what the toughest part about being a gay black police office is?” joke for his assistant who doesn’t find it funny and responds only with confusion. But when he tells the exact same joke while presiding over a meeting of black gay and lesbian NYPD officers, the crowd goes wild.

The best lesson that Captain Holt can teach us is that characters need not be set in stone, that sometimes letting them evolve can lead to more interesting stories. Holt was boring in early seasons. Now he’s a fan favorite. That wouldn’t have been the case had the writers kept him as the stone-faced police captain. Holt is unequivocally better when he can surprise us, showing a side of the gay and African American experiences that most audiences haven’t seen before. I wish that more showrunners were brave enough to set their characters free, to let them be the most compelling versions of themselves. Captain Holt is proof that change can lead to greatness, and I am excited to see what new stories are yet to be told with this icon of 99th precinct.