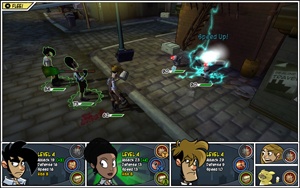 At this year’s GDC, I sat down with two guys from Hothead Games, developer of Penny Arcade‘s Penny Arcade Adventures: On the Rain-Slick Precipice of Darkness, to take a look at the game and talk about the resurgence of the adventure genre.

I stumbled upon Hothead serendipitously. A friend of mine mentioned the guys doing the Penny Arcade game were at the show and were keeping a relatively low profile, sequestered away in the Canadian game developer booth, flanked by an army of PR professionals from the varying provinces. I first rebounded off their atmosphere because I spoke to a nice lady from Alberta, who didn’t have the authority to introduce me to the Vancouver, British Columbia-based developer, but on a second approach I managed to get a hold of Carolyn Carnes, who squeezed me into Hothead’s quickly filling schedule.

Inside I met Joel DeYoung, Hothead’s chief operating officer, and Ron Gilbert of LucasArts adventure fame. Gilbert worked on The Secret of Monkey Island, Sam & Max Hit the Road and Full Throttle in the past, and Hothead brought him onto the team as creative director.

RSPD is an adventure game set in an alternate version of the 1920s, where H.P. Lovecraft’s writing was nonfiction and giant, animatronic appliances terrorize the surroundings. Gabe and Tycho, the comic’s principal characters, are paranormal investigators with a Sam Spade vibe. They join the main character early in the game and help along in the plot.

DeYoung opened up a plain-looking laptop and showed me the game’s opening. Players, who can customize their characters using Penny Arcade-themed features, begin the game in a very Hitchhiker’s Guide to the Galaxy way: sitting in their house, which gets trampled by a giant, Cthulhu-inspired Fruit Fucker 2000. DeYoung told me Mike “Gabe” Krahulik worked closely with the team to ensure the game stayed close to its aesthetic roots, and it shows. Everything looks like a 3-D version of the comic would, brightly colored with its trademark severe curves and close-ups.

As the camera pans around your neighborhood, the narrator chimes in, all Lovecraftian doom and gloom, and very much in Jerry “Tycho” Holkins’ logophilic style. The narrator sounds like the guy who did the opening to the Conan movie, and he sets the game’s humorous yet horrific tone perfectly.

I asked Gilbert if working so closely with guys who weren’t veteran game developers was more difficult than creating a game would normally be. “I don’t know that it really was,” he said. “Mike and Jerry are both very creative people. After a half hour of explaining to them how an adventure game was structured, they just got it. … It was just a lot of really great brainstorming after that.”

“In terms of education, I think the biggest learning curve for them was how much iteration a game goes through,” DeYoung said, “how it looks half-way through. But we were all really happy.” 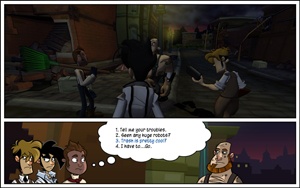 DeYoung then loaded the game into a different scene, a downtown, dockside location called Hobo Alley. Naturally, one of the businessmen in the area wants your help ridding the area of hobos, and this is where the game abandons its purely adventure game classification.

Rather than scripted battles, you engage enemies in a classic J-RPG style. Characters’ actions refresh according to an onscreen timer bar, and in Super Mario RPG fashion every attack and defensive move can be accented by hitting a button at the right time. So, for instance, when Tycho unloads his Tommy gun on an enemy, if you hit the spacebar at the right moment, he does more damage.

I asked DeYoung how they came to the decision to incorporate combat into an adventure game. “A lot of us have a soft spot in our heart for adventure games,” he said, “and we really want to play a part in bringing that back. But for the modern gamer we think we need some extra assets in there. RPGs are something Penny Arcade fans really like, so we thought it’d be a great combination.”

RSPD wasn’t the only adventure game I saw at GDC – Nokia is working on a hand-held game called Dirk Dagger and the Fallen Idol, and Telltale was rocking Sam & Max outside the press room. I asked if the genre was making a comeback.

“There’s been a little bit of a resurgence,” Gilbert said. “Telltale is doing very classic adventure games. But it seems like what’s happening is people are taking the really good things about adventure games and starting to integrate them into other games. It’s really very exciting. From a storytelling standpoint, adventure games were a really good way to tell a story because it really does weave the story into the actual game.”

And other than the combat, the game does stick closely to its adventure game roots. Gilbert referred a lot to Monkey Island when he explained RSPD‘s dialogue trees, saying the whole experience gets strengthened by Holkins’ writing and Krahulik’s art direction and storyboarding, which Hothead doesn’t plan on neutering for a rating. As of now, they anticipate the game will be rated M and don’t plan on needing to tone anything down.

DeYoung says the game lasts about 10 hours on average, six on the short end, and he plans on releasing the game episodically, hoping to be able to produce an episode once every four months. As of right now, DeYoung says most of the work on episode two is done. They wouldn’t say how many episodes they plan on having, but they’re adhering to the serial drama model, where each episode can stand alone but contributes to an overarching story.

Penny Arcade Adventures: On the Rain-Slick Precipice of Darkness will be available for under $20 on Windows, OS X, Linux and Xbox Live Arcade.

Age of Conan Editorial: The Rules of Engagement