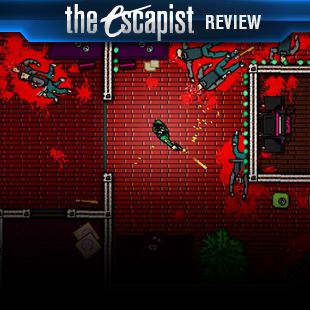 If you were to ask me to briefly sum up the problems with Hotline Miami 2: Wrong Number, I’d go with the word “more.” The original game, in many ways, was a success built on simplicity. Explaining the core of its experience to someone was as easy as saying “it’s an action game about a deranged guy going to war with the mob while wearing rubber masks.” Everything about Wrong Number, meanwhile reeks of Dennaton Games looking at the first title’s formula and trying to up the ante. It has more story, more action, more gameplay and more complexity. All of which adds up to an experience that’s far less satisfying than its 2012 predecessor.

Set in 1985, 1991 and 1994, the story focuses on the events leading up to and following the mass murders of the first game. Unlike Hotline Miami however, which only included two playable characters (one in non-canon bonus missions), Wrong Number tells its story by jumping between the perspective of more than a dozen people, each of whom brings their own unique perspective to the table.

While I can admire the ambition it takes to expand on the original in such a large way, the story is almost as jumbled as it complex. Several characters leave next to no impression and those that do manage to be interesting often have their stories muddled by the honestly unnecessary convolution of the game’s plot. It’s unfortunate because there are several threads that, on their own, could have been fodder for a more concise and comprehensible story. As it stands however, it feels like the writing spends too much time straining to feel weird and unhinged when a more straightforward exploration of some of its characters and themes could have been fine fodder for a more interesting and comprehensible plot.

The narrative’s drive toward complexity also yields some unfortunate moments of distracting excess. A controversial scene of suggested rape, for instance, brings next to nothing to the story save for some shock value and pixelated pair of butt cheeks. It honestly could have been removed or altered and the story overall would have been identical. There’s also an early stage where you play as a journalist who, after beating his way through a building full of Russian mobsters, calmly interviews someone at gun point and is then allowed to walk peacefully away as though he didn’t just assault a dozen or so heavily armed men. It stood out to me as being incredibly silly and out of place.


Thankfully, at least, the game is still fun to play, for the most part. In fact, if you enjoyed Hotline Miami and just want more gameplay content in its style, then Wrong Number should leave you fairly satisfied. The combat, in case you were worried, is essentially identical. You enter a building filled with enemies and need to kill them all with whatever melee weapons or guns you find. Gunfire will draw them to you however and one hit is all it takes to bring you down. It’s just as fast-paced, bloody and brutal as you remember.

As entertaining as it can be in its best moments however, there are times when the developer’s attempts to expand on the original’s formula cause more trouble than they’re worth. The mask system from the first game returns, but with some changes. Whereas in the first game, you could select different masks to take advantage of different gameplay buffs (faster walking, start with a knife, killer doors, etc.), the masks in Wrong Number put you in control of entirely different characters. This actually seemed pretty nifty to me initially. 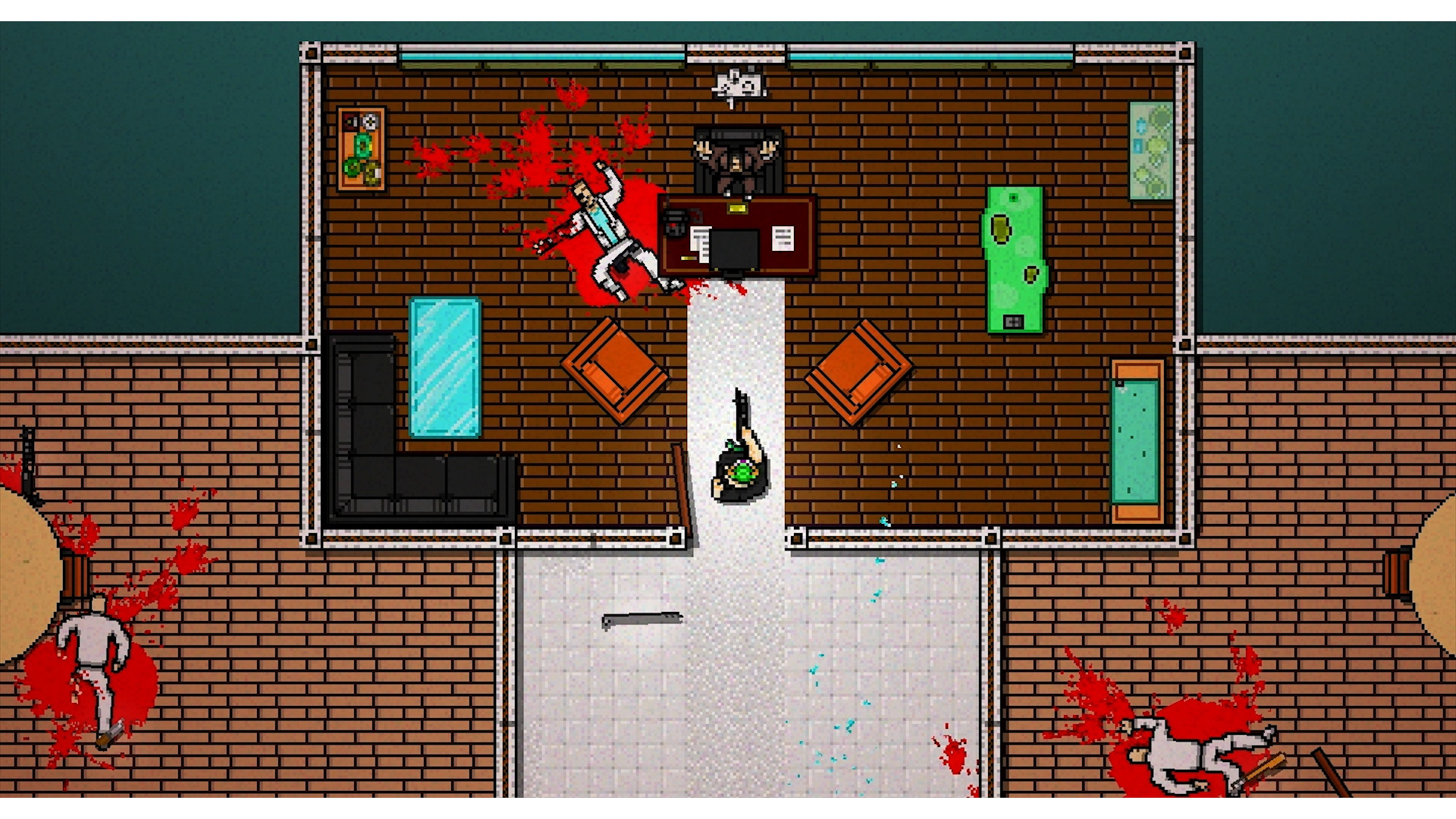 Each of the protagonists in question comes with their own unique set of equipment and skills that change how you play. The thing is, as I experimented with each character I quickly began to notice that many actually felt more restrictive than useful. Others, meanwhile, are somewhat broken. One mask actually puts you in control of two characters, one with a chainsaw and another with guns. I was super excited to try them out but only wound up being disappointed after I discovered that the gun character trails so far behind the chainsaw wielder that their bullets tended to miss or get caught on corners. Other mask-less characters come with similarly frustrating problems that just break all logic. Why wouldn’t you swap guns or pick up ammo when you’re in a building full of enemies? Because the game says you can only use one gun, that’s why.

A far greater problem than that however, are some of the subtle shifts made to the game’s difficulty. Hotline Miami was hard but it was also fair. Its levels were split into small sections so that dying, at most, probably cost you a few seconds of gameplay time. Failure was just part of a learning experience; you exploring your surroundings, probing your enemies and looking for the best way to slaughter your foes. Levels in Wrong Number are still split up, but the sections feel much larger and more cruelly designed. There was one stage about halfway through the game where I spent a solid 45 minutes trying to get past one difficult room. The problem came from it being situated at the very beginning of the stage. So even if I managed to get past it I’d then have to fight my through an entire floor full of enemies. If I died I’d be back at square one having struggle through the obstacle all over again. I wouldn’t be hard-pressed to think of several similar spots that pushed the difficulty far past the realm of fun and square into frustration.

The game does make up for it in other ways. The visuals remain a feast for the eyes if you’re a fan of retro-style pixel art. The soundtrack is also just absolutely fantastic. Filled to the brim with energetic synth, the music in Wrong Number isn’t just background noise, it’s an outright force. There were moments when I’d be worn down from frustration only to have some new track come on and immediately get my blood pumping and ready for more. The music, on its own, does more to craft a mood and atmosphere than anything else in the game. Even if you skip Hotline Miami 2, you need to pick the soundtrack.


Hotline Miami 2: Wrong Number isn’t a bad game. There’s a lot of fun to be had in the space between it opening scene and ending credits. That said, it’s also nowhere near being the equal of its predecessor. I admire Dennaton Games for trying to build something bigger out of the wonderful, small title that caught gamers by surprise three years ago. I’m feeling though, like they learned the wrong lessons from that first game and hope that if there’s a Hotline Miami 3 that they’ll scale back on “improvements” and instead focus on recreating the unique and contained experience that they delivered with the original.

Bottom Line: Not as good as the original, Hotline Miami 2 delivers a flawed dose of the high speed ultra violence that’s fun but not essential.

Recommendation: Pick it up if you loved the first game. Otherwise you might be better off just listening to the soundtrack.