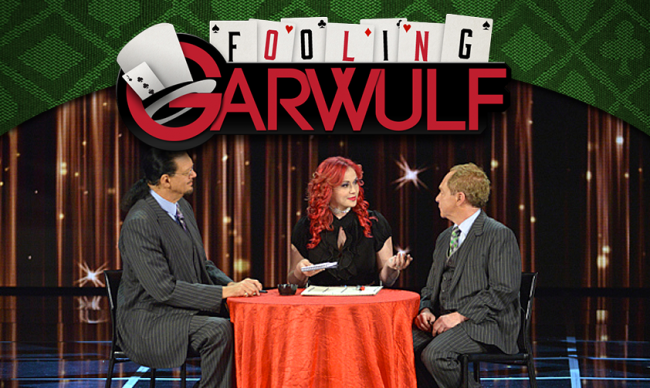 Editor’s note: come for the episode recap; stay for the wonderful insight into the world of magic (starting on page 2!)

It’s another week, and another good, solid episode of Penn & Teller: Fool Us. So, without further ado, the performances:

Austin Janik: My favourite moments from the first season of Fool Us were, without exception, the ones involving young magicians. There’s something very special about seeing a talented teenager or kid stand in front of his/her heroes, perform, and be told they’re doing well. Janik may not have fooled Penn & Teller, but he got to live the dream and have two of his inspirations tell him that it’s not one he has to wake up from – and that is a magical moment.

The Amazing Allison: This was a wonderful mentalism act with a lot of “va-voom,” as Misty Lee would say. It uses a very well done redemption and escalation plot – when Allison first reveals the number prediction, it looks like she’s failed, but then she reveals that not only has she succeeded, she’s done so in an even more impossible manner. If I have one criticism of her performance, it’s that she probably did the revelations in the wrong order. The number revelation is so spectacular that it overshadows the picture revelation, almost turning it into an anti-climax. She put on a great show all the same, even if she didn’t fool Penn and Teller, and her schtick with Teller was incredibly entertaining.

Mac King: I think this one has to be the best performance of the night. It wasn’t sublime, but it was pitch-perfect comedy magic, which is actually really hard to do. The production of an animal during a variant of the cups and balls also harkens back to the Gali-Gali men of Egypt, who perform the trick with live chicks (https://www.youtube.com/watch?v=a45_NFT6x1M). It didn’t fool Penn and Teller, but it was a blast to watch, and the guinea pig stole the show in the best way possible.

Norman Ng: This was a wonderful performance and a great take on cutlery bending. On an intellectual level, magic should challenge and explore the nature of reality, and by having the bending of the real fork cause the drawing of that fork to bend as well, this trick established an impossible connection between the two. It’s a good presentation and quite wonderful, even if it too failed to fool Penn and Teller.

Penn and Teller: What they performed wasn’t magic, although it was a trick, and a very entertaining one. I’d almost describe it as a good-natured prank on an audience volunteer. Still, it’s a performance with a lot going on under the surface – the experience of the volunteer on stage is very different from that of the audience, and as such it mirrors every magic trick ever performed, where what the magician sees is very different from what the audience sees.

And this brings me to one of the remarkable things about Fool Us – it manages to bridge the gap between performing for lay audiences and magicians. This is not an easy thing to do.

Put simply, once initiated in the art of magic, one begins to look at tricks in a new way. Magicians generally know how the trick is created – their attention shifts to the intricacies of the method. For a successful trick in front of a lay audience, however, what matters most is the effect, along with its proper framing through patter. As a result, the things that would most impress a magician might not even register with lay audiences, while effects that would barely impress a magician can leave a lay person’s jaw on the floor.

The first was Harry Houdini (1874-1926), who had made his name as an escape artist, but wanted above all other things to be recognized as a great magician. Houdini’s problem was that he wasn’t a great magician, or even a good one – while he possessed the technical knowledge of how to perform the methods to the tricks, he lacked the finesse to make them work in front of an audience. This did not stop Houdini from trying everything he could to make a name for himself. Having started his career in part by doing card manipulations – he had once billed himself as “The King of Cards” – he claimed that he could determine the method of any card trick that was shown to him three times in a row. Magicians were quick to take him up on this challenge, only to find that Houdini was good to his word, and could not be fooled. He may not have been a good performer of magic, but he was a knowledgeable one. 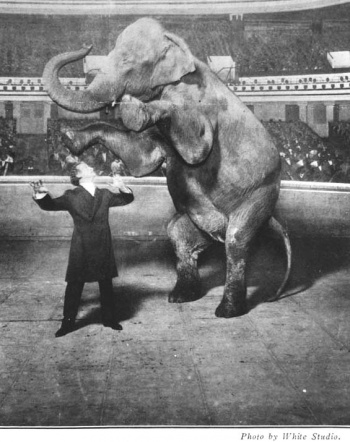 Perhaps the best example of Houdini’s problem was the very trick that finally secured his name in the annals of magic – disappearing an elephant. By all accounts, the method and the illusion were both brilliant: the elephant and its handler would move into a box, and the box would then be revealed to be empty, the elephant and handler vanished into thin air. No magician in their right mind, however, would have performed that particular trick at the Hippodrome in New York, a massive theatre that could seat over 5,000 people… which is precisely what Houdini did on January 7, 1918. As a result, while the press and the tiny minority of the audience who were seated directly in front of the box got to see an amazing illusion, everybody else watched an elephant walk into a box, Houdini declare that the elephant had disappeared, and then waited as the box was taken off-stage. The press reported nation-wide that Houdini had made an elephant disappear, securing his name as a great magician, while audiences were disappointed by it every night for the entire four month run of the show.

The second was a Canadian named Dai Vernon (1894-1992), born David Verner. Vernon was not only a great magician, he was a revolutionary one. At an early age, he bought and memorized The Expert at the Card Table, now revered as one of the most important books in card handling, and realized that – unlike the magical style of the time – it was better for a magician to appear to have done nothing out of the ordinary, as opposed to drawing attention to sleights with artificial flourishes. He had a hunger for knowledge, and would seek out any con artist or card cheat who could teach him something new. He would later be known as “the Professor,” and much of how close-up magic as we know it today is performed was either invented or re-invented by him. 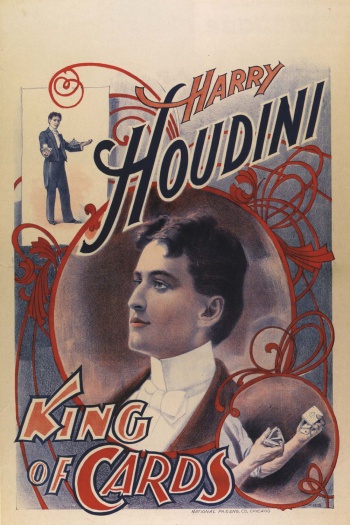 However, in 1922 all of this prestige was in Vernon’s future – he was still a young man recently released from the Royal Canadian Air Force, struggling to make a name for himself as a magician while he earned a living as a silhouette artist on Coney Island. It was only a matter of time before these two men would come into contact, and on February 6, 1922, at a Society of American Magicians meeting at the Great Northern Hotel in Chicago, the young Vernon challenged Houdini.

There are varying accounts of the exact presentation, but Vernon’s own account was as follows: first, he had Houdini choose and initial a card from a deck. Then, Vernon placed the initialled card second from the top, and turned the top card over to reveal that the two cards had swapped places, passing Houdini’s card back to him to verify that it really was his selected card.

To a lay person, the trick is uninspiring. In fact, it is the least exciting possible variation of a trick called “The Ambitious Card,” where a selected card keeps travelling from various places in the deck back to the top spot. But to a magician, this was earth-shattering – Houdini knew the sleights involved in making the trick work, he had spotted them, and it should have been impossible for Vernon to hand the card over for inspection. After the third repetition, Houdini demanded to see the trick again. After the seventh, Houdini’s wife forced him to admit that he had been fooled. Vernon had successfully used Houdini’s own knowledge of sleight of hand against him, and afterwards advertised himself as “The man who fooled Houdini.”

In many ways, this confrontation is re-enacted over and over again in every episode of Fool Us, with one major difference: Penn and Teller want to be fooled. Houdini, on the other hand, was trying to prove that he could not be – he never forgave Vernon for fooling him and held a grudge against the Canadian for the rest of his life. Vernon was not destined to become famous outside of magical circles – while he was a brilliant magician, he disliked performing for lay audiences, and preferred to research and develop new techniques while working with other magicians. As a result, while to this day the public adores Harry Houdini, the man magicians revere is Dai Vernon.

Most performance theory in magic recognizes this basic difference between magicians and lay audiences. Most – if not all – books on the subject suggest that one should default to a style aimed towards lay people, and pay attention to the comments of spectators for fine-tuning the act. Magicians are generally considered the worst possible audience for fine-tuning a performance before it goes on stage, for the simple reason that they will pick up on the wrong things. To avoid having a distorted view of what does and does not work in an act, one must go to those for whom the act is performed.

And this is where Fool Us gets it right and captures lightning in a bottle – the magicians may be trying to fool Penn and Teller, but they are doing it while performing for the audience. As a result, the gap between magicians and lay people is bridged, and everybody watching gets the best of both worlds.

Robert B. Marks is the author of the new and revived Garwulf’s Corner on The Escapist, as well as Diablo: Demonsbane, The EverQuest Companion, the original Garwulf’s Corner, and the co-author of A Funny Thing Happened on the Way to the Agora. His current fiction project is The Eternity Quartet, with Ed Greenwood. His Livejournal can be found here, his Patreon-based magazine experiment, Garwulf Speaks, can be found here, and he is now on Facebook. He can be reached by email at garwulf at escapistmag.com.