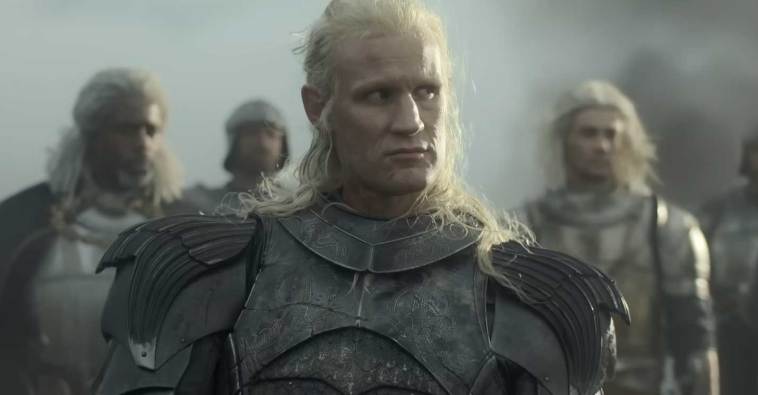 This discussion and review contains spoilers for House of the Dragon episode 3, “Second of His Name,” on HBO.

In some ways, House of the Dragon feels like an attempt to revisit the first season of Game of Thrones.

Obviously, the first season of Game of Thrones was a massive success. It provided a solid foundation for the series that would follow, catching the public’s attention and demonstrating the potential of a mass-market fantasy adaptation as a weekly television show. Even rewatched today, the first season of Game of Thrones feels like a bold statement of purpose, something remarkably different from anything on television around it.

It was also different from the seasons that would follow. Game of Thrones would eventually become a cultural phenomenon. Its budget would balloon in its later years, with the final season reportedly budgeted at $15M per episode, almost twice the $6M per episode reported between the third and fourth and the fourth and fifth seasons. While the infamously aborted pilot reportedly cost $10M, it seems safe to assume the first season’s per-episode budget was comparatively lower.

A couple of years ago, director Alan Taylor looked back on an iconic scene from the first season’s penultimate episode, “Baelor,” in which Ned Stark (Sean Bean) is executed. “It’s funny seeing how small and rinky dink the scene is because Game of Thrones has gone on to become very well-funded by HBO,” he told Vanity Fair. “But at this stage in season one, no one had seen the show yet, we didn’t know if it had an audience yet, and we didn’t have a dime.”

These limitations are obvious when watching the first season, where the production team is very aware of what it can and cannot afford to show. Also in “Baelor,” Tyrion Lannister (Peter Dinklage) is conveniently knocked out right before the Battle of the Green Fork, thus saving the show the expense of depicting the combat on screen. Daenerys’ (Emilia Clarke) dragon eggs only hatch at the very end of the season finale, “Fire and Blood.”

Given that House of the Dragon is following Game of Thrones, it does not have the same limitations. The first season reportedly has a budget upward of $20M per episode. While that is appreciably lower than the reported $30M-per-episode budget of Stranger Things, it is still a sizable chunk of change. As such, there is very little that House of the Dragon can’t afford to show on screen. Not for nothing did “The Heirs of the Dragon” follow its title card with dragons swooping over King’s Landing.

One interesting consequence of this is that House of the Dragon can occasionally feel like a redrafting of the first season of Game of Thrones, borrowing a number of set pieces and ideas that can be more effectively realized at this higher budget level. This was evident even in the presentation of the tourney in “The Heirs of the Dragon,” compared to the tournament scenes in Game of Thrones episodes like “Cripples, Bastards, and Broken Things” and “The Wolf and the Lion.”

“Second of His Name” revisits another key set piece from the first season of Game of Thrones that was kept largely off-screen, likely largely for reasons of budget. In “A Golden Crown,” King Robert Baratheon (Mark Addy) goes on a hunting trip. In the next episode, “You Win or You Die,” it is revealed that Robert was mauled by a boar. His wounds prove fatal, causing a succession crisis that eventually plunges the realm into chaos. Suffice to say that the depiction of these events is somewhat limited.

Author George R.R. Martin has been candid about his frustration with how Game of Thrones had to handle this sequence, which was pivotal to the show’s larger story. ″Where we really fell down in terms of budget was my least favorite scene in the entire show, in all eight seasons: King Robert goes hunting,″ Martin told Entertainment Weekly. ″In the books, Robert goes off hunting, we get word he was gored by a boar, and they bring him back and he dies. So I never did [a hunting scene].”

With this in mind, it feels rather pointed that House of the Dragon, on which Martin is credited as co-creator, should build “Second of His Name” around the pomp and ceremony of King Viserys’ (Paddy Considine) royal hunt. There are direct callbacks to Robert’s ill-fated hunt, when Rhaenyra (Milly Alcock) is attacked by a computer-generated boar, something that the first season of Game of Thrones could never afford. It feels like a deliberate restaging of a lost Game of Thrones set piece.

There is something blackly comic in “Second of His Name,” which is built around the idea of King Viserys’ impotence. Both “The Heirs of the Dragon” and “The Rogue Prince” placed an emphasis on Viserys as a somewhat passive leader, reluctant to take decisive action, instead favoring deliberation and consideration. After all, much of “Second of His Name” is built around Viserys’ understandable reluctance to commit the realm to a potentially costly and long-term war in the Stepstones.

Even when Viserys goes hunting, all the work is done by other people. “The huntsman has the trail, Your Grace, and has sent out the hounds,” reports Ser Otto Hightower (Rhys Ifans), as Viserys sits on his throne. “It won’t be long now until the White Hart is cornered. Your prize is in reach.” By the time that Viserys lays eyes on his prize, it has already been trapped and tied down by his servants. Viserys has done none of the work himself.

The spear with which Viserys will kill the beast is provided by Lord Jason Lannister (Jefferson Hall). He is instructed where to stab the beast by his huntsman, “Right here, Your Grace.” Even then, Viserys cannot put the stag out of its misery on his first try, “One more time, Your Grace. But a bit to your left.” It’s a strangely sad and pathetic image, one that underscores the idea of Viserys as a particularly ineffective and indecisive leader, more a tool of the statecraft happening around him.

“Second of His Name” is built around an effective metaphor that underscores one of the larger themes of Game of Thrones. Many of the “best” kings and queens, as much as they exist, are defined by their impotence, their willingness to let the act of governing happen around them. Viserys isn’t a tyrant who makes impulsive and unilateral decisions like his descendants Aerys (David Rintoul) or Daenerys will. Instead he surrounds himself with largely capable people and gives them space to work.

This isn’t particularly satisfying, for Viserys or for the audience. “I came here to hunt, not to be suffocated by all this fucking politicking,” he complains, and it seems likely that some of the audience will empathize. After all, the viewer is eager to get to the “cool dragon stuff” promised by the show’s premise. It’s an interesting tension. Is Viserys a good king or an impotent one? Or is he a good king because he is an impotent one? He seems to be a better ruler than any of the characters on Game of Thrones.

“Second of His Name” explores this tension as it relates to Viserys’ potential heirs. Another tension running through the show is the institutional sexism that Rhaenyra faces on her ascent to the throne compared to the privilege she enjoys as heir beside other women like Alicent (Emily Carey). As Rhaenyra understandably complains about her circumstances, Ser Criston Cole (Fabien Frankel) advises her, “Many in the realm would gladly trade position with you, princess.” He’s not wrong.

Similarly, Viserys’ inaction during the hunt is directly contrasted with his brother Daemon’s (Matt Smith) confrontation with the Crabfeeder (Daniel Scott-Smith) at the episode’s climax. While “Second of His Name” makes much of Viserys’ passivity, Daemon is presented as a one-man army. He holds his own against an armed force for an extended period of time. Even when his reinforcements arrive, Daemon single-handedly slays the Crabfeeder and decisively ends this phase of the war in the Stepstones.

This is an unusual scene because it feels like a much more traditional sort of high fantasy than Game of Thrones would usually portray, even in episodes like “Battle of the Bastards” or “The Long Night.” Pre-release reviews understandably compared the Crabfeeder to the Night King (Vladimir Furdik) from Game of Thrones, and Daemon’s confrontation with him seems intended for the fans who wanted to see a more traditional fantasy hero like Jon Snow (Kit Harington) vanquish the Night King. It is a weirdly conventional narrative beat.

“Second of His Name” is only the third episode of House of the Dragon, but there is a strange sense in how the show is positioning the succession struggle around Rhaenyra and Daemon that House of the Dragon might be a much more conventional and much less subversive fantasy epic than Game of Thrones. Three episodes in, House of the Dragon seems more interested in indulging in the broad crowd-pleasing clichés of the genre rather than deconstructing them.