Video game development represents an expensive gambit, especially for the major players who sink countless millions of dollars and thousands of hours of manpower into creating the sprawling AAA titles this industry is enamored with. And budgets are only getting more inflated, and development schedules getting longer, as games become increasingly complex and the platforms that host them increasingly capable. If you have any doubts about the high barrier to entry into AAA development, just consider the reported half a billion dollars rolled into developing vanilla Destiny, or the ten plus years Square invested in creating what we now know as Final Fantasy XV. 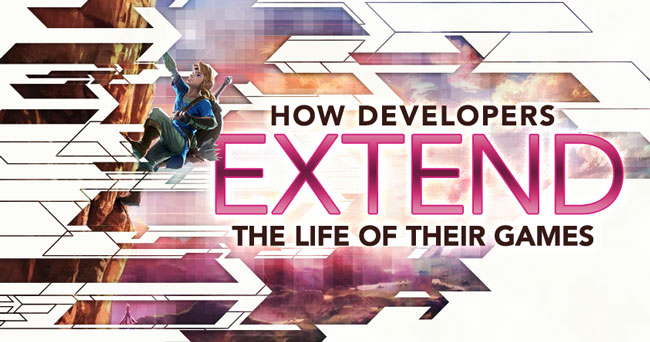 For developers and publishers, the desirability of eking as much profit out of engines and assets they’ve already created is pretty obvious. Iterating on and building content for games you’ve already released is much cheaper than rolling out brand new IP or even full scale sequels. And for gamers, continuing to play the games we love is also very appealing.

Beyond the sentimental aspect of wanting to preserve and continue to build on our memories with our characters, there’s the simple desire inherent in most human pursuits to feel like what we’re doing with our time has some purpose. I’ll sometimes catch myself thinking as I play through a single player experience, a game with a defined end that feels finite and complete, “Why am I doing this, when it’ll all be over in a few hours?” Of course, enjoying playing a game and the moment to moment gameplay is a reward itself (arguably the whole point of any entertainment in the first place), but there’s something powerful about the sense that you’re investing your time in a living, growing world, an experience that doesn’t have any predefined end point.

Obviously, the strategy for extending the life of a game will vary radically by title. A game like the aforementioned Final Fantasy XV will need to focus on narrative, on telling new stories in its sprawling world, and events that focus around and are driven by the memorable characters at the core of that franchise. Single player content that concentrates on the four primary heroes, both in terms of narrative and progression, will be most important. It’s clear Square is already executing on this strategy, raising the level cap for Noctis and his companions, and announcing upcoming story packs that will drill down into each character’s backstory.

On the opposite end of the spectrum, games like The Division and Overwatch will need to focus less on story and more on their multiplayer appeal, both competitive and cooperative. The Division is a game that gets closer to a true MMO experience with every patch and expansion, and releases like the survival mode introduced back in November and additional raids and challenging group content continue to push it in this direction. Unlike Final Fantasy XV, it was never a game intended to be played alone, and ensuring it stays relevant will mean continuing to explore directions that enhance the experience of playing together with (or against) your friends and the rest of its bloodthirsty community. It’s important, however, that this new content not only be fun to play, and introduce new and fresh wrinkles to the fairly well trod gameplay, but also that it continue to reward players. Playing with others is fun, but that play needs to be rewarded with interesting ways to continue distinguishing your own character and making him or her feel more capable (and look increasingly dangerous).

No game is built in a vacuum, and success is incredibly difficult without some measure of real innovation.

Destiny, on the other hand, falls somewhere between these two poles. Its story has always been of dubious importance (and quality) but it’s something Bungie has continued to emphasize and improve, and it’s one of the keys that will keep players interested in the purportedly decade long Destiny experience. Destiny, and any of the sequels that follow, will need to continue to build and flesh out a more coherent and engaging story, and motivate players by immersing them in interesting fiction, and the idea of a living (and perhaps changeable) game world. But Destiny can’t just lean heavily into narrative the way Final Fantasy can; regardless of how you feel about the story of the Darkness and the Traveller, Destiny is a game whose core is its snappy, best-in-class gameplay. That gameplay also feeds beautifully into Destiny‘s variable-reward-schedule loot machine, so the team at Bungie will need to continue to build gear that feels suitably amazing according to the effort players invest in getting it. And, like The Division, they’ll also need to continue to provide new and interesting ways to interact with other players, be it in new cooperative modes and styles of gameplay, or in its Crucible, which has over the past few years has provided some of the most unique takes on online first person shooting anywhere.

Then there are newer titles just stepping foot into this already crowded space, games that also have a lot invested in continuing to be relevant across the coming months (or years). If a game like Guerilla’s Horizon: Zero Dawn wants to keep pace with some of these other titles, it will need to find wholly different ways to tell stories in its unique primitive-futuristic universe. And The Legend of Zelda: Breath of the Wild, which recently announced a season pass, will have to find wholly different ways to lure players back to its massive world once they’ve defeated Calamity Ganon and brought peace to Hyrule.

One of the most successful ways that games have managed to ensure a long life after launch (and to, sneakily, shift some of the onus for creating new content from developers’ shoulders and onto the players’) has been through robust support for modding and user-created content. Skyrim is a perfect example of this, a game released in 2011 that, even before the HD version was released late last year continued to be one of the most streamed games on Twitch, and which still has an active community of modders tweaking it and adding thousands of hours of new content. Even simpler than developers building content with pre-made assets is letting your fans build it themselves, and creating the necessary tools will always be cheaper than creating a continuous stream of new premium content. Give a player an add-on, and they’ll play for a week. Teach a player to mod, and you’ll enrich them for life.

In a similar vein, wringing more content from your game via a rich, genuinely interesting New Game Plus mode is an excellent way to ensure your players have a reason to keep going back to your game without necessitating the tremendous amount of work required to, say, build a full sequel. But it’s critical that these modes offer real hooks to keep players invested. There’s a way to do New Game Plus properly, where you retain players progression and offer new rewards, enemies, and experiences not available in the base game (Borderlands and Diablo are two franchises that excel at this); and there’s a way to do it poorly, where it’s essentially a restart, the same game with few differences, and where the only carry over is a handful of items or end game rewards (we’re looking at you, Resident Evil 7).

The real success stories, games that not only reap massive profits for their creators but that also endure in the minds of players as impressive and worthwhile experiences, will always be the ones that pull some of the best ideas I’ve laid out here and blend them with their own, unique ways of putting off their game’s expiration dates. No game is built in a vacuum, and success is incredibly difficult without some measure of real innovation. But games that do manage to catch lightning in a bottle and create a meaningful legacy bring not only financial reward but build a pedigree, establish an affection in the minds of players for the people responsible for their favorite stories and settings. That sort of loyalty is more important than any single purchase, and it’s built inside games that stand the test of time. Just ask any World of Warcraft player who will spend their life chasing the high they experienced the first time “/played” returned “30 days.”