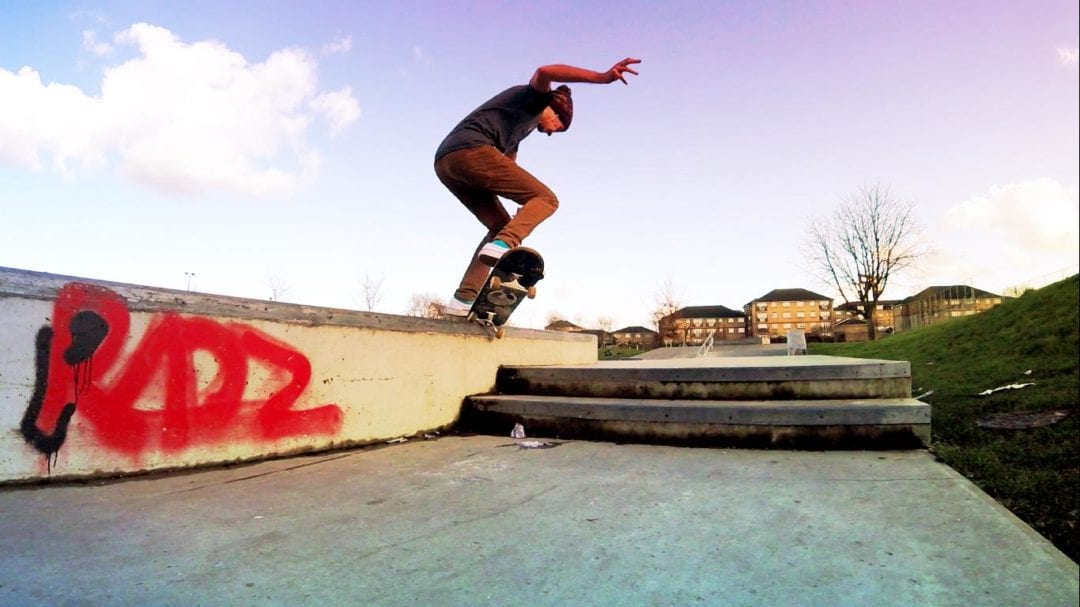 When Roll7 released OlliOlli back in 2014, I don’t think any of us really knew what we were in for. The game didn’t take a long time to make — not because it was easy, but simply because we had a limited amount of money and had to finish it in a short time frame. Those nine months of game development was our first “real” project for a “real” publisher. It was fraught with arguments, late nights, dilemmas and cut features.

We were all proud of what we had made, but I don’t think we realized how much it would resonate with players, or how it would continue to entertain (frustrate and enrage) players for years to come.

This year is Roll7’s 10th anniversary and January 2019 will be the fifth anniversary of OlliOlli. In that time, we’ve ported the game to over 14 different platforms — with more still in the works. OlliOlli is now everywhere from the Xbox One and PlayStation 4 to the Nintendo 3DS, Amazon Fire TV, and Nvidia Shield. If it’s got an analogue stick and a button, you can probably get OlliOlli on it.

So what is it about skateboarding that appeals to so many people? Why is it a good basis for a video game?

Skateboarding is something close to our hearts as a studio. I’ve been a skateboarder for 27 years, and still go out rolling at least a couple times a week when the weather and my rickety old knees will allow me. It’s not a sport that you need to be good at to have a good time. It’s social and creative and funny, and there’s always a chance that you’re going to slam really hard on your hip and have to hobble around for a week.

Now, I totally understand that the skateboard purists out there would say that OlliOlli is super far from real skateboarding. I mean, no one in real life is doing 127 trick combos down 15 hand rails while pulling 540s. That’s just not possible. If you want something close to real skateboarding, you’re better off playing Skate or Tony Hawk’s Pro Skater. But I’d say no game, ours included, captures all of what it means to be a skater.

Skateboarding is a hugely diverse activity. There’s so many different ways that you can ride a skateboard — whether that’s the incredible stuntman style riding of Aaron Jaws Homoki, or the hyper technical wizardry of Jason Park, or the downright just weird riding of Orange Man and the other members of Fancy Lad Skateboard Company. No video game captures everything of what it is to be a skater. Not even Skate 3 or Tony Hawk offer you the full breadth of creativity that getting on an actual board will offer you.

With OlliOlli, our approach was a little different. Playing the game is nothing like riding a real board, but at its core we try to emulate two of the feelings that make skateboarding satisfying in real life. The first is finally doing something that you’ve been struggling at for hours, the satisfaction of finally nailing that thing you just couldn’t do before. The second is the realization that no matter how hard or cool the thing you just did was, there is always room for improvement.

We’ve captured those feelings from our own experiences as skateboarders. None of us are amazing on a board, so learning even something straightforward can take a really long time. I can think of multiple tricks I’ve wanted to learn that took me hours of repeated practice to get during long sessions at a park trying the same thing over and over and failing before just going home unsatisfied. What’s funny about skating, though, is that as soon as you finally get that trick after three hours of trying, you immediately want to improve it. Do it cleaner, pop it higher, roll away from it a little steezier. That’s what we wanted to harness — that weird combination of rage, frustration, and perseverance that, when it pays off, you immediately want to do something even more difficult.

OlliOlli is designed to be a huge challenge. In real skateboarding, just rolling along and doing an ollie is difficult. It takes most people months to learn how to simply jump a skateboard up a curb. In OlliOlli just getting the initial timing down to allow you to jump through a level will take practice and coordination, and like real skateboarding, it’ll likely be fraught with frustration along the way. But once you’ve got that timing down, you can start to flow through the levels and feel like a boss.

From there it’s all about mastering the stuff you think is cool, whether that’s spins, flips, or grinds. After a few hours, that crazy hard level you used to scream at will be a breeze. It’ll become something you play late at night just to chill out and flow around.

I hope that what sets this game apart from other skateboarding games is that instead of trying to simulate actual boarding, it taps into what makes the act so satisfying — coordination, perseverance and patience  — and giving you a sense of mastery and skill when you return to the easier stuff you struggled with before.

Now where do we go? We’re still super excited about doing more OlliOlli, and the messages, tweets and emails from fans asking for more certainly don’t fall on deaf ears. There’s a long list of features and additions that we’d love to make to the game — adding more competitive modes, more customization, more social features, and ultimately including some accessibility features to make those early few hours with the game more manageable that would be not unlike adding skate trainers to your real board. At the same time, we’re also really wary of diluting the magic that the game currently has. Plenty of other skate titles have shot themselves in the foot by adding shopping cart races or plastic peripherals that detract from what made the core game fun. Pressing X to land is crazy frustrating, but it’s also a huge part of what makes the game satisfying when you do get it.

When we started OlliOlli in 2012, we knew we couldn’t compete with the Hawks and Skates of this world, but we set out to make the best  game we could. None of us realized that it would blow up like it did, and I’m thrilled that the sport that I love the most is also the core of the game that we make. There’s certainly plans to do a bigger, radder, gnarlier OlliOlli, but it will always be a small game — we’ll never make it open-world full 3D. I hope that people will continue to enjoy our take on arcade skateboarding, keep setting killer scores, and keep thrashing those thumbsticks.

And with that, I’ve got a radical new flippy trick to go and learn.