So now that I’m back from Escapist Expo – at least, I will be by the time this goes out but actually I’m writing this in my hotel room trying to focus through apocalyptic jet lag and wishing I hadn’t ordered breakfast for 8am – let’s follow up that DayZ video I did two weeks back. DayZ now joins Minecraft in the genre of almost totally emergent gameplay, a big world where your only motivation is exploration and your own survival. Which I find I like quite a lot. I love exploration as a game mechanic because in my ordinary life I like to keep to a familiar routine, and so in my escapism I want the opposite. Doubtless adventurous people like Sir Ranulph Fiennes and Brian Blessed prefer playing The Sims and forklift simulators.

But there are problems with the DayZ approach. It’s very engaging initially when you’re just gathering enough food, water, weaponry and supplies to survive the next five minutes, but then there’s what happens when you’ve got all that sorted out. You’ve made it out of the city alive, you’ve got a full canteen, enough tinned spam to feed Hawaii and one of the guns that isn’t so loud it draws zombies like repressed businessmen to Japanese bookstores, but what do you do then? Climb a tree and eke out a living among the sparrows?

Some semblance of an eventual goal would help. My thinking was that the server could randomly spawn some survivalist Xanadu somewhere, a huge fortress full of dirty magazines and maybe enough supplies to cater for about half the number of players on the server, then leave maps scattered around with the location marked. Then everyone could gradually make their way there, and once they arrive, further emergent storytelling arises when either the fortress needs clearing out of zombies or maybe bandits have taken over. But once you’re in it, the game turns into an eternal war of back-and-forth as you try to keep out the people you don’t like and keep in the people you do.

But maybe even that’s too much direction and DayZ should continue to embrace the Minecraft model by just adding more and more random stuff and letting the players come up with more and more emergent goals for themselves. I mentioned that I’ve gotten into playing Minecraft‘s hardcore mode when I’ve nothing better to do. I used to play on the standard mode, but after I’d dug a massive mine and constructed my lava-spewing skull fortress with in-house roller coaster and throne room I just sort of lost interest. If Minecraft can produce an infinite variety of worlds to explore then why feel confined to one? You can really start to appreciate your achievements in a Minecraft world if you know that taking your eye off the ball for long enough for that rustling sound to finish could take it all away from you in an instant.

And when I play Minecraft hardcore, there are a number of self-imposed goals I might give myself, focussing on one at a time or sometimes several at once, goals that Minecraft itself neither imposes upon you or stands in the way of. Let’s take a look at a few.

A Claustrophobe run basically messes with the game’s whole point by cutting out the mining. You must always have the sky above your head, and must get by from the minerals extruding naturally from mountains and the walls of ravines. This gives you one day to prepare enough weapons and armor to survive the monster-haunted Minecraft night without the ability to bury yourself underground and have a sleep. Once you’re reliably surviving the night, though, arbitrarily decide that your character has had some kind of brain-reversing stroke and must now immediately head underground and never return to the surface. At that point, monsters become secondary to hunger in terms of threat. You have to figure out how to grow wheat underground, unless you plan to stand in a cave entrance giving come-hither stares to passing pigs. The alternative name for this play style is the “Eloi/Morlock” run. 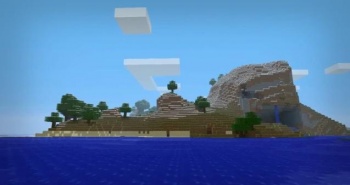 The objective of a Mr. Navigator run is to create a map and then fill the entire map by travelling to everywhere it covers. This isn’t as easy as it sounds, because to make a map you need to combine paper and a compass, and to make a compass you need redstone, which you need to mine pretty damn deeply to find. This playstyle therefore will have you build your supplies with a lightning-fast initial deep mining operation before packing up your pots and pans and going on an odyssey around the surface world. Unfortunately the appeal of Mr. Navigator is limited on console versions of Minecraft because they give you a map at the start, which is further evidence if it were needed that comparing Minecraft PC to Minecraft console is like comparing Switzerland to the Switzerland section of the It’s A Small Small World ride at Disneyland.

Top Tip: When mapping oceans, always carry a spare boat. The Minecraft man apparently learned how to make boats from a blind cornflake artisan with Parkinson’s disease and I’ve had boats disintegrate if I so much as sail into a lily pad too hard.

The Nether is a cavernous hell-like territory that can only be accessed by making a magic portal out of obsidian, so we start with another fairly massive operation to acquire enough diamond to make a pickaxe that can mine obsidian. Often my Mr. Navigator runs turn into Nethernaut runs if I survive long enough, because it’s easier to find the diamonds you need from temples or villagers than from mining it. Once I have the portal, I explore the Nether as far as I dare, often bringing piles of Nether minerals back into the normal world for construction purposes. Nether rock burns forever, for example, so it can make your house look really fucking metal. And Glowstone from the Nether is a source of light that isn’t affected by water, making it ideal for illuminating the construction of underwater biodome complexes.

Once I wanted to do a Gorillas In The Mist-style Nethernaut run by gathering enough supplies that I could disappear into the Nether forever and carve out a new life among the zombie pigmen. I spent days filling my pack with food and useful tools before finally stepping into my Nether portal, only to find that it had spawned me about a mile in the air above an ocean of molten lava.

I’ll say this for Minecraft‘s hardcore mode: it really helps you learn to be philosophical about life’s ups and downs. I think Kipling said it best: “If you can make one heap of all your winnings, and lose it because a Creeper found the entrance to your underwater biodome complex, then yours is the Earth and everything that’s in it, except not really.”