There are a lot of conventions in sequel naming that don’t seem to get questioned much, so perhaps it’s time we took a step back and re-assessed. I was a little bit thrown by the new Halo game being called Halo 4, because while it is in the same setting with the same main character, it’s a new story about a new struggle with a new villain, and I would think an incremental number would imply that the new game is a continuation of all that has come before. If nothing else it might alienate people who want to get into the series but assume they have to start from the first. It’s like that old problem of seeing an intriguing-looking fantasy epic in the book store and discovering that it’s book 7 of 15.

And once my thoughts turned in that direction it occurred to me that books don’t do the number thing. I can’t think of any examples of a book sequel that was just the name of the previous book with a number after it. To Kill A Mockingbird 2 does not exist. And the reason why books don’t do it is probably because it is, on reflection, really dumb. And rather creatively bankrupt for a creative industry. A number on the end is how one names a software update. Or a database file if you couldn’t fit all your data into the first database file and needed another one. No wonder creativity in the entertainment industry stagnates; the developers hear they’re working on Generic Shooter Plus Another One and all their imagination evaporates. This problem needs to be cut off at the source. I present my guide to better sequel naming.

Lesson 1: Strategic Use of the Word “Part”

The subtleties of the English language are really quite marvellous. Just the addition of a single word can add whole new layers of meaning. Merely taking the name of the first one and sticking on a 2 might look like you’re just stamping out another, identical one, like how you might give the name “Colin 2” to a clone of a bloke called Colin. But if, on the other hand, you used the name “Colin part 2″ then it sounds like you’re putting out the second instalment of some huge, immeasurable Colin. It implies a greater degree of forethought, like this is the continuation of a big story you’ve had all worked out from the start. In some cases, though, this will obviously be tripe, as in the case of, say, Friday the 13th Part 4. Give the audience some credit. No one seriously believes that they made Friday the 13th 1 with the understanding that Jason had three extra lives like fucking Pac-Man.

One popular alternative to numbering is to replace the number with a colon followed by a seemingly randomly chosen word. Particularly one that begins with the letters RE, such as The Matrix: Reloaded, or Assassin’s Creed: Revelations. Don’t kill yourself trying to think of the perfect word to use, though, because it hardly matters. Its only real purpose seems to be plausible deniability, for the event that someone accuses it of not being a “real” sequel. Of course it wasn’t a real sequel! What did you expect? It didn’t have a number in the name! Note Dead To Rights: Retribution, in which the approach is used to signal that the game is a divergent timeline to the original in which there’s much more swearing and testicles being bitten off.

One way to do one word subtitles that appears to be something of a lost art in modern entertainment is forgoing the colon and making the title a grammatically correct sentence. Such as in Batman Returns, or Herbie Rides Again. 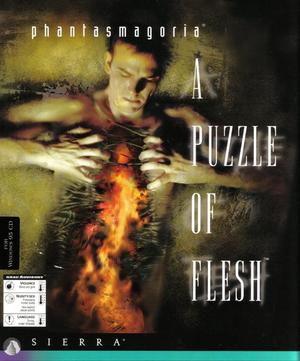 If you took the original title off one of the sequel names in the previous lesson you wouldn’t have a clue what the series was. “Revelations” alone could refer to about fifty thousand things. What you see kinda rarely these days in gaming is a sequel name where you can identify it just from the additional part. You’d know what I meant if I said LeChuck’s Revenge or A Puzzle Of Flesh, assuming you have a working knowledge of 90’s PC adventure games. In this case it is the original game’s title that’s being artificially bolted on with the colon, not the subtitle. By picking a subtitle that would also work perfectly well as a main title you are finally showing the necessary commitment to thoughtful storytelling and taking the franchise in significant directions. Well done, you.

Magnum Force, The Enforcer and Sudden Impact are sequels to Dirty Harry. They’re never referred to as Dirty Harry 2 or Dirty Harry: Resurrection. The same is true of James Bond films, which is just as well, because we’d be up to Dr. No Part 47 by now. It’s just a thought, but maybe you could give the audience enough credit to assume you don’t need to put a big fucking label on everything for the benefit of easily frightened thickos who only want to watch what they’re familiar with.

“Well, obviously they wouldn’t call the new James Bond film Dr. No Part 47, because Dr. No was only in the first one,” I hear you cry. Well, apparently that’s not so obvious a principle to the people who name Halo games, because Haloes are barely involved at this point. There’s one in Halo 4 but it only shows up at one brief moment in the background. It’s like how Stan Lee always has a cameo in Marvel films, if the films were all called Stan Lee followed by a number.

In other words, the practise of just naming the sequel after the first game, unchanged, like Prince of Persia or Sonic the Hedgehog. The usual intention being to imply that this is a big ol’ reboot and everything up to this point is officially stricken from the record. This is a really fucking stupid practice and if you do it you deserve to die. You’re just making it awkward to have conversations about the series. People are still going to need a way to indicate which of the two identically-named games they’re referring to, and they’ll usually do it by putting the year the game came out on the end, as with Sonic 2006.

On reflection, there’s a delicious irony in that. In your misguided attempts to avoid having to put a number on the end, your title ends up with a fucking massive number on the end with four whole digits. Ha! In your face. I’d love to play Sonic 2006 but unfortunately I never got around to playing the 2,005 previous installments.