If you dig deep enough, you can find roots of the Commander and EDH format going back to some of the earliest history of Magic. To make a long story short, the ball started rolling in the early 2000s, but it’s only in the last few years that it’s really picked up steam – all but becoming the de facto casual format for constructed Magic. Certainly getting officially supported by WotC with products has helped with that, but the format’s success pulls on a number of subtle strings.

It’s designed to be social and multiplayer with an emphasis on being laid back, though you can play it more seriously. Deck construction naturally lends itself to simple to grasp through lines. Hell, it’s even easier to swallow and justify the cost of an expensive card when you only need one of them.

For the last several years WotC has been putting out Commander products and there’s even been a shift in card design in the regular releases. For instance, the phrase “each opponent” is way more common lately. Let’s be honest, there have been a few stumbles along the way with MSRP and availability, but WotC seems committed to stepping up their Commander line to a yearly release. Commander 2011 and 2013 explored three-color wedges and shards, 2014 was mono-colored with planeswalker generals, and 2015 is set to explore the enemy color pairings. Commonly referred to as Orzhov(White/Black), Izzet, (Blue/Red), Golgari (Black/Green), Boros (Red/White), and Simic (Green/Blue).

I’m going to run down the spoiled ten generals and give some initial ideas of what you might build around them, though the last few Commander products have been very playable right out of the box. This won’t be the only way to utilize them however. Keep in mind that this will be through the lens of my own Commander group, which is squarely anti-combo and degenerative strategies like mana denial. 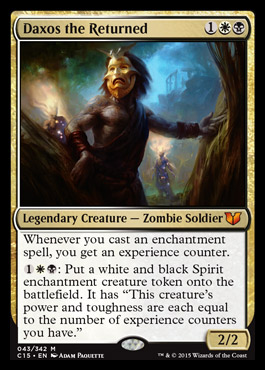 Due to the popularly and necessity of board sweepers in Commander, tokens are naturally a pretty popular strategy. While folks are still reeling from getting their board wiped out, you can rebuild much faster since most of your cards are built in as several creatures. This typically gets supplemented by various [mtg_card=Glorious Anthem] effects, which are multiplicatively effective when you’re making lots of creatures. Daxos the Returned comes down early picking up experience from your [mtg_card=Cathars’ Crusade], [mtg_card=Intangible Virtue], and such, and then in the late game you can use him as a [mtg_card=Mobilization] that spits out much bigger creatures.

Karlov of the Ghost Council 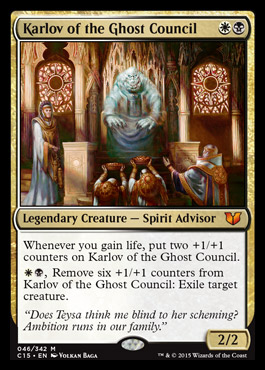 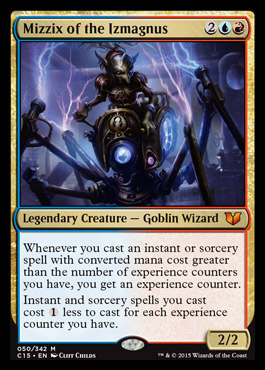 On some level Mizzix of the Izmangnus sort of builds itself. Put lots of flashy instants and sorceries in your deck until you live the dream of casting [mtg_card=Time Stretch] for only double Blue. Spells with X in their casting cost work especially well with Mizzix of the Izmangnus because on the stack an X spell has a CMC equal to what X and whatever other mana requirements there were. Even if Mizzix of the Izmangnus is making that spell very cheap its CMC doesn’t change, and thus it could still trigger the ability. Go out and [mtg_card=Epic Experiment] into [mtg_card=Prophetic Bolt], [mtg_card=Bribery], and [mtg_card=Dig Through Time] like a good goblin wizard should! 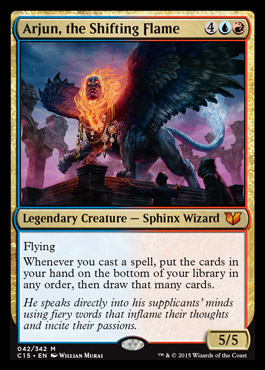 Arjun, the Shifting Flame is a weird card; I don’t think anyone can think otherwise. It’s [mtg_card=Mindmoil] on 5/5 flying body, but this is the kind of card that a certain group of players just love, because it’s sort of a puzzle box – which is super flavorful since it’s a sphinx. One avenue you can go with it is to use [mtg_card=Jace’s Erasure] and [mtg_card=Sphinx’s Tutelage] to quickly mill your opponents out. It’s also decent enough on its own as a value play, with enough cheap cantrips you can [mtg_card=Tunnel Vision] through your library essentially. 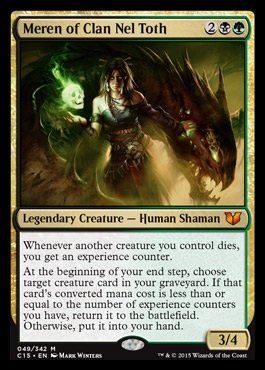 Meren gets my nod as being the best of the bunch in a vacuum. There are plenty of shenanigans to be had with the others, but her ability most directly equates to getting value every turn and grinding your opponents out. Unlike a lot of the other experience counter mechanics; you don’t need to do any work for Meren to start doing her thing. Granted once you’ve put some work in you can start reanimating your creatures instead of simply [mtg_card=Raise Dead], but that’s still card advantage. There’s plenty of cards like [mtg_card=Grizzly Salvage] and [mtg_card=Mulch] to fill up your yard, and dredge, [mtg_card=Life from the Loam], is always on hand to keep the cards flowing. You can even combine that with say [mtg_card=Worm Harvest] and a sacrifice outlet to quickly get your experience counters high enough to bring back giant threats every turn. 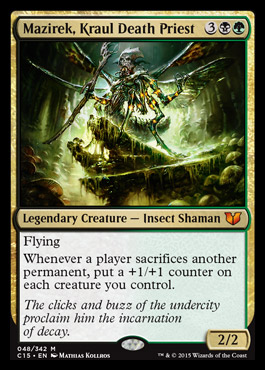 See above, but now your team gets out of hand really fast, especially if any of your opponents are also on some kind of sacrifice strategy – or you know has fetchlands in their deck, thanks for cracking the land! Note that Mazirek, Kraul Death Priest also has flying and buffs himself, so sometimes you might just lethal with him by eating up a board full of creatures, similar to [mtg_card=Prossh, Skyraider of Kher]. Obviously the more creatures you have on the board, the more value and fuel you’ll have for the ability. It practically goes without saying that Mazirek, Kraul Death Priest and [mtg_card=Doubling Season] are going to be the best of friends. There’s also plenty of +1/+1 matters cards like [mtg_card=Corpsejack Menace], [mtg_card=Kalonian Hydra], and graft creatures.

Or just cast [mtg_card=Death Cloud] and [mtg_card=Smallpox] in a multiplayer game, you monster. 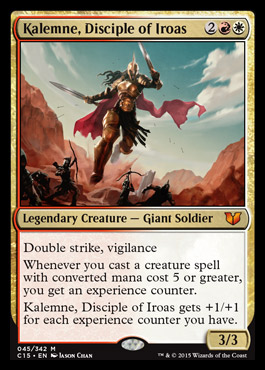 While not as initially exciting and interesting, decks and generals like Kalemne, Disciple of Iroas do serve an important purpose for the format. While the occasional epically long game can be fun, it’s nice to have someone actively putting a clock on the game. It’s also critical to have something that “builds itself” for players who aren’t intimately familiar with say every sacrifice outlet printed in the last 20 years. There are always going to be some subtle nuanced selections that experienced players will understand better, but for the most part you can jam whatever big Red/White creatures you have laying around. The best inclusions will be ones that support Kalemne, Disciple of Iroas. Imagine curving into [mtg_card=Battlegrace Angel] and attacking with five power double strike and lifelink. Besides creatures with five or more CMC, you might also want to pair Kalemne, Disciple of Iroas with a light equipment theme. Ideally you really want a way to get her some evasion so she doesn’t just get chumped every turn. 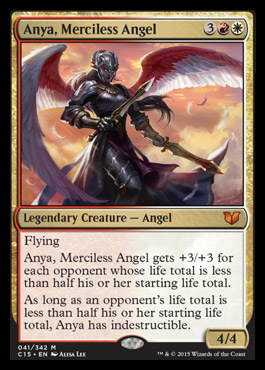 For the most part you can simply see above. Anya, Merciless Angel wants to be in a deck that beats down. She does have some great synergy with [mtg_card=Hearltess Hidetsuga] though. Going into a Mardu deck would open up additional options for chopping up life totals like [mtg_card=Sorin Markov] and [mtg_card=
Havoc Festival]. 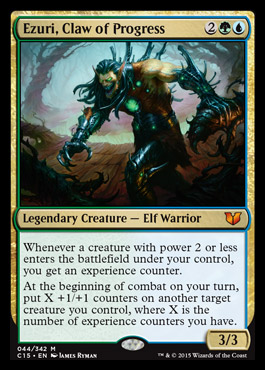 First things first. Drugs, not even once.

That out of the way, Ezuri, Claw of Progress has a few directions you can run with him. For starters, pretty much all the infect creatures are going to trigger his ability. It’s a little anti-synergy that you’d want to cast cards like [mtg_card=Blighted Agent] after casting Ezuri, Claw of Progress, but he does ensure that you have a bit more late game staying power. Similarly, you could pair him with all the [mtg_card=Scroll Thief] and [mtg_card=Edric, Spymaster of Trest] style cards, which also tend to be on the smaller side, and get quite the draw engine going. And there’s plenty of Simic counters shenanigans to be had, though it’s questionable if Ezuri, Claw of Progress is a better build around than say [mtg_card=Experiment Kraj] or [mtg_card=Vorel of the Hull Clade]. 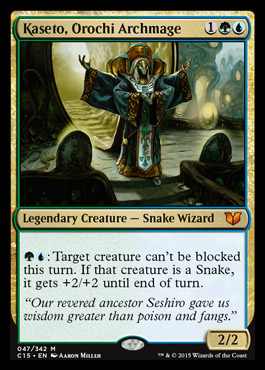