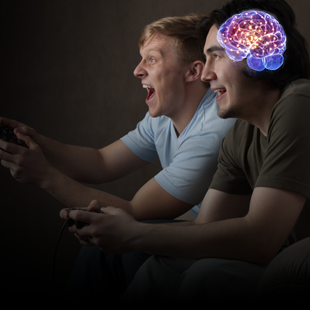 Video games designed to induce “neural reprogramming” can help improve sight, hearing, and memory – not through acquired skills, but by actually changing your brain.

“It’s a little bit… hard to believe, in a certain way,” said Dr. Victor Zordan. “But I’ve done it myself – I’ve submitted myself to this process. It’s… kind of crazy.”

Fully aware that his research straddles the line between the groundbreaking and the fantastical, Dr. Zordan was hesitant to speak too enthusiastically about the work that he and his colleague, Dr. Aaron Seitz, are pursuing.

“So are we saying that, for people who are partially hearing- or vision-impaired, these methods could restore some eyesight or hearing?” I asked.

After a moment of reflection to ensure he would not misspeak, he replied without a hint of doubt:

A neuroscientist, Dr. Aaron Seitz is an expert in neuroplasticity – the sense that the brain is much more flexible and changeable than we’ve believed for centuries, as Dr. Zordan described it. Together, the two are furthering research into developing video games that effectively reprogram a player’s brain to think, see, and hear better.

“The cognitive testing that has gone on in his field has shown that we can essentially manipulate the brain in directions that we would like,” said Dr. Zordan, an expert in computer science and engineering. He and Dr. Seitz are currently mid-stream in their research, with some “interesting” initial findings and a beta version of a memory-training game, which they plan to release to the general public.

The concept of memory-training may not sound novel to you, but we’re not talking about learning new techniques to help improve your memory – we’re talking about neural reprogramming. “That’s where it gets interesting,” said Dr. Zordan. “The brain function actually changes. You don’t necessarily develop a new strategy for remembering things – your neural connections are reconfigured.”

Memory is just one example, but this concept can extend to problem solving, hearing, and sight. Deliberate neural reprogramming through video game playing is what Dr. Zordan and Dr. Seitz are pursuing – they are designing games that elicit improvement within the brain.

Sounds too good to be true? Buckle up; they have results.

“The brain function actually changes. You don’t necessarily develop a new strategy for remembering things – your neural connections are reconfigured.”

Before their partnership, Dr. Seitz worked on a vision-training system that he tested with the UCR baseball team. According to the team’s statistics, that system gave the team an additional four-to-five wins over the course of the season, the team had fewer strikeouts, the players scored better on eye charts, and the players themselves reported having better vision, all relative to a control group.

How can this be possible? Many of us have heard that playing certain video games – such as First Person Shooters – can help train peripheral vision. But actually seeing better?

What’s important to keep in mind is that vision is a coupling of the optics and the brain, Dr. Zordan explained. The eye – the physical organ – collects information, and the brain then processes that information. The vision training program does not affect the eye itself, but the optical processing done by the brain. In other words, “it’s really just optimizing the way that the brain uses the information that’s coming through the eye.”

As incredible as the vision-training system sounds, Dr. Zordan believes it can be improved by gamifying it. “There is evidence to support the hypothesis that making the system into a game not only improves people’s willingness to play, but it also improves the impact – the effect of the training,” he said, pointing to a published study that noted an increase in gray matter correlating with a player’s desire for video gaming.

“I’ve actually changed the things that I can remember… I feel like I’ve got an upgrade, and I’m still getting upgrades.”

Based on MRI scans, people who enjoyed playing the game built more gray matter. Dr. Zordan and Dr. Seitz are presently conducting a study to see whether people get more benefits from a game designed to be fun versus one designed to be boring, and the expectation is that training on the fun game will yield better results.

For decades, both anecdotal reports and scientific testing have told us that playing games affect people in various ways. The action genre, for instance, can improve a gamer’s ability to track multiple objects, increase attention, and as previously mentioned, to have better peripheral acuity. “There’s a laundry list of different findings,” said Dr. Zordan. “It’s been shown that you can take someone who is a novice, who doesn’t play games, train them on an off-the-shelf game by having them play the game one hour a day for a couple of weeks, and the expected measurable skills are improved.”

And that is simply a consequence of playing a game designed to be fun – what if the game was designed from the ground up to create those benefits? That’s exactly what Dr. Zordan and Dr. Seitz are trying to do. “The notion is that if we can reverse-engineer the process by which the game elicits that training,” said Dr. Zordan, “then we can purposefully create games that have different impacts.”

Within the last year, Dr. Zordan has developed a memory-training game and has been putting it to the test – on himself. “I’ve actually changed the things that I can remember,” he said. “And I recognize it – there are occasions where I tell myself, ‘I wouldn’t have remembered that a month ago.’ I wouldn’t have – I know myself well enough. I feel like I’ve got an upgrade, and I’m still getting upgrades.”

The cure for blindness, deafness, and memory loss?

Now, before we think that neural reprogramming can be a magical cure for impaired senses and memory, we must once again highlight that the physical organ is not being affected. Neural reprogramming will not repair eardrum damage, for instance – but it can allow someone to get more use out of their damaged ear. Still, there are certain auditory disorders that this method can potentially cure.

Tinnitus is a condition in which a sufferer constantly hears a ringing sound in his ear. While it can result from a wide range of causes, in the case of a cause that is not mechanical, Dr. Zordan believes that a neural reprogramming game – employing a process called “perceptual learning” – can train the brain to suppress the ringing sound. How? The same way we “learn” to “hear” anything.

As a human being develops, depending on environmental factors, the brain specializes the processing of sound to be more or less sensitive to different stimuli. For example, in the Japanese culture, the brain is specialized to be insensitive to the distinction between the “L” and “R” sounds. This is why native Japanese speakers have difficulty pronouncing those sounds – because they are actually unable to distinguish the difference. “If you do a thorough analysis test on their hearing, you’ll find that their hearing is perfect,” said Dr. Zordan. “Their ear is not the problem. It’s that there’s something on the other side that has actually been specialized, based on their training, to not distinguish between those sounds.” Similarly, Dr. Zordan believes that a hearing-training game can make a sufferer of tinnitus unable to distinguish the ringing sound any longer.

Other areas that Dr. Zordan and Dr. Seitz want to focus their neural reprogramming efforts on involve traumatic brain injury, testing their memory game on seniors with Alzheimer’s and children with ADHD, as well as providing benefits for the general public who may want to see, hear, think, and remember better. But before neural reprogramming can start changing the world, first things first: getting that first game through its development cycle and officially released.

Dr. Zordan’s memory improvement game is still under construction, but a beta-version is available to the public for those who would like to try it out. You can