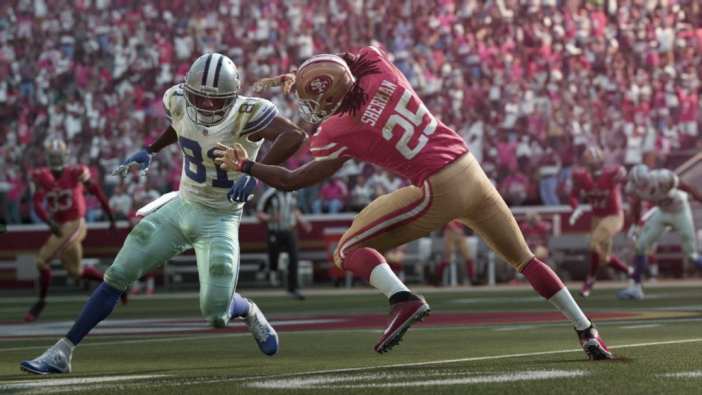 We’ve had too much practice already. The only certainty is we will have more.

Like a specter in the mirror, the space between us and tragedy always seems larger than it is. By which I mean it was only yesterday that a man shot and killed two others and injured at least nine more at a Madden tournament in Florida. Although it feels like this happened months ago, or more.

The nature of tragedy is to imprint itself onto our psyche in ways simultaneously too real and too distant. As we wind forward away from the event, all will be remembered about the competition is that people died. Even as we seal away the memory to try and go about our lives, this burning thought will itch inside of us: people died there.

Taylor Robertson was from West Virginia and had won the Madden Classic tournament two years ago, according to CNN. Eli Clayton was from California. They’re gone now, to wherever your beliefs tell you. Try to remember them and keep their souls and the hearts of their families in your thoughts lest their names fade long before the echo of this tragedy.

Like most tragedies, this one, too, has a cause. It seems small in comparison to the effect – that two young men died doing what they love. For sake of clarity, I will tell you, although you can skip past this bit if you already know,. (There will be a time and a place for recriminations, and blame. That time is not now. Now is for grieving.) A man with a gun shot them. He was, according to some reports, a competitor at the event, who had lost.

A lot of the attention from media outlets will focus on this person, whom I have not named (and will not). We will analyze his possible motives. We will study his fateful choices. We will try to understand.

There will be experts and politicians talking about this for days, perhaps weeks. They will try to label this man, this shooter, something logical. They will say it must be his mental health, or his habits. They will attempt to pack him away in a box along with this horrific tragedy so that his memory can no longer bother us with its resemblance to those we love, or ourselves.

If this man were still alive, there would be a spectacle made of him so that, by singling him out, we might warp reality to show that he was not (couldn’t be, really) one of us. But he was. One of us gamers. One of us men. One of us humans. By turning his gun on himself he erased some of the urgency of this effort. He, too, is now one of the dead.

Some may claim that this gun-man is also a victim. That his hobbies, or his upbringing, or his mental state caused him to commit this heinous act and then take his own life, and that we must grieve for him as an equal to those he killed. There is no doubt that this tragedy is just as intense for those whom he loved, and by whom he was loved, and that, for them, the grief is magnified by the shame and horror of their association with this murderer. But we must not forget that no matter what drove him, he did this heinous thing. He was a son, a friend, a competitor, a community member, and he killed. Whatever else can be made of him, this he made of himself.

Was it video games? That’s the elephant in the room. Not the answer to the question, really (we know it wasn’t), but the question itself. We know now from long experience that once the dead have been buried, and the guilty have been catalogued, the grief will turn to anger and the search for a true culprit will erupt anew. And the experts, and the politicians, and the grieving families, and those who fear this might some day happen again (which is all of us) will search for A Cause that can be isolated and exorcised. Removed like cancerous tissue, lest it infect another.

Video games. This tragedy – unlike so many others – is connected with a line as hard as a bullet, and as stark as a drop of blood: It happened in our community. At our event. And (likely) over the outcome of a video game. Video games.

We are all stakeholders in this, the occurrence of gun tragedies in America. All of us who live here, visit here, look here for moral and political guidance in the larger world, have a stake in how we address these tragedies. And someday, we hope, those who truly have the power to make change will draw a line between each of these hundreds of shooting tragedies directly to the one inescapable link connecting them all: the gun. Whether that body of rational humans will be those we’ve elected to power, or those of us who elected them will make the change remains to be seen. What we know, however, from too much experience is that more of us will die before it changes.

Whatever may change in the wake of this tragedy, and we sincerely hope that something does, we must move on. We must wake up the next day, attend the next event, play the next game. We must live. In fear, perhaps, but also in defiance. We will live on. We will not let these moments define us. We will grieve and then we will grow. We’ve had plenty of practice.