Yakuza 4‘s cutscenes might have seriously outstayed their welcome at times, but I will admit this. There’s a cutscene towards the end that I actually thought was really cool. After the four playable characters have all finally met each other and realized they’re all on the same side, they form a little boy’s club, and you can switch freely between them to polish off whatever sidequests you left behind. But when you do make it clear to the game that you’re ready for the final mission, all four of them put on black suits and walk abreast to the location of the final showdown Reservoir Dogs-style.

It doesn’t sound as cool on paper, or indeed in the pixelated words that pass for paper these days, but I think that’s the point. It was cool to me because I’d spent the last however-many hours playing as all of them, experiencing their own dramas and struggles, in some cases playing as one while fighting another, and it was just nice to see all these guys I’d gotten to know get together and become a sort of League of Extraordinary Gentlemen from when that was still good. It’s like that curious satisfaction one feels when you find out some celebrity you like is best friends with another celebrity you like.

I’ve written at length in all my various venting avenues about how important it is to have characters that we can get emotionally attached to in games with any kind of story. And there’s really no reason we shouldn’t because videogames make it easy. The player is automatically emotionally attached to a character they’re controlling. Videogame protagonists with no personalities whatsoever can still be popular characters, but if Gordon Freeman was a character in a film, you’d think he was autistic or something. There are an awful lot of characters in games who would have been infinitely more sympathetic if the developers had just put less work into them. And incidentally, if any of the Uncharted 3 developers are reading this, I promise to give it a better review if you include an unlockable costume for Nathan Drake that incorporates a big piece of duct tape over his mouth.

But critiquing Yakuza 4 raised something that I’ve neglected in all my talk of emotional attachment, and that’s the fact that human beings can become attached and sentimental to things other than human beings. And here I suppose the words “companion cube” might loom ominously behind my shoulders, but that’s not where I’m leading with this (the companion cube was technically a character in that pseudo-anthropomorphic qualities were projected onto it). I’m referring to the sentiment one feels for a place with which we’ve become familiar.

After finishing Yakuza 4 I went back to have a look at Yakuza 1 on the PS2. I was a little disappointed to find that Y4 rips quite a few things off from its predecessor, including a prison canteen fight and the inevitable shirtless rooftop punch-up, and the sandbox world, the fictional commercial district of Kamurocho in Tokyo, is the exact same one, right down to the street layout.

And while the slight laziness of it all was disappointing, it was at the same time, quite interesting to see the ways in which Kamurocho had changed in five years (and between consoles). Seeing the businesses and billboards that had come and gone, the random pavement walkers one sees making their way around town, and to recognize a spot where I had fond memories of trying out a new finishing move that involved piledriving the bridge of a hitman’s nose into a section of handrail. 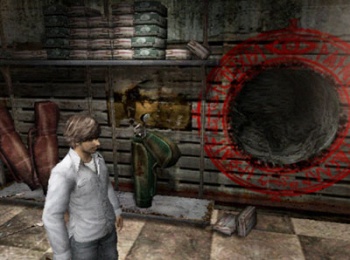 The human mind makes connections to places almost the same way it does to people. Locations can have arcs just like characters do. That’s something to bear in mind when you design a story.

My favorite example of exploiting this factor is Silent Hill 4. Now, that’s not a great game by any stretch of the word, but I liked that the series was still trying new things, and the most important aspect of that game was The Room. The main character is locked inside his apartment for the vast majority of the game, with the actual game part taking place within questionably real descents into haunted worlds, dreamlike experiences interrupted frequently by our hero waking up back in his own bed to wander around his house some more, heal up, save the game, store items, turn the radio on and off, the sorts of things I do when I’m getting some writing done. The capital-R Room is a constant fixture and safe haven, an island of stability in a game of cruelty and madness. But where it gets clever is half-way through the game when the nightmares start to invade the physical reality of the Room. Suddenly being in the Room no longer regenerates your health and ghosts start appearing, which you have to exorcise to get the best ending. This is a great example of letting the player get comfortable with a place, then taking that comfort away to let them know the stakes have risen. I used to mess around with similar themes in my adventure games.

There are a lot of other games with a “home base” that eventually gets invaded, like Deus Ex or Nier, but you can see the same principle on a smaller scale at the start of Half-Life. You have to walk all the way through your lab before the disaster, exchanging nods with other scientists and getting the strong impression that this is something your character has done every day for who knows how long, and then when the disaster strikes you have to walk all the way back through the lab, the cold, clean, banal hallways now littered with blood, corpses and monsters. In the Half-Life expansion Opposing Force you catch a glimpse of a few locations from the original from a different perspective and it creates a little jolt of recognition.

So this is Yahtzee’s little game storytelling nugget of the day, chaps. If your game is a linear succession of locations with nary a backward glance then the most you can do is make the player go “Ooh, that’s pretty.” But it’s only when you give the player something they think they can rely on that you can really start to mess with their feelings. It applies to lots of other things, too. For example, when I have guests in the basement, it’s vital to always give them at least some notion that they could possibly escape, or they stop being entertaining.