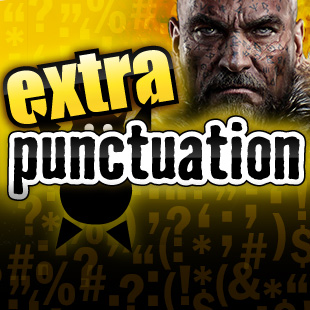 I’m given cause to think about highly specialised development tools. Like Adventure Game Studio or RPG Maker or that thing that makes visual novels. I used to use AGS for my personal game dev projects, while I was still in something of a learning phase (not that one ever stops learning, I mean ‘learning phase’ here as a euphemism for ‘back when I was more shit’), but these days I prefer to use nonspecific dev tools like Game Maker. Partly that’s because I’m interested in a wider range of game types now and prefer the greater flexibility, but partly also because I tend to be quite auteur-y with my game dev projects and a game just doesn’t feel like mine if I haven’t made all the code from the ground up, and don’t understand exactly how it all works.

I guess that’s one of the reasons why I’ll never hit the big time, ‘cos it seems like triple A games these days are like patchwork quilts, constructed from third party physics engines, textures and animations from online libraries, and renderers that still contain code that goes all the way back to Quake. Some games feel like so much of them have been stitched together from spare parts that there’s nothing of their own identity underneath. Which brings me to Lords of the Fallen, the last game I ZPed.

I bring up specialised dev tools because – bear with me on this – Lords of the Fallen feels like a game that was made with one. Specifically, a specialised dev tool designed for making games like Dark Souls. It feels like they started with the basic Dark Souls model already there, and then made slight alterations by adding or removing a few bits. In fact, scratch that, Lords of the Fallen looks like the example game that came with the dev tool.

I’m not gonna get up its arse for being a Dark Souls clone, I think that’s a very brave thing to attempt. And besides, we used to call sandbox games ‘GTA clones’ and FPSes ‘Doom clones’, maybe this is the path to Dark Souls starting a whole new genre, called something like ‘Here Comes The Shit Pipe Open Wide’ or perhaps just ‘Aaaaa’. And obviously I’m totally OK with that, and the raw gameplay and combat of LotF is solid enough to pass the time with, it’s just that everything else about the game has this sort of ‘placeholder’ feel to it.

In fact, if you have no creativity whatsoever and need to come up with story, characters and visual design for an action fantasy game, you could take Lords of the Fallen as a pretty good how-to guide. 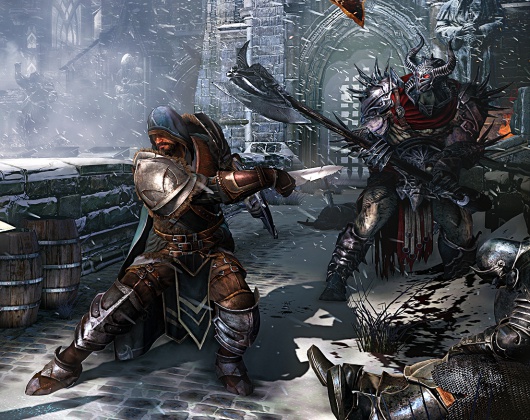 Next up, you need to decide on a visual design. Take the color palette and throw away everything past a saturation level higher than that of a winter’s late afternoon in Dunstable. Next, design your main character (and indeed every other character) by drawing about 12 different armor concepts, and then smashing them all together so they appear to be trying to wear all of the armor at once. Basically, if you have zero understanding of even the most basic aesthetic concepts, like readable silhouettes or bringing across backstory and personality through visual flair, then the best way to compensate is to keep adding detail. We want the combat to look less like two desperate warriors squaring off and more like two clouds of saucepans bashing into each other.

Make sure that 90 percent of the weight is concentrated in the shoulder armor, and don’t forget to add spikes. Never mind that if your character’s head gets knocked to one side they’ll probably get impaled through the cheek. If you (or more likely, your polygon limit) are troubled by the spikes, then alternatively carve a skull face into where the spikes would have gone. Don’t worry that you’ve added so much detail that there’s barely room for any additional details for upgraded versions of the armor: there’s always room for another skull or two and it’s not like it’ll look any worse. Multiply zero and you still get zero.

Digressing for a moment, I’ve had an idea for a while now to write a story set in one of these ‘hardcore fantasy’ worlds, but from the perspective of the guy whose job it is to carve skulls in things. I imagine it being quite an artisan’s trade. You know how, in olden days, certain craftsmen had very specific jobs, and often took their surnames from it, like how a Cooper was a guy who made barrels, and a Fletcher made arrows? It’d be like that. John Skuller, in his little workshop directly between the armorer and the dungeon architect.

So now you’ve got a look for your character, you need a personality. Now, coming up with characters is a skill that many have tried to explain, and often the only right answer seems to be that it depends on your personal approach to writing, but all those people just weren’t trying hard enough. All you need to do is write every character like they were raised by bears during a rabies epidemic: constantly angry, prone to inflicting violence upon anything they don’t understand, and immediately filled with contempt and distrust for every single person they encounter, lest they have their jaw knocked off by a single swipe of mighty ursine paws. You’ll then find that the plot will come together fairly naturally. The vast majority of ‘hardcore fantasy’ plots could be resolved in five minutes if there were just two characters capable of sitting down and discussing the situation civilly.

And there you have it. Follow these directions, and you, too, will have successfully filled the blanks with no effort whatsoever, you unambitious twat. But you probably didn’t need any further instruction since you mastered the art of uselessly taking up space throughout your entire education. OHHHHHHH