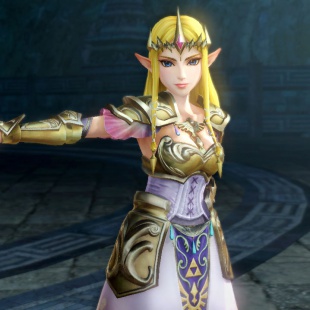 I gotta say, I didn’t really understand the whole Dynasty Warriors take on the Zelda franchise. Why mess with the winning formula with Link in a puzzley RPG? But then I got to pick up that fancy Wii U gamepad and play me some Hyrule Warriors and … I’m still confused, but dang if I didn’t enjoy killing a few thousand enemies along the way.

The build I played at Nintendo’s E3 2014 booth only had Link and Zelda playable and I decided to pick the more masculine-looking character – Princess Zelda. I kid. But it was cool to pick up Zelda’s rapier weapon and get tossed into the world, beset by tons of enemies. You attack with X and make a stronger attack with Y, but you can also hold down these buttons in various combinations to take out ten or twenty goons at a time. It’s unclear what the default enemies are in Hyrule Warriors – they just look like weird brown humanoids but they are actually supposed to be moblins – but I sure killed a lot of them.

You can certaanly get lost in just killing – and I did for several minutes – but there’s a point to all the slaughter. Glancing down at the gamepad, I could see the map had a bunch of areas that could unlock challenges or goals that would sway the battle to my side. Heading to one of those areas, I saw a prompt which said “Kill the Captain.” I promptly did so – I do whatever the video game tells me to do, I’m weak that way – with a devastating special attack I had saved up from killing so many moblins. In a glorious quick cutscene, Zelda pulled out a golden bow and shot an arrow at the larger moblin, felling it and all the baddies around him instantly.

Behind that objective was a small cave that led to a chest. Zelda never gets to open chests, this Hyrule Warriors game is breaking gender molds! The prize wasn’t loot or rupees or some piddly crap – it was bombs! If this is truly a Zelda franchise game, I know I’ll be able to use those soon. If not, I’ll declare this game complete bollocks and be done with it.

Hey look, at the top of this cave, there’s some rubble that somehow formed while I was down mucking about with the chest. Can’t clear ’em with my rapier. Oh wait a second, I have some explosives, don’t I? Well, well, this is Zelda.

And you know what finally convinced me? After taking out a few more objectives on the map, a huge boss appeared – Dodongo. You know how you kill the massive dinosaur in every freaking Zelda game since the first one? Bombs!

So, in conclusion, Hyrule Warrior is like Zelda. The end.

Seriously, while I had my doubts, there are some interesting things going on with this game. If Nintendo can make me enjoy all the brainless attacking and killing that’s involved with a game in the style of Dynasty Warriors while pulling on the nostalgia strings for Zelda games, all while offering gender diversity in its playable characters, then it certainly has my attention.

Look for Hyrule Warriors to come out on September 26th for the Wii U.