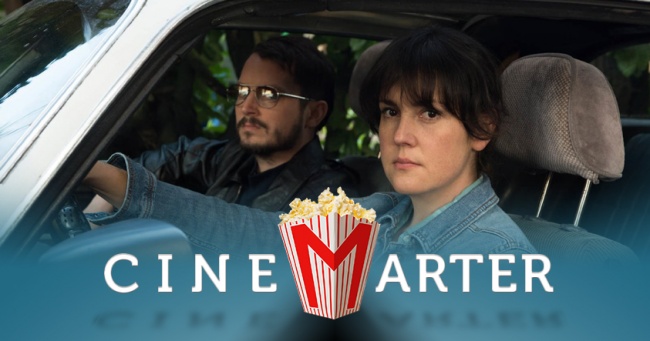 I Don’t Feel at Home in This World Anymore is a film that almost immediately puts us on the side of its protagonist, Ruth (Melanie Lynskey), who spends her days as a nursing assistant and her nights being annoyed by the various awful ways in which her fellow humans treat each other. You know, small, largely irrelevant things, like cutting in line, not picking up after their dogs, or revealing major spoilers in a series someone’s enjoying. Snape kills Dumbledore. Annoying things like that. They don’t massively impact anyone, but they show a lack of respect for one’s fellow human being.

Within a few minutes of us knowing Ruth, she suffers a break-in to her home. Not much is stolen, but the thought of someone inside her house is enough to disturb her. The police officers that show up to investigate seem less interested in her case than she thinks they should be. Her phone can track the laptop, but they won’t go to the location it’s broadcasting; they can only add it to her file and wait for a search warrant she knows will never come. This woman is fed up with the world, so she decides to take the case into her own hands. Joined by a neighbor she chewed out earlier (Elijah Wood), she sets out in search of her stuff.

It’s a simple enough set-up for first-time writer-director Macon Blair, but it’s an effective one. We get placed into Ruth’s headspace early on, see something even worse happen to her that understandably pushes her over the edge, and then we get to sit back and enjoy the ride. I Don’t Feel at Home in This World Anymore isn’t a serious crime thriller – it’s too enigmatic and low-stakes, for the most part, for that. But it in some respects feels more personal, and is more affecting, because of that.

The characters are all a little odd. Not unrealistic, but just the slightest bit strange to the point that it’s noticeable. It keeps them interesting. Even the villains have their own little quirks that make them more than these characters would be in a different movie. There isn’t a whole lot of depth or development here – no significant realizations or reveals occur along the way – but by modifying stereotypes, Blair instantly makes his characters more engaging for the audience.

I Don’t Feel at Home in This World Anymore is a quirky movie that is more than good enough to be worth recommending.

Ultimately, though, it does all feel a little shallow. Even with its mild social commentary regarding the way in which we treat each other, it doesn’t have a whole lot going on beyond pure entertainment value. More character depth or point would’ve gone a long way into turning it into a fun distraction into something that everyone should see – although it is good enough on its entertainment merits to be worth recommending. It just winds up being one of those “really good; I wish it were even better” types of movies.

I Don’t Feel at Home in This World Anymore does manage to balance its various tones well, which is to its credit. It’s sometimes violent, often funny, and frequently angry, and it doesn’t create tonal whiplash when switching from one to another. It’s never not effective at generating whatever response it wants from the audience. It lacks staying power, but in the moment it’s quite an enjoyable experience.

Melanie Lynskey hasn’t gotten many starring roles, but she probably should. She has a warm demeanor, one that immediately makes her sympathetic – and seeing that, in part, turned on its head midway through I Don’t Feel at Home in This World Anymore is very effective. It’s a vigilante movie, kind of, and seeing her get to do things like barging into rooms and demanding things or brandishing a gun is fun in and of itself. Elijah Wood is a reliable sidekick, and many of the supporting actors like Gary Anthony Williams, Jane Levy, David Yow, Christine Woods, and Devon Graye all get one or two enjoyable moments.

I Don’t Feel at Home in This World Anymore is a quirky movie that is more than good enough to be worth recommending. It’s a relatively simple movie about a woman wanting her stuff back from robbers, but it throws in enough interesting details and moments that differ from similar movies to make it stand out. It lacks depth, but is good enough from a pure entertainment standpoint to make a watch worthwhile.

Bottom Line: I Don’t Feel at Home in This World Anymore is an enjoyable offbeat crime thriller.

Recommendation: There’s more than enough good in I Don’t Feel at Home in This World Anymore to warrant a recommendation.