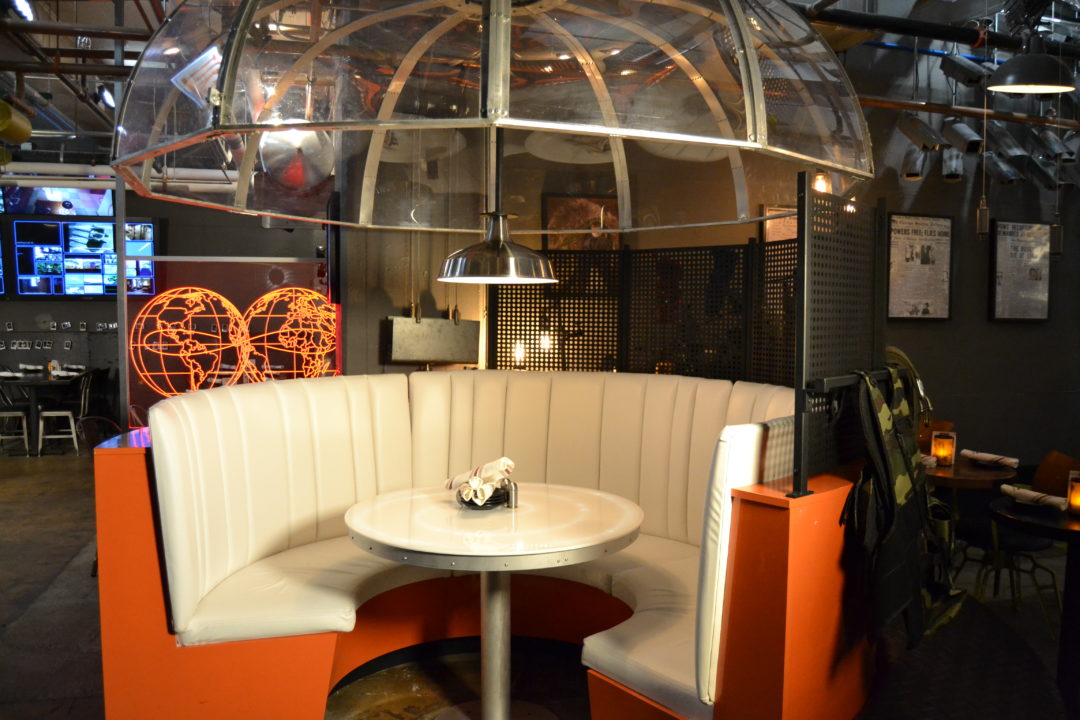 SafeHouse is one of several spots in Chicago’s bustling River North neighborhood that doesn’t have a sign. Prohibition’s legacy still looms large in the Windy City, and it’s filled with unmarked basement nightclubs and cocktail bars tucked into alleys. But SafeHouse isn’t one of those.

A nondescript sign outside the bright red door gives the illusion that the building houses office space, but the names are a giveaway that something isn’t right. There’s a lawyer named Sue Ing Yoo and the urologist Peter Pantz. Step inside and things get even sillier.

The door opens into a fairly spartan reception area, largely distinguished by a portrait on one wall where the eyes seem to move. We were greeted by a sharply dressed man sitting at a desk who asked if we had the password. “Am I supposed to?” I asked. “Yes,” he responded. “But that’s OK. We have other ways to confirm you’re not a double agent.”

It was time for a “clearance test,” which in this case meant showing we remembered the martial arts training we received as spies by mimicking his demonstrations of a series of highly exaggerated moves complete with sound effects. After the demonstration, he concluded that only one member of our party had sufficiently shown her skills. Us rejects were paired up to show our reflexes in a duel, lining up back to back, walking three paces and then turning and shouting bang, which triggered a loud gunfire sound. I won my duel, though my opponent wasn’t punished with yet another trial. “One last thing,” he added before letting us in. “Do you have a reservation?”

When we got downstairs, the hostess took my name and said we’d done well with our authentication. I looked up with horror to discover that multiple screens throughout the space were playing feed from the reception room and got to watch a family go through similarly embarrassing trials. We were shown to our table, where our server introduced himself as Agent Crypto and informed us that after getting in trouble for inventing Bitcoin he’d been banished to the SafeHouse. He doled out name tags and a Sharpie, encouraging us to pick our own spy names to go by while we dined. I chose Duchess in honor of Sterling Archer, who has his own cocktail on the menu that blends bourbon, lemon and pear juice. It seems a little classy for the spy who’s willing to drink rubbing alcohol and Barbasol.

The menu is about what you’d expect for a family friendly theme restaurant. The appetizer section dubbed Q Branch — every agent should start their mission with a visit to Q — includes cheese curds as a nod to the original SafeHouse in Milwaukee and a giant soft pretzel served on a plane-shaped platter with cheese sauce and mustard. Everything has goofy names like the Double Agent, a cheeseburger with two beef patties, and Goldfingers aka chicken fingers. The cocktails were on the weak side and the food was decent but unimpressive. If what you want is a really delicious meal and drinks, there are a huge number of options just blocks away. If you’ve come to SafeHouse, you’re here for the spectacle and the bizarre experience.

There the restaurant doesn’t disappoint. Once we’d ordered, our server delivered a mission briefing, a guide to the spot’s major attractions with descriptions turned into riddles like “Enlist the help of an agent who is trained in magic, in order to avoid results that are tragic.” We set out exploring the space, which is something like a cross between a spy-themed Hard Rock Café and a gonzo museum. Our table was situated in the Spybrary, which has a collection of spy-themed books but also a piece of the Berlin Wall and an Austin Powers poster with the pillar painted to match it’s psychedelic bright colors. Kids gathered around a nearby console covered in little interactive activities like an eye scanner that shows you a close-up image of your eyeball and a puzzle that can be solved to open a small wall safe.

One family was dining in a booth equipped with a “Cone of Silence” from Get Smart and secondary bar area that can be rented out for private parties that’s decked out in Austin Powers memorabilia. Elsewhere is a digital map of the world, where clicking on specific cities will show you drone footage, and a periscope that’s actually a digital camera with a view of the main bar. A digital wall honoring fallen members of the military is a nice gesture but feels out of place set so close to a display of the patches of spy organizations that features the logo of Marvel’s Hydra alongside the CIA and MI6.

Tucked into a corner is a magic lounge where Agent Blackjack performed some genuinely impressive close quarters card tricks for tips. There’s also an enclosed photo booth where visitors are encouraged to take pictures and post them on social media with the hashtag #stealthyselfie. While there were plenty of families I was surprised to see just how many people seemed to come to SafeHouse for date night or drinks.

The bathrooms are also listed on the mission briefing as must-see attractions. One door just opens into a brick wall. The women’s room features “Mata Hari’s outpost,” a mirror that lets you look out at people from outside who won’t be any wiser unless you choose to light up your face. There’s also a picture of Daniel Craig reclining on the beach covered only by a fig leaf. Press on it and you’re hit by a burst of air and the sound of Austin Powers laughing. I didn’t get to go in the men’s room, but you’re encouraged to make sure you flush the toilet there for some reason.

Our server maintained character throughout the meal, asking if we were ready for “evidence” to be cleared away after we’d finished eating and always addressing us by our chosen spy names. The check comes with a lockpicking test, a little basket filled with mechanical puzzles. Solve one by the time the server returns with the paid bill and you’ll get a discount for the merchandise store or a future visit. After that it’s time to sneak out the back.

The red door is a one way entrance. Getting out requires navigating a hallway with a laser grid activated through entering a code you’ll get from a phone. You can test your acrobatics skills or just walk right through and trigger the alarm. The industrial walls are covered with discarded name tags and it’s pretty entertaining seeing what others have picked for themselves. I found my way up a set of stairs and into the lobby of a nearby hotel.

The password is hidden four places in SafeHouse. One is the mirror of the women’s bathroom and while I could make out some words in a jumble of letters, numbers and symbols I’m not sure what code would actually get me cleared if I returned. Apparently even if you know it, you’re just encouraged to whisper it and let anyone else in your group who hasn’t gone through the experience before pass their clearance tests. As nice as it would be to gloat from the sidelines, I think it would still be more fun to play along.