Dishonored is a very very important academic study for every professional and wannabe game developer who cares about game writing – which, in a perfect world, would be fucking all of them. Dishonored illustrates the vital role that dialogue plays in videogame story building. It does that by doing absolutely everything right in every aspect of storytelling except the dialogue, and with that single deficiency all that effort goes completely to waste.

The world building on display in Dishonored is actually really bloody impressive. You can tell that they sat down and worked out every aspect of this fictional universe. You can find maps of the entire world despite never actually leaving the one island nation (incidentally: fucking cocktease, Arkane), there’s a clear political and class system, current events like the plague are permeating every aspect of your surroundings, and everywhere you look there are written documents and detailed posters adding more and more background.

But even if you absolutely kill yourself putting those details together, the most it can do is put your in-game world on the same level as a ghost town. All that is merely evidence of stuff having happened in the past. The next step is to make your world feel like things are still happening in the present, that it’s a living breathing society full of individuals, and that’s where dialogue and character interaction comes in. The characters in Dishonored have faces and costumes that show a great deal of thought and care going into visual design, but when it’s time for dialogue they all turn into robots.

Part of it’s the performances. This is the risk you take when you hire big name screen actors for prestige points rather than career voice actors, because voice acting and film acting are subtly different disciplines. Yes, people like Nolan North and Robin Atkin Downes might be a bit overexposed in videogame voice circles but that’s because they know how to inject a bit of life into a performance. There’s a bit in Dishonored where you catch a bloke peeping on someone in the bath, but going from his line delivery you’d think he’d been caught underlining something one too many times in the accounts ledger. Then there’s visual performance, of course. Conversations between the player character and his allies tend to be held Oblivion-style with the characters maintaining fixed creepy eye contact.

But the dialogue writer doesn’t get let off, because even if you did get in the most professional jobbing voice actor on the books, the lines in Dishonored wouldn’t give them much to work with. Most of them read like the writer set out with precisely one goal in mind – to establish the next instruction or plot point or explanation of current events – and then they put pen to paper and stampeded straight for it like a fucking rhino on a sled. No asides, no ums or ers, no small talk, nothing that characterises actual human conversation.

The problem with a lot of game writing these days is that dialogue is used solely for exposition. Particularly in RPGs with dialog menus that consist only of going down the list raising topic after topic and listening to someone blithely read out encyclopaedia entries. Play a Lucasarts adventure game for a crash course in how to do dialogue trees. Half, perhaps even most of the lines don’t have the slightest expositional purpose, such as when exchanging woodchuck-related tongue twisters with the carpenter in Monkey Island 2 until one of you tells the other to shut up, but it accounts for a massive percentage of the appeal, humor and unique personality of the games. 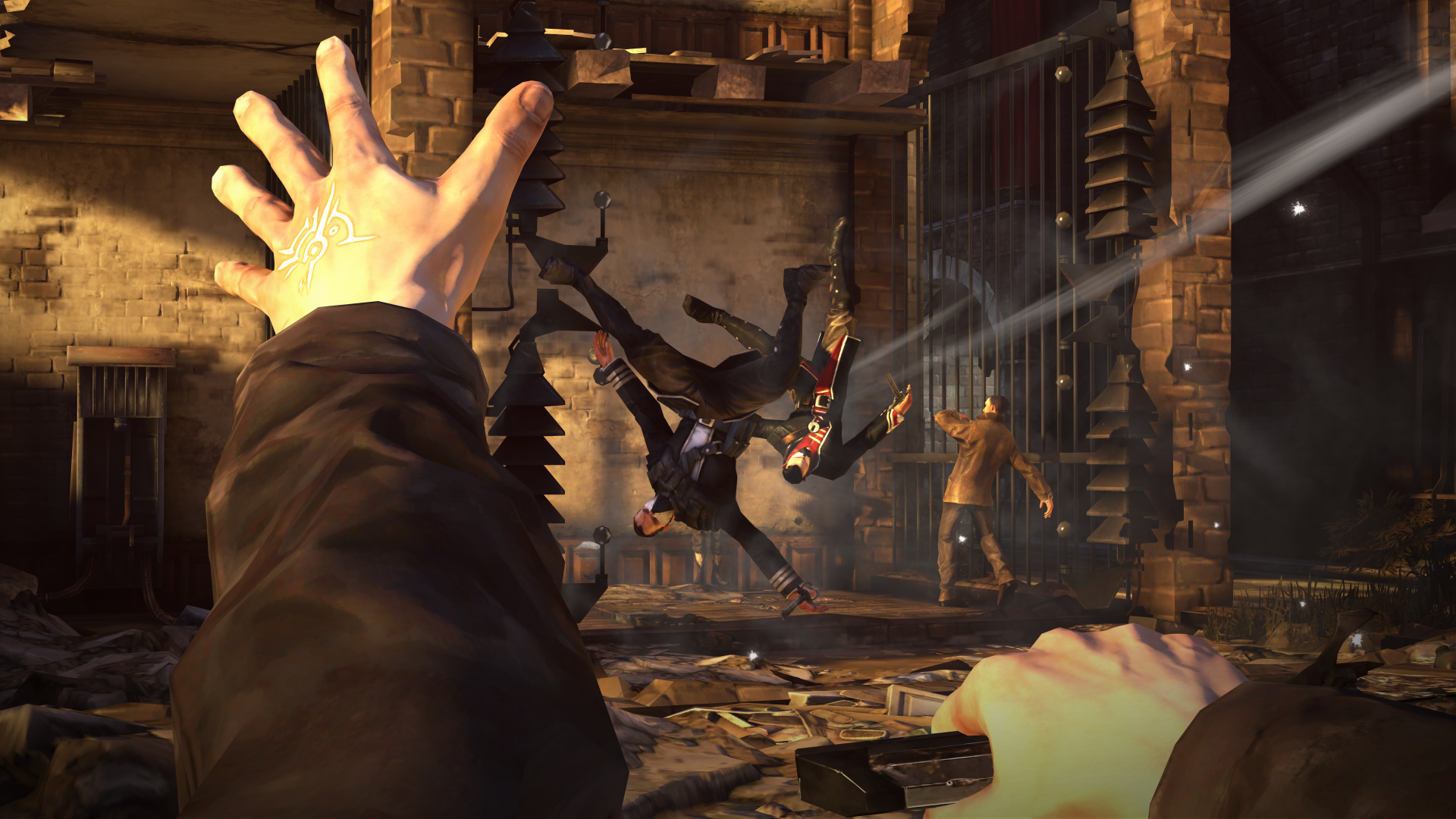 Let’s bring up Thief again, Dishonored‘s main influence. As I said in the video, a game about keeping quiet could justifiably have a silent protagonist, but Garrett’s in-game asides add a great deal without saying anything plot or gameplay vital. Even in the mission briefings, his personality comes through. Here’s the very first line of the briefing of Thief 2‘s first mission, in which Garrett helps a friend elope: “I’ve always equated ‘feelings’ with getting caught: they both get in the way of my money.” Sixteen words in and Garrett has ten million times the personality of the entire population of Dishonored. And it applies to the NPCs, too. None of them are as visually striking as Dishonored‘s random guards, but their flamboyant delivery and idle chatter genuinely endears them to you, organically motivating you to stick to non-lethal methods. Remember Benny the guard, Thief fans? Dishonored doesn’t have a Benny.

Your goal in writing a game story is to create characters that engage us, but don’t make the mistake of thinking that this rests solely on what the characters do, what they look like, what opinions they have, or the circumstances from which they arise. That’s all secondary. Telling us that new character X once took on an entire stagecoach full of armed lemurs doesn’t do shit for character building. Neither does actually showing them do it, on reflection. What matters is how human they are. They don’t even have to be human – see every Pixar film – just exhibit human characteristics, the most important of which is emotion. Emotion is the main thing that separates us from the animals and the supermarket self-checkout machines.

Niko Bellic from Grand Theft Auto 4, Withnail from Withnail & I, and Malcolm Tucker from The Thick Of It (which is incidentally my new favorite show). If you were judging these characters based only on an impartial description of their actions, we could easily hate them. But we just can’t when we see them in action, partly because they’re funny and partly because they’re all capable of expressing strong emotion, maybe in ways we wish we could, and they come across as more human for it. They rage and get melancholy, they might commit crimes or manipulate people but they also get flustered, and frustrated, and desperate. Malcolm Tucker only gets swearing angry because he cares about the party. And ultimately, strong emotion is just all about giving a shit.

It’s the characters that don’t seem to give a shit that I can’t stand, whether they’ve been assigned the status of hero or villain. Albert Wesker from Resident Evil didn’t let up the smug everything-is-under-control emotionless shithead act until about one nanosecond before his violent death, and that’s what made him such a grating cunt. And then there’s Rubi from Wet who never seemed to be the slightest bit threatened by anything but never seemed to be enjoying herself, either.

All of which is reason, if it were needed, to think very hard about having a silent protagonist in a story-driven game, because when a silent protagonist gets betrayed there’s no way of knowing if they’re angry about it or just glumly accepting. For all we know they could be turned on. The audience needs more to go on than just a spreading damp patch on the trousers.