Always give homage to the man behind the curtain. With an exponential rise in viewership, Game of Thrones debuted legendary cinematographer Robert McLachlan with one of the most brutally iconic episodes; followed by two Emmy nominated hours, and an awe-inspiring segment of the current season. In addition to working on recent shows, such as HBO’s Westworld, and Showtime’s Ray Donovan, McLachlan was able to take some time and share with us how he has been able to turn the page of A Song of Ice and Fire into a visual spectacle.

McLachlan’s debut to the show was arguably the most gut-wrenching episode to date; the Red Wedding. The iconic scene required a creative understanding of horror, to present a massacre that differentiated itself from previous scenes of brutality, in a series laden with tragic mayhem. The weight of this responsibility was not lost on him.

“Yeah that was a situation of very fantastic, “No pressure, buddy.” That was the scene that Benioff and Weiss, the two creators and head writers, had been looking forward to the most. And that episode, more than any other we had ever done, really had to be perfect. And the pressure to nail it on both myself and David Nutter, the director, was pretty enormous.” 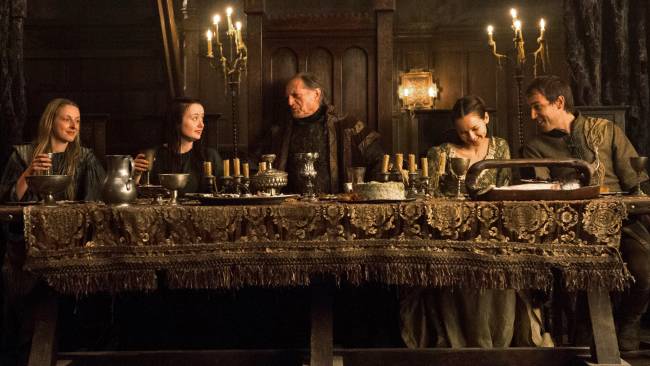 McLachlan rose to the challenge by putting his own special touch on the scene. Rather than having the usual ‘stark,’ cold lighting associated with the North, “It’s very bright, upright, and happy looking,” McLachlan explained, joking “By Game of Thrones standards, it’s almost a Disney movie.”. This is because he wanted the “very warm” candles and the torchlight to do most of the work. As the scene progresses, McLachlan uses the action to assist the lighting: “All the guests of the wedding pick up a whole bunch of those candle sticks and take them out of the room when they take[the bride and groom] for the bedding ceremony,” he explained, “I wanted it to get dark when all the shit happens, so as all the guests go out, they took the light with them.” Of course, the gruesome moments that follow dropped jaws and forced tears throughout the fandom.

McLachlan seemed to share in the emotional fallout from the pain he has inflicted on the globe, saying “We’ve actually had to deal with a lot of tears throughout the entire world,” going on to revel in the Red Wedding reaction videos as “deeply gratifying.”

Of course, the intensity of the fandom would not have developed without the extreme focus on detail. McLachlan explained the finer points of the meticulous nature with which he and his crew are able to integrate a fantasy world into the one we know. A prime example of this was the preparation it took to film the fighting pit scene in The Dance with Dragons episode. “We scouted the location the previous June and I used an App that tells me exactly where the sun is gonna be that exact day we are gonna be filming months later. And we used those to determine what shot from each sequence we were gonna do at what time of day.” The choreography of a battle was – quite literally – laid in accordance with the stars.

The fighting pit is an epic scene for myriad fighting styles, but most notably our queen riding Drogon. McLachlan explained the encumbered movements of the first dragon ride through a detailed lense, “There was a school of thought conceptually that in Dance With Dragons, she had never ridden a dragon before. And the dragon was supposed to be having a hard time taking off with her on it because it was wounded.” This is juxtaposed by the fluid motion he captured in Spoils of War where “we were given a template of ‘ok this time the dragon is the size of a 747 so obviously the dragon is no longer struggling carrying this little girl around.'”

The ‘loot train’ battle in the recent Spoils of War episode became one of the greatest spectacles ever shown on television, by simultaneously immolating 20 men for a single shot. “Yeah twenty doesn’t sound like that many, but when you consider that they have to be gelled up with protective gel and this stuff that’s gonna catch fire on top of that, and then get it into these fire retardant suits that race car drivers use. So, if you take wardrobe and makeup into account, it takes about a 100 people to burn 20 people for 15 seconds.” 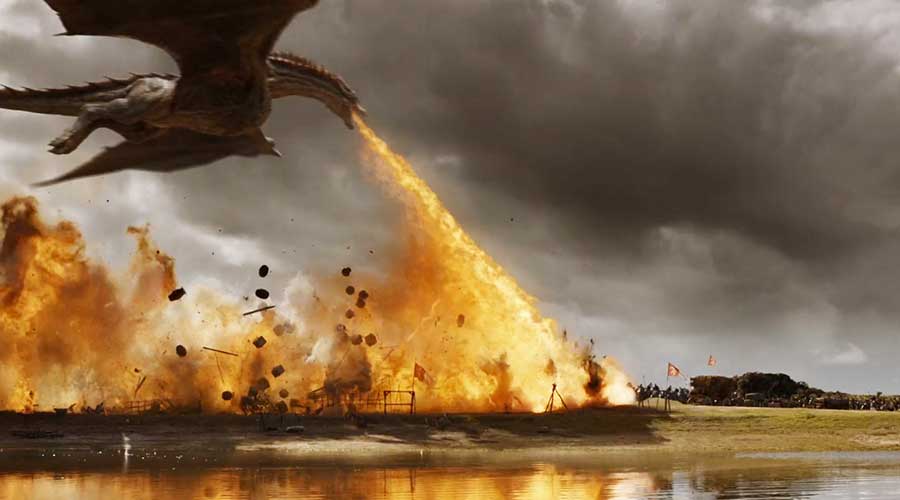 The complications of filming a scene of this scope does not end with charring flesh. There are detonation crews that have to plan explosions with standards of safety, metal carts that can be burned for multiple shots, not to mention hundreds of extras that need makeup application for each take. “We used every single camera conveyance known to man, and not a single one of them was superfluous for the sake of using them,” he said, “we needed them because there’s been months of discussion about what was gonna be the best way to get this shot as good as possible, and that’s why this sequence is so frickin budgeted down to the second.”

Livestock is generally something that all filmmakers shudder to think about, so it’s no wonder that working with live dragons will be as difficult. He explained, “It’s like watching an early video game, it’s a very crude animated version with all the cuts of the sequence.” Aside from the challenges of working with fire breathing, flying serpents of death, the set may look placid to the casual observer, but McLachlan told otherwise, “Everyone is always waiting for their moment of ‘frantic’ with getting their cameras ready, or getting the make up ready, or, getting the helmets on the Lannisters, or getting the horses in place, or getting the smoke ready to go. There wouldn’t look like too much is happening, except for brief moments of extreme violence.”

Despite the wild critical success of the episodes he filmed, Robert McLachlan will not be returning for season eight. “I’ve spent half of the last five years there and that’s just too much time away from home. I’m gonna happily rest on my laurels and let someone else do the last six episodes.”

McLachlan defined a cinematographer as a “writer of light: controlling, layering, and using light to expose an image in a way that is going to help you tell a story.” He helps us grasp the fantastic, and makes tangible the worlds of imagination. And though his watch has ended, the images he has seared into our cultural conscious will forever exploit and exalt the power of the game.

5 Action Movies with “The Last” In Their Titles