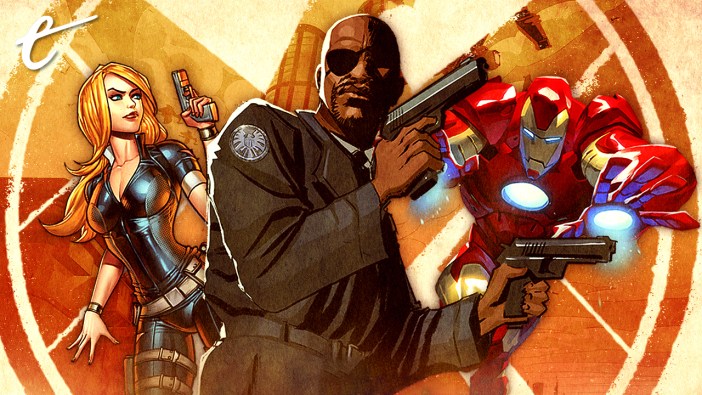 Game design analysis has been a long-standing obsession of mine. I can’t play a game without dissecting how it works (or doesn’t). Many years ago, JM8 and I of the Anatomy series studied game design at university together, and I’ve worked behind the scenes on that series helping J write his videos. I’ve worked as both a game developer and designer professionally, and even though I have every creative outlet I could want, I still wake up and fall asleep with big and increasingly deranged ideas about game design.

So now The Escapist has given me the opportunity to share my incoherent ramblings directly with you, in a new column focused on game design analysis. I’ll be pulling back the curtain a bit on a relatively young and exciting industry, with a focus on my own experiences while playing a game and widening a bit to more objectively analyze those experiences.

Extrinsic rewards change our perspective on things. As designers, we have to be aware of the effect these rewards have on players, and in some more insidious cases — it can be used to our advantage.

A lot of folks at The Escapist have been playing Marvel Snap since its launch in October, including those who hadn’t gotten into the genre before. As a long-time veteran of CCGs, I had to take a look. There are some interesting aspects to its design. The simplicity of the game, using only 12-card decks with relatively basic powers, allows it to serve as a genre onboard.

Despite the simplicity, Marvel Snap has a surprising amount of depth. The randomized effects of the game’s three areas where cards are placed give those cards a new context. Sometimes I didn’t even feel like I was playing against my opponent, but playing a more PvE game against the areas, trying to maximize the effectiveness of my cards and plan around the unrevealed effects that might ruin my strategy.

It’s no surprise that there are some great design decisions at play here, with Ben Brode, the long-time game director of Hearthstone, running the show. However, there are some inevitable problems with Marvel Snap as a free-to-play mobile game, and they’re not what you’d expect. 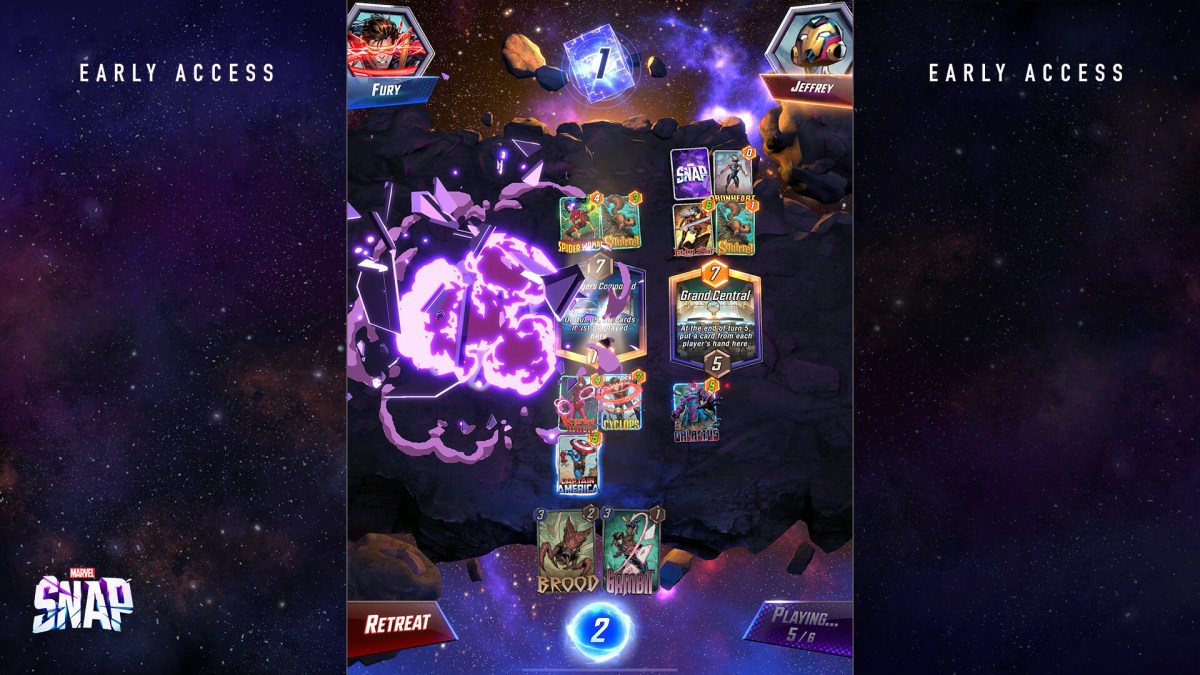 A Series of Unfortunate Observations

It’s possible that my rich experience with the genre comes into play here, but something stood out to me after my time with it — people are really bad at Marvel Snap. I saw some unbelievably dumb plays being made, like a 1-power card being played on an area that says “Cards here have -3 power.” Doing nothing would have been a better decision than that.

After noticing this happen frequently, I started to pay attention to the names of my opponents. They were strangely… normal. Nothing noticeably on-brand for the Marvel aesthetics of the game, but still not what I’ve come to expect. Many games, mobile games in particular, will silently match you against bots to ease you into the game and to artificially inflate your win rate. I expect that’s what’s happening here, though I can’t prove it.

Another thing I noticed in my first few days of play was how generous the game was with progression. Unlike many other examples in the genre, Marvel Snap doesn’t offer randomized booster packs. Instead, new cards are awarded as part of a “collection” path, which is progressed by upgrading the appearance of your cards. That’s a cool idea. Often, unlocking cooler art and borders for your cards is an alternative way of spending currency and something newer players wouldn’t dream of wasting their money on while their collection is lacking.

I was doing these upgrades more or less every single game, win or lose, and as such my collection of cards was growing quickly. Upgrading the cards requires some card-specific points that seem to be allocated randomly after each game, along with some Credits, the game’s primary currency. Although, the amount of Credits used seemed negligible compared to the chunk I had started the game with. 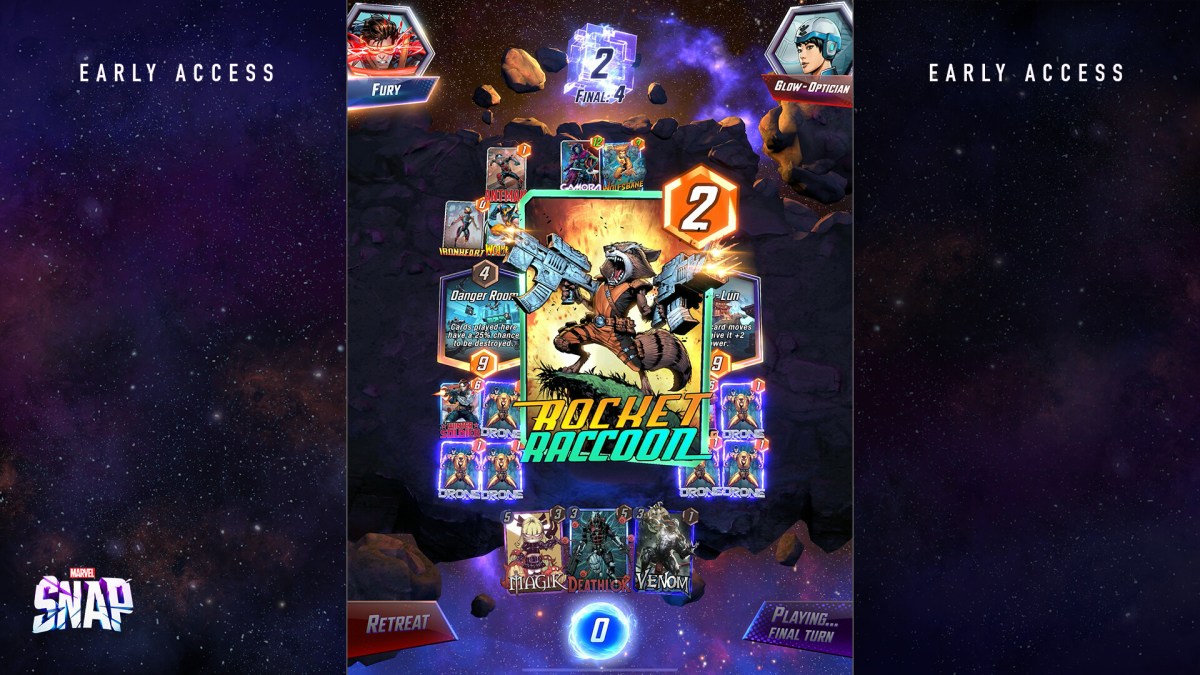 Where Are All the Lootboxes in Marvel Snap?

The choice to give cards along such a progression path instead of in packs is a surprising thing for a free-to-play mobile CCG. It’s not quite on the same level of fairness and transparency as Legends of Runeterra, which refuses to sell anything for real money other than Wildcards — which can be redeemed for any card you choose — but still better than the likes of Hearthstone and Magic: The Gathering Arena. The in-game shop mostly sells unique card styles and Credits, which I didn’t feel I was lacking.

The lootbox-style microtransactions in other games in the genre are mostly designed to exploit the psychological effects of gambling on the brain. Marvel Snap, on the other hand, limits the gambler’s rush to the titular Snap mechanic. This is where either player can choose at any point during a match to double down on the reward for winning that match — but also risk double the punishment for losing. This mechanic is a little bit problematic to include in a game whose user base inevitably skews younger, but it could be worse.

That’s all pretty positive, and had the experience continued that way, I would be recommending Marvel Snap wholeheartedly to anyone I wanted to introduce to the CCG genre. Genre-onboarding is an important thing for games. Some genres are notoriously difficult to get into for new players, and it’s fantastic to be able to point to a game that reduces the complexity while staying true to the core ideas and mechanics of the genre.

However, about 40 hours into the game — not an insubstantial amount of time for a mobile game — the other shoe finally dropped. 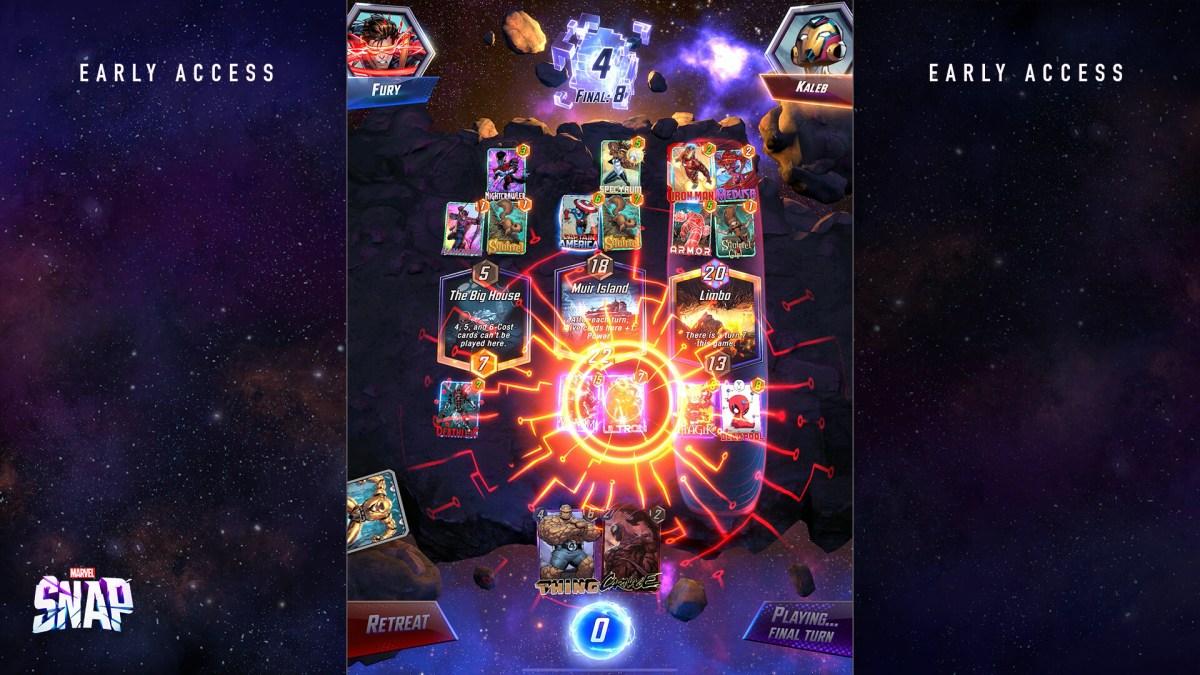 Fun Is Not the Goal

The sunk-cost fallacy says that we’re predisposed to keep investing once we’ve already invested an amount of money or time into something, even if the odds of a return on it are clearly low. A cynic might suggest that Marvel Snap’s generous progression, potential use of bots to inflate win rates, and the incorporation of a gambler’s rush into core mechanics are an attempt to keep you playing long enough to reach a feeling of sunk cost with your time investment.

Almost simultaneously — after 40 hours of investment into the game so far — I ran out of Credits, ran out of dailies and battle pass missions to get more Credits, and started to match against opponents who would absolutely destroy me with cards I didn’t own and had never seen before. I was losing regularly and had nothing to show for those losses, since without Credits to upgrade cards, I had no hope of improving my deck any further.

I started playing Magic: The Gathering Arena recently, after visiting home in the UK and playing a lot of it in person with JM8. An odd thing I noticed about it is that, once I had used up the daily missions and per-match rewards, I didn’t feel like playing anymore. Despite the fact that I enjoy Magic for its own sake, and the rewards themselves were of little consequence to me once I had a few decks I liked playing that I felt were optimal, it still felt a little pointless and disappointing to win a game and get nothing for it. 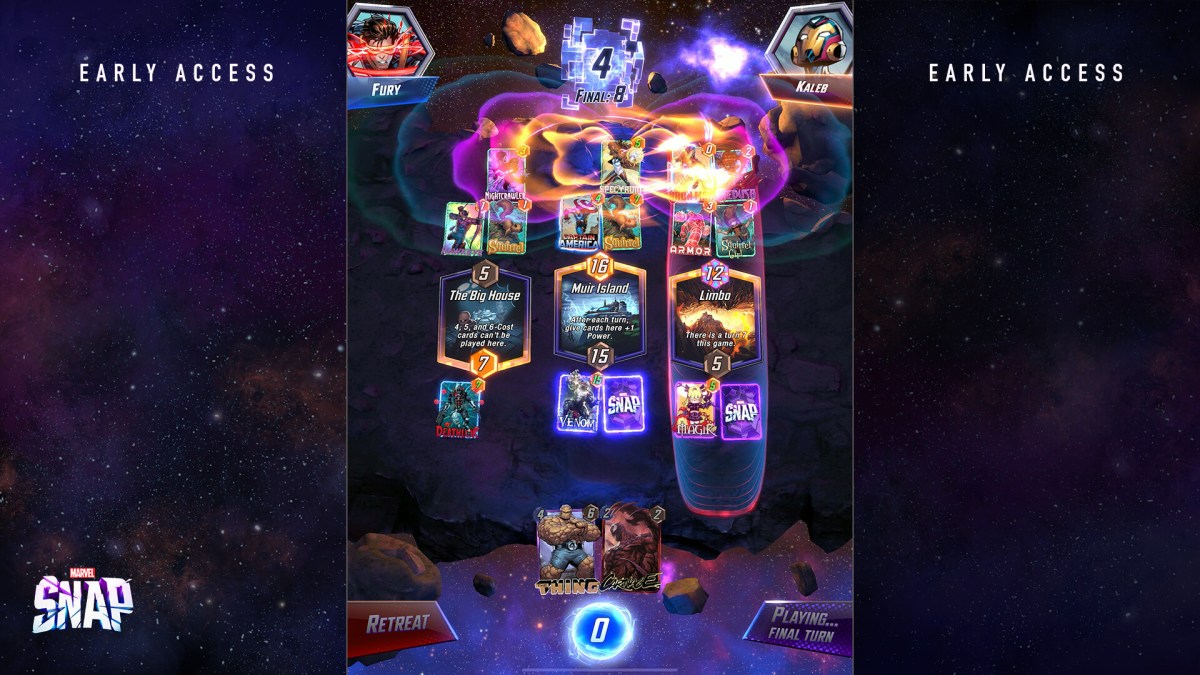 This phenomenon has recently been given a name: “manufactured discontent,” coined by Dan Olson from the YouTube channel Folding Ideas. Aside from keeping the player around long enough to reach a sunk-cost time investment, the dopamine bombardment aimed at you for those first 40 hours of Marvel Snap sets a baseline expectation in your brain of how rewarding the activity of playing the game should be — and then it abandons it, leaving you itching for a hit of progression.

In other words, the design aims to create a problem and sell you the solution for it.

Sometimes the system of rewards and incentives we call capitalism causes a rift between the goals of a business and the goals of consumers and artists. In this case, it is suboptimal to make a game too fun; otherwise, players won’t pay for contentment. This design principle permeates almost every game with a free-to-play model.

Whether the things you pay for are content, power, or cosmetics, games are designed to purposely make you miserable for not having bought them, while making it as difficult as possible to just stop playing. Despite the way it may look on paper, Marvel Snap is no exception.