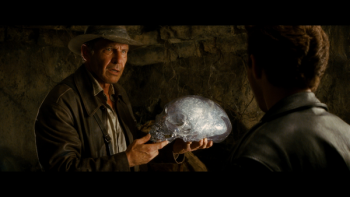 Aliens. Why’d it have to be aliens?

In some news that may be concerning to die-hard Indy fans who were already having reservations about a new Indiana Jones movie, The Hollywood Reporter has confirmed that David Koepp, co-writer for Indiana Jones and The Kingdom of The Crystal Skull has been signed on to pen the new movie.

Yes. We all know that Crystal Skull sucked, and didn’t make a lot of sense, but to Koepp’s credit, he also wrote the script for a lot of great movies, like Jurassic Park, Mission: Impossible, and the very first Tobey Maguire Spider-Man movie.

Actual plot details are very scarce at this stage – we don’t know if this movie will take off where Crystal Skull left off, or, considering Harrison Ford’s advanced age, will be a flashback set in a classic Jones time period, bookended by ford as “old Jones”.

In some good news, it looks like Indiana Jones co-creator George Lucas, who wrote treatments for Crystal Skull, will be very hands-off for Indy Jones 5.