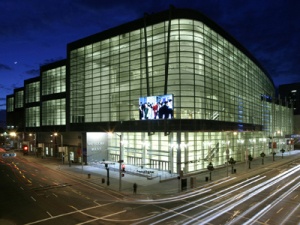 The train ride to SFO from GDC, which two years ago replaced the cab or fragrant car rental from San Jose, is a singular existential experience. The roar of metal track, the whine and low moan of compressed tunnel air, are apocalyptic if your eyes are closed. The gentle press of momentum is magical; after a week of explosive energy expenditure, you are expending nothing – and yet you are moving, speeding toward your destination, smooth and fast with the cacophony of the tunnel hammering you on.

The transport is not the only thing that’s changed. Previously this trip was a lone endeavor, a hero’s journey; after endless days amongst the tribe, you were alone among aliens, your language foreign, your passions inconceivable. Reality folded its obscure hands around you at last.

Not so anymore. The planes and trains are the last sputtering flames of GDC. Solitude is replaced by the industry without its pulse and glitter; instead of Sid Meier dropping subtle pearls, there’s the guy behind you talking far too loudly about what made The Sims Online fail for someone actually in possession of a clue. These last sallow bursts seek strangely to prolong what cannot be prolonged, and show the current generation of the industry for what it is, good and bad alike.

It’s a time for reflection. So in the spirit of this student-oriented series, these are the things I’ve learned that you won’t hear from an industry press release.

This is my advice. It’s from my small experience. I may or may not know what the hell I’m talking about. But it’s what I know. The most valuable insights I have gained from working in this business have come from the anecdotal experiences of others, the spikes in the culture that so many of us have a love-hate relationship with.

The thing that we all have to answer at the end of the day, the question that strikes us more poignantly than many occupations, is this: is it worth it?

I still think it is. Sure, at the end of the day, we just make games, and should never deceive ourselves into thinking otherwise. But this doesn’t change the fact that nothing else in the world sweeps aside our differences to bare our shared humanity like the core amazing human cognitive processes that drive us to play. Sometimes the industry will seem entirely exasperating; it gets too big for itself, people get too deep into it, and collectively we are constantly overestimated in all the wrong ways and underestimated in the right ones. But if you’re drawn to it, if it is the instrument for your voice, the game itself remains worth it.