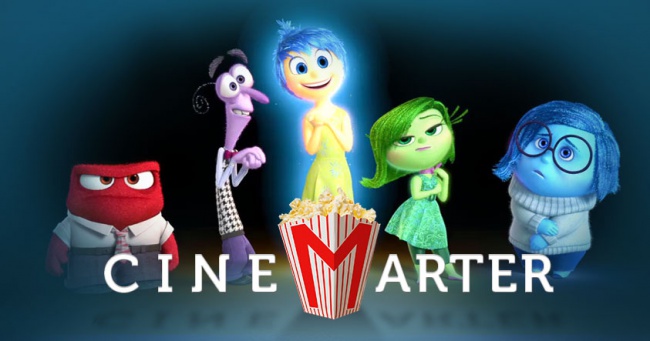 Maybe it’s because we haven’t had a truly great Pixar film in half a decade, but it feels far too easy to forget just how good the animation studio can be when it’s “on.” The likes of Ratatouille, Up, and the Toy Story trilogy rank right up there on the list of “best animated movies ever,” and that’s not even counting great films like Monsters, Inc. or Finding Nemo – or The Incredibles, if I’m feeling generous. While its more recent entries haven’t quite lived up to those heights, with Inside Out we see Pixar return to form and deliver a movie that rivals any of its previous outings. It may not be the best film that studio has released, but it’s very much in the conversation.

With perhaps the most creative idea in the Pixar œuvre, Inside Out takes place primarily inside the mind of 11-year-old Riley (voice of Kaitlyn Dias), as her anthropomorphized emotions – Joy, Sadness, Fear, Anger, and Disgust – essentially control the way that she responds to external stimuli. The goal of all the emotions is to keep Riley happy, and they’re led by Joy (Amy Poehler) in this task. But after Riley moves away from her Minnesotan home to San Francisco, and Joy and Sadness find themselves away from the emotion headquarters, things start to go wrong both for the emotions and for Riley. 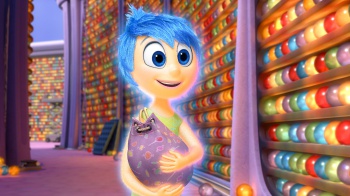 How’s that for an intriguing premise? Joy and Sadness (Phyllis Smith) have to go through their own little adventure movie in order to get back to HQ, Riley suffers through the trials and tribulations of being an emotionally unbalanced pre-teen – but not in an insufferably annoying way, like it could easily have become – and the other emotions provide much of the humor as they try to stabilize Riley but fail at seemingly every turn.

It could be jarring to continually move back and forth between these three groups. It’s not, in large part because there always feels like a connection between the events that happen at each turn. The emotions at HQ make a decision, it plays out in the real world, and then the area that Joy and Sadness are exploring starts to crumble, for example. Each jump between characters is purposeful and gets the audience more engaged in the utter chaos that is happening. Inside Out does, at times, risk having too much going on, but it stays on the rails and never becomes overwhelming.

If you’re not up for an intellectual challenge, Inside Out may not be the movie for you. Oh, you’ll have a good time just watching these characters do their things, and it’s certainly funny enough that you won’t feel like you wasted your time, but this is an intelligent movie – one that you’ll have to think about throughout as it uses its premise and central metaphor to make points about how humans think and act. It’s narratively complex enough for adults to take a lot from it, but simple enough that children will enjoy it, too. It’s the perfect example of a “family” film – something where any potential audience member, regardless of age, can benefit from watching it.

It’s the perfect example of a “family” film – something where any potential audience member, regardless of age, can benefit from watching it.

In addition, Inside Out has the best world-building we’ve seen since John Wick, contains as much visual creativity as The Lego Movie, is hilarious from start to finish, is gorgeously animated, and, perhaps appropriately, is an emotionally compelling tale. You may hear some sniffling if you see Inside Out at the cinema, and it’ll likely be coming from the adults in the crowd – particularly those who have children of their own.

There are so many moments of brilliance to be found within Inside Out. One could probably compile a top 10 list of small moments that don’t even impact on the plot – simple comments that are both hilarious and poignant, or perhaps an action that happens in the background that adds to the setting or the aforementioned world-building. There’s a small quip about facts and opinions, for example, that is hysterical, and it just randomly happens, takes up less than ten seconds of time, and then we move on.

Animated films often get the biggest actors possible to voice their characters so that we’ll ignore their problems and just focus on it being so cool that Angelina Jolie is voicing a tiger! Pixar sometimes gets big names, but they always fit the characters. The biggest name in the film might be Amy Poehler, here giving Joy such an enthusiasm that you can’t help but root for her. Phyllis Smith plays Sadness about as well as you’d expect – which means she did it really well. Bill Hader fits Fear, Lewis Black is hilarious as Anger, and Mindy Kaling brings attitude to Disgust. Each of the actors fits their character perfectly – after seeing the film, it’s hard to imagine anyone else playing them.

When the phrase “one of Pixar’s best” gets uttered, you know you’re looking at a pretty special movie. Inside Out is, indeed, pretty special. It’s an original, interesting, funny, and often heartbreaking movie that looks into the mind of an 11-year-old, and does so with so much chaos and sophistication that it probably shouldn’t even work – and yet it does, and it does so with such imagination and beauty that fills every frame. This is what a family movie should look like.

Bottom Line: Endlessly imaginative and entertaining, Inside Out is Pixar’s best movie in a while, and possibly the studio’s best film to-date.

Recommendation: Everyone should see Inside Out.