Last week saw the culmination of about half a year’s work with the release of Hatfall, the mobile and browser game based on Zero Punctuation. I say ‘half a year’s work’, most of my work was done in the first few months (I prototyped the core gameplay over my last Christmas break). A lot of the rest of it was Addicting Games dotting the I’s and crossing the T’s, organizing the testing and porting to mobile. If you haven’t played it yet, please do, I happen to think it turned out alright.

When Defy Media and Addicting Games first bounced the idea to do a ZP game off me, I kind of blew them off at first. I remembered, a few years into Zero Punctuation, we held a contest for members of the public to develop little games based on Zero Punctuation, and that rather illustrated the difficulty of such a task. ZP doesn’t really have a story or a world in which it takes place that a game adaptation can explore; it just talks about whatever game’s come up this week. It’s got iconic imagery, yes, but then you might as well make any game at all, slap the imagery onto the characters and add a yellow background. 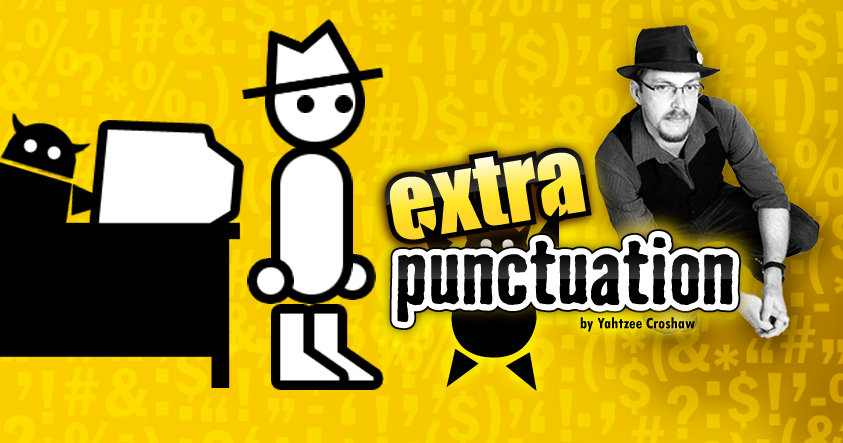 What I most certainly did not want to make was the game in which Yahtzee is sucked inside his computer and must fight off all the video games he’s reviewed with his magic criticism gun. In other words, I didn’t want to make the Angry Video Game Nerd Game. With all due respect to my internet video contemporaries, that shit smacks a little too much of how they used to do film and TV adaptations in the 8-bit and 16-bit eras, just slapping likeness rights onto generic platformers.

No, my feeling was that an adaptation needs to capture the spirit of the original work, and I couldn’t immediately see how to do that. But then the thought stuck with me like an ear worm, and after a while, I remembered a concept game I’d considered making some time ago. In it, you would control a stick figure as they avoided objects falling from above, and as the game went on, more stick figures would be added that looked identical to you, but moved randomly around, so that eventually the gameplay would be about deducing which on-screen character is the one being consistently controlled by you.

So I dredged that idea back up and realized it would make for more challenging and frantic gameplay if you were trying to get your character under a specific object, rather than trying to avoid them all. And as I started thinking in terms of Zero Punctuation, it all kinda fell into place. Obviously, you would be catching a hat. The hat is the only thing that differentiates the Yahtzee avatar from generic ZP characters. It made so much sense that I felt I had no choice but to develop the game immediately.

The important thing for me was to maintain the ‘feel’ of a ZP video without having to rely on referential in-jokes. So I asked myself what the essence of ZP is, disregarding iconography and the whole ‘reviewing a game’ aspect. In short, it’s minimalist, fast-paced, and serves as my outlet for stream-of-consciousness non-sequitur humor. Basing the game around a single, simple core mechanic of catching hats ticked the minimalist box.

For the pace, it was important that the game have rhythm. All the movement had to be quick and cracked off in a regular sequence, marked with punchy audio cues. Two pieces of text appear with noisy clangs to count us into the level – a sort of “2, 1, Go” before the actual hat countdown starts, as well as an opportunity for some silly text – then the falling hat only appears on screen for a single frame, heavily motion blurred, before hitting either the player or the ground with an abrupt thud. This is enhanced with some appropriately up-tempo – and royalty-free – music.

Inevitably, a number of issues came up in testing. Originally the game area had solid invisible walls on the left and right of the screen, until I realized that it was quite easy to deduce the player character by repeatedly running all the way into a wall, pausing, then pressing the opposite direction and seeing who moved first. So I removed the walls and added wraparound, which made things just that vital bit more visually confusing. The size and shrink speed of the ‘fakeout’ shadows representing falling heavy objects had to be tweaked quite a bit.

The wizard was added to throw curveballs at players who start to get the hang of things, but right up until the final release, the wizard would curse you for three levels, rather than just one. It was only at the last minute I realized that even I was having trouble getting through three cursed levels, and it was kind of killing the all-important pace. Something I’ve learned in solo game development: if it’s too hard for you, the creator, it’s going to be three times as hard for someone who doesn’t have your innate familiarity with the mechanics.

So we’ve got the imagery, the minimalism and the pace, but what about that stream-of-consciousness non-sequitur humor? That was the intention behind the various things that happen surrounding the ‘gifts’. I take inspiration from games like Frog Fractions and Cookie Clicker in that I essentially wanted to extract comedy from blatantly trolling the player. But I particularly wanted that Frog Fractions element where the gameplay unexpectedly takes left-turns, and part of the humor stems from disbelief that the non-sequitur goes on as long as it does. That sort of joke is only 100% effective once, though, so I made sure to include plenty of variant text, so that people could find them over and over again and see new jokes.

I should probably clarify, because some people were confused on this point; yes, I did make the game, I designed it, wrote the text, did the graphics and programmed it all up in Game Maker before sending the build to Addicting Games to be ported and have the technical elements jiggered about for maximum efficiency. Some people were surprised that I’d make a browser/tablet game when I mainly review core games and develop indie horror games (in fact, my latest one The Consuming Shadow should be out in digital stores before too long). Well, the answer to that is, I take an interest in a wide spectrum of gaming, and I avoid stupid arguments about which platform is ‘the best’ because it depends what you’re trying to do. In this case, browser/mobile was the best route for the kind of things we wanted to achieve with Hatfall.

Everything has its strengths and weaknesses. The strength of the browser game, for example, is that after you’ve finished reading this you can click one link, play it straight away, and instantly draw your own conclusion as to whether or not I’m full of wank.

Ladies and Gentlemen, We Have Finally Reached Pluto

When the Sequel Is Worse Than the Original