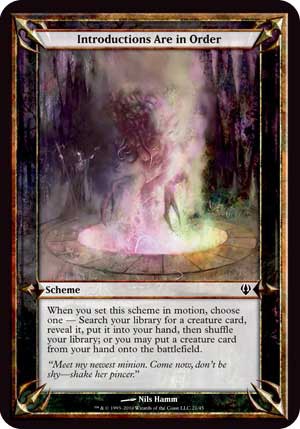 December 3rd, 2011. That’s the date. My first Magic: the Gathering tournament. Durham, NC may not be a big hub for Magic, but I’m nervous all the same. I’m piloting Blue/Black Control, a deck that’s underperforming in Standard, so I’m keeping my expectations low. Even so, I trust it will be a good time!

You might well be wondering what positions me as an expert – a purveyor, if you will – of Magic knowledge and wisdom. Nothing, really, except a long history with the game. I purchased my first booster packs in 1994 with the release of Fallen Empires when The Dark was on its way out. My first starter deck was from Ice Age, having given 4th Edition a miss. This is where I got hooked. The first deck I played against anyone outside of my family was a Green/Red Burn deck, which utilized Orcish Lumberjacks and mana elves to produce gigantic Lava Burst effects. It didn’t win many games, but it was enough to hook me on the Mana Ramp deck style for years to come. I played at school with friends, on the weekends at home, and wherever I could find a match for the next few years. I bought into Homelands with every penny of my allowance, desperately searching for Baron Sengir, which I eventually got and then lost to a friend while playing for Ante . This used to be in the rules!

By the time Stronghold came out in 1998, I was on an extended vacation from Magic. I had only a cursory interest in the game for several years from that point, eventually being drawn back into it by Kross with Shards of Alara in 2008. We bought some Conflux, too, but I wasn’t all-in at this point. It wasn’t until Rise of the Eldrazi came out that I got hooked again. Something about the Annihilator mechanic, which forces players to sacrifice permanents when you attack, really drew me in, and I retroactively bought into Zendikar and Worldwake to build Standard decks to play around the office. With this I was back. All the way. No second guessing.

So now here I am, 17 years since my first booster pack, Zendikar block has cycled out of Standard with the release of Innistrad, and my favorite mechanic ever printed is out of reach for the tournament. Now I’m competing this weekend with an underperforming deck (Blue/Black Control had a 36 percent win rate at Worlds) with little hope of winning. Why? Because I love it. And that brings me back to the beginning. What’s this Blue/Black Control deck I’m planning to bring to the tournament? You can check out the deck here.

So why is it underperforming? At present, Combo is practically non-existent in Standard, for the simple reason that there are no real combo decks to work with. As such, Aggro and Control have been duking it out for dominance. The Rock-Paper-Scissors phenomenon with the three basic archetypes, however, says that Aggro is Rock to Control’s Scissors. That means Aggro wins. As the tournaments have progressed, we’ve seen more and more Aggro coming to the field and less Control. As per the Top 8 of Worlds, all were a type of Aggro. All. This doesn’t leave much room for the ‘beats Combo’ Control decks in competitive Standard.

Not sure what that means? No worries! It will all make sense next week when we discuss The Metagame!

Whether you are completely unfamiliar with the game of Magic, a long time player who found some nostalgia at the very mention of Ice Age, or a competitive player looking for another perspective on the game, I trust that you’ll find something to take from these articles going forward. I’ll be looking at things from the vantage point of someone with experience with the game itself, rather than the competitive scene. I’m hardly the best rules lawyer around, but I’ll do in a pinch. I won’t claim to be the best deckbuilder you’ve met, but I can give a few pointers to Novice and Master alike. Here I’ll be looking to broach Intermediate subjects at a Beginner’s level and explore some of the finer points for the more experienced crowd. Perhaps I’ll even help some newcomers make the transition to hardcore players!

So that’s me. What about you? Have you been playing for years, are you just getting started, or have you never built a deck in your life? Do you play in Tournaments or just at the kitchen table? Be sure to let me know in the comments below.