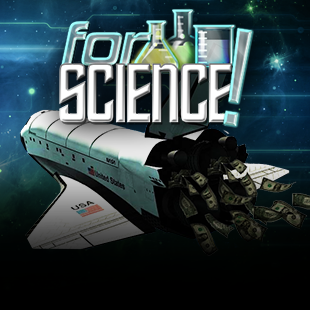 A recent report from the U.S. National Research Council found that the public does not consider investing money in the space program a priority. This poses a problem for NASA, which, with its current level of funding, will never be able to undertake a massive endeavor like a manned mission to Mars.

Public apathy toward NASA, a lack of understanding of the benefits of a space program, and more pressing matters all lead people to ask: is NASA worth funding at all? Couldn’t that money be better spent working on the economy, homelessness, or the housing market?

A key misconception among Americans is the amount of government money that goes to the space program. Just how much funding does NASA receive, relative to other governmental departments? Probably not as much as you think. 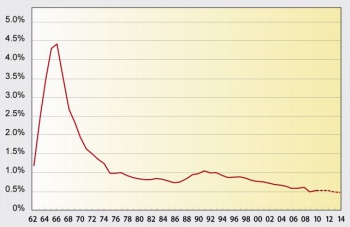 Image Source: NASA budget as percentage of federal total, from 1962 to 2014

For the past few years, NASA’s budget has accounted for roughly 0.5% of the total U.S. federal budget. 1966 marked the height of NASA’s funding, when it received 4.41% of the total budget – nine times the relative budget it receives currently. In fact, 1963-1969 were the only years in history that NASA received over 2% of the total budget. And what was it able to accomplish with that level of funding? Oh, just a little historic event like landing a man on the moon.

But maybe you don’t want your hard-earned tax dollars being put towards space shenanigans. Maybe you resent the fact that roughly $10 – yes, a whopping $10 – of your annual personal income tax goes to fund NASA. We have bigger problems to solve here on Earth; why allocate money to space exploration? What has NASA ever done for you?

I’m so glad you asked.

Research and development either led by NASA or effectuated through partnerships with NASA have led to inventions that have found everyday, practical use in our lives.

Those cordless tools in your cabinet? They evolved from technology developed from the Apollo lunar landing program. That ear thermometer that saves you an awkward rectal exam? Developed from the application of 30 years of experience in remote measurement of the temperatures of stars and planets. How long do your tires last? You can attribute 10,000 miles of their tread life to tire technology developed for Mars rovers. Enjoy sleeping on that memory foam mattress? Developed from technology designed to improve crash protection for airplane passengers. Glad you didn’t have to wear those hideous chain-link dental braces? The transparent material in invisible braces was developed for military tracking purposes. Enjoy jogging with your athletic shoes? Those insoles derived from technology in moon boots designed for shock absorption. Wear glasses? They’re scratch-resistant thanks to synthetic diamond coatings developed for aerospace systems.

The list goes on: high capacity batteries, advances in the aerodynamics of vehicles, UV filters for glasses, cloud technology, satellite television, Google Earth imagery, breast cancer detection… NASA has had a hand in all of these things – and more.

The fact is that NASA has filed thousands of patents with the U.S. government, and technology either spun-off from NASA or directly developed by the program is all around us. Some of the greatest discoveries and inventions in human history were not a result of direct development, but rather were incidental to the development of other technologies and ideas. Funding a space program isn’t just funding the construction of spaceships – it’s funding invention itself.

But maybe you didn’t need to be reminded of the tangible examples of the application of NASA science to our daily lives. Maybe you were already sold on the idea of space exploration, because you can appreciate the far-reaching benefits that may not be obvious to everyone.

By funding a space program, we inspire the next generation to enter the fields of science and engineering. We show the world that we are a progressive, forward-thinking people seeking the betterment of the human race. We further our understanding of the universe we inhabit. We continue the proud human tradition of exploration, the eternal zeitgeist fueled by unbridled ambition that has pushed our civilization to achieve things once thought impossible. We pave a path among the stars for the eventual expansion of humanity into a universe whose mysteries we will conquer, one eureka at a time.

So why should we fund the space program? Ultimately, it all boils down to one reason.