DmC: Devil May Cry: Definitive Edition releases today on PS4 and Xbox One, and like most remasters, it comes with a visual upgrade, a couple of new features, all of the DLC, and a $40 price point for what is now a two-year-old game that could be found for less than $20.

Which begs the question: Is it worth it?

In order to answer that all important question, let’s break down the Definitive Edition of DmC and see just what apparently makes it so “definitive.”

The fact that DmC didn’t run at 60 FPS on the Xbox 360 and PS3 was a huge deal to longtime fans of the series, especially considering that the original Devil May Cry ran at 60 FPS and basically set the gold standard for the genre.

As one would imagine, that particular issue has been mostly rectified in the Definitive Edition. As Capcom producer, Rey Jimenez has said in interviews, the game is not locked at 60 FPS, but it runs pretty reliably at 60 FPS and when it does dip, it’s barely noticeable. In fact, I didn’t notice it at all until I ended up making the above video and put the footage side by side with the PC version.

Similarly, the overall look of the game isn’t all that noticeably different as well. While the game looks unquestionably better on the Xbox One than the Xbox 360, it’s hardly a dramatic improvement, and its even less of a step up over the PC version.

In the end, if you’re looking to jump into the Definitive Edition, it shouldn’t be because of any sort of graphical reason. The game looks good on all platforms and if you’re just looking to play the game at 60 FPS, you might want to just stick with the PC version if you can find it at a discount.

On the gameplay side of things, the comparison actually gets more interesting. Exclusive to the Definitive Edition of DmC is a modifier known as “Hardcore Mode,” which addresses one of the most common complaints about DmC – The style system.

In prior Devil May Cry games, pulling off combos and chaining them together in stylish ways in order to increase your style ranking to S and beyond was immensely satisfying because it was difficult to do. It was a way to encourage players to not just stick with the same combos and try to add a little bit of flair to their gameplay.

DmC missed the mark by implementing a style system that practically gave out SSS ranks like candy. It was a system focused more on how much damage you were doing, rather than on how stylish you were being, and as such, it was extremely easy to game. To make matters worse, once you got to an S or higher rank, you actually couldn’t lose it unless you got hit or the battle ended.

The Definitive Edition right out of the gate fixes that last issue. Your rank will always degrade if you’re inactive or if you’re using the same moves over and over again, regardless of what mode or modifiers you’re playing with. So you constantly need to keep attacking, mix up your moves, and not get hit if you want to maintain a high rank.

Hardcore mode simply makes the requirements for getting and maintaining high style ranks more difficult. Your attacks give less style points and your ranks degrade much faster. In addition, enemies hit harder, parrying is more difficult, and going into Devil Trigger mode no longer sends enemies into the air.

Combine hardcore mode with another new modifier called “Must Style Mode,” which makes it so that enemies cannot be damaged unless Dante has a style rank of S or higher, and there’s no doubt that hardcore fans will find no shortage of challenges in the Xbox One and PS4 versions of DmC. 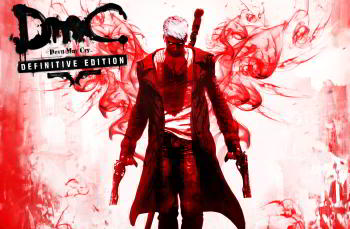 Finally, the Definitive Edition also includes a turbo mode, which speeds up the game by 20 percent, making an already frantic combat system even more chaotic.

The downside is that with the exception of hardcore mode, which can be selected from the start, and turbo mode which can be unlocked a short ways into the game, everything else must be unlocked by beating the game. There’s even a new difficulty mode called “Gods Must Die,” which takes the already super difficult Dante Must Die mode and makes it so enemies spawn with their Devil Triggers active. Oh and you can’t use any items. But in order to unlock it, you must beat the game, then beat it again on Son of Sparda difficulty, and then again on Dante Must Die difficulty. That seems like a lot to ask to unlock a mode that only the most hardcore of hardcore DmC fans will want to get anywhere near.

The Definitive Edition also boasts several small improvements and addresses a lot of the complaints that many critics had with the original game. First off, you can now individually target enemies by holding down the right bumper, which also means that you can now perform Dante’s dashing attacks, like the Stinger, using the traditional method of holding the right bumper, pressing forward, and attacking. The game includes multiple control schemes and allows for custom key bindings as well.

A common complaint that players had with the original DmC was that the color-coded enemies – ones that forced you to use a specific weapon in order to even damage them – broke the flow of combat and forced you to fight while limiting your many different options. While the color coded enemies still remain, Ninja Theory at least made it so that your attacks don’t just bounce off them if you attack one with the wrong color. They take damage from all sources, just very reduced damage unless you hit them with the proper weapons.

The Definitive Edition also does away with the bronze, silver, gold, and platinum keys system for accessing the secret rooms and instead just makes all of the keys gold, meaning any key you find will be able to open any secret mission.
Finally, if you’re looking for content, the Definitive Edition also comes packed with all of the DLC, including Bloody Palace, Vergil’s Downfall, three Dante skins, three weapon skins, and a brand new skin for both Dante and Vergil that make them look more like their original selves from Devil May Cry 1 and 3 respectively.

DmC: Devil May Cry: The Definitive Edition is the rare remaster where the visuals are not the main selling point. 60 FPS is nice, but if you’ve wanted to play DmC at 60 FPS, there have been plenty of opportunities to nab DmC on PC during a steam sale for half off or more.

Instead, what make this the definitive version of DmC are the gameplay adjustments. Hardcore mode boasts an improved style system, Turbo Mode offers a fun way of making combat even more frantic, Stingers are now easier to perform and more in line with how they were used in previous games, and small tweaks to various enemies make them a lot more fun to fight against.

Its hard to recommend spending another $40 if you’ve already played DmC, especially since you’ll have to unlock all of the difficulties again, but first timers should definitely consider giving this version of DmC a chance. Yeah, Dante’s still a foul mouthed rebellious teen and not a smooth talking silver haired badass, but most of the problems from a gameplay standpoint have been addressed. Add on to that the addition of the Bloody Palace and Vergil’s Downfall DLCs, and you’ve got a pretty good value on your hands.