The Muppets, is the twelfth film to feature Jim Henson’s iconic title characters as the stars. Here’s a quick rundown of the earlier installments to help catch everybody up.

NOTE: The two films from 2002, It’s A Very Muppet Christmas Movie and Kermit’s Swamp Years, are not included on account of I haven’t seen either in their entirety.

The original film is still, after all these years, frequently regarded as not only the best Muppet film but also the best Muppet-related production, period. I can’t really argue otherwise. Billed as a (loose) prequel to the Muppet Show series, it’s the story of banjo-strumming Kermit’s departure from the swamp to seek fame and fortune in Hollywood, picking up a motley crew of similarly-inclined pals and battling the machinations of a sinister fast food entrepreneur along the way. Of all the films, this is the one that best captures the uniquely-70s vibe of the series; one part wacky puppet comedy, one part vaguely-grimy 70s road movie, one part totally sincere quest-for-enlightenment epic.

In a way, the film is like the apotheosis (or the last defiant gasp) of the starry-eyed flower child ethos of the late 60s that had infused Jim Henson’s work and persona from the beginning but was otherwise teetering on the brink of pop culture oblivion at the time the film was coming out – the story of a collection of shaggy, silly, idealistic misfits surviving a psychedelic journey through Americana en route to immortality via the entertainment biz.

Film #2 was more of a straightforward satire of mystery movies, with Kermit, Fozzie and Gonzo as reporters who get wrapped up in a case of mistaken identity and jewelry theft. These days it tends to take some hits for focusing more on physical comedy than the wordplay that had characterized the earlier film, but it’s exceptionally paced and features one of the more interesting versions of Miss Piggy, who probably undergoes the most drastic character shifts from film to film of any “main” Muppet. It also features the famous bike-riding scene, which is among the most technically complicated sequences Henson’s team ever put together.

The final installment of what’s generally thought of as the original/classic Muppet Trilogy goes back to the more genial “grownup-movie-but-with-silly-puppets” feel of the original, dropping the cast into a semi-retread of the first film’s stardom search narrative with Broadway replacing Hollywood, infused with the post-Woody Allen “rebirth of the Empire City” vibe of mid-80s New York. This time, Kermit and company are college graduates trying to get their variety act turned into a Broadway show, complicated by a character-scattering breakup and an amnesiac Kermit briefly transformed into a yuppie ad executive.

Poking fun at showbiz had always been part of the Muppets bread and butter, but this is easily the most “inside” example of that particular streak of humor, with lots of jokes about production politics, script pitches and industry nepotism in between the more general “because it’s New York” stuff. One memorable extended cutaway expanded the Muppet Universe by introducing The Muppet Babies. That one bit went over so well that it was turned into an above-average animated spinoff that introduced a whole generation to the wonder of cartoon characters interacting with popular movies and public-domain film clips.

This would be the last (theatrical) Muppet feature completed before Jim Henson’s death, and marks the solo directing debut of Muppet performer (and voice of Yoda) Frank Oz, who went on to have a tremendously successful post-Muppets career in “regular” movies. 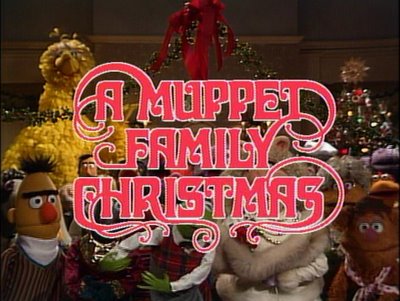 A made-for-TV movie, Family Christmas also serves as a kind of nexus point between the four current Muppet franchises – Muppets, Fraggle Rock, Sesame Street and Muppet Babies – the only time (other than a brief glimpse of Fraggle and Sesame characters in a crowd scene at the end of Manhattan) all four worlds crossed over.

The setup is boilerplate: The Muppets – along with Doc and Sprocket and (eventually) the Fraggles and Sesame Gang – are snowed in at Fozzie’s mom’s house on Christmas Eve, but as it turns out a Christmas Special is the perfect fit for the characters’ signature silly/sentimental groove. As a kid, seeing Kermit (briefly) step into Fraggle Rock kind of blew my mind.

Jim Henson died, unexpectedly, in 1990 – I was nine years old, and remember the devastation of learning this the same way others my age are supposed to remember Kurt Cobain. The Muppet brand had (literally) lost its soul and voice, and the characters have never really recovered. So it was sort of appropriate that the first film of the post-Henson era opted to strike out in an entirely new direction: an adaptation of Dickens’ classic with The Muppets playing the supporting characters opposite Michael Caine (this is often called the beginning of his “career rehab” after a lengthy run of B-movie bad-guy parts) as Ebenezer Scrooge.

Overall, it’s the best by far of the post-Henson films (excluding the new Jason Segel reboot), deftly combining the remaining Henson crew’s elsewhere-honed skills at FX-driven moviemaking with classic Muppetry. It’s still somewhat imperfect – if you grew up with the original Muppets, Kermit and Rolf will just never sound right – but it’s a fine film in its own right and deserves its subsequent reputation as a holiday classic.

The “classics but with Muppets” angle gets tried again, but this time with somewhat mixed results. It’s certainly not a bad film – if nothing else, it’s amusing to see all-time-overacting-champ Tim Curry opting for a (mostly) subtle, straight turn as Long John Silver opposite the constantly-mugging Muppets.

It has some terrific song numbers and when the characters are left to their groaner-joke/wacky-pratfall antics it’s as funny as ever, but it becomes naggingly clear that the “classic adaptation” bit offers diminishing returns.

And then there’s this one. By no means awful, it’s almost universally seen as the least of the Muppet movie canon. The lack of cohesive characterization for just about anyone to the cookie-cutter premise (Gonzo is actually a lost alien) to the lack of original songs (bad idea) just add to the feeling of this being a kind of generic late-90s sci fi comedy with the Muppets half-heartedly walking through the plot. The film opened to indifferent box office and audience apathy, and ultimately marked the end of The Muppets as a feature-film force for an entire decade.

Disney acquired The Muppets over a long-term series of business negotiations between the 90s and the present, but without Jim Henson around, Disney as much difficulty figuring out what to do with them as Henson’s own inheritors did. One of the results of that flailing-about was this, an ill-advised return to the “classics-with-Muppets” format mainly built up as a star vehicle for then-hot pop singer Ashanti. Kermit is the Scarecrow, Gonzo is the Tin Man, Fozzie is the Cowardly Lion and the audience is largely annoyed. If nothing else, be thankful that the new movie is good because otherwise this would’ve been a truly pitiable end for the franchise.