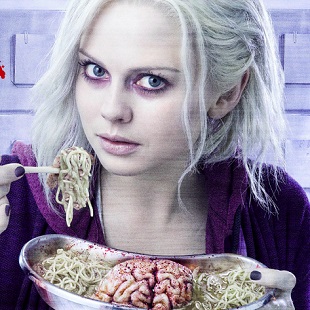 Can a zombie comedy be a fall season hit? We’ll be tuning in to CW to find out.

Though we were supposed to see a full pilot of CW’s upcoming zombie series iZombie at SDCC this week, they’re currently doing some reshooting because the main character’s best friend has been recast. Instead, we saw some extended sequences from the series which gives us a good idea of how the finished product will feel. iZombie is loosely based on a comics series of the same name, though names and settings have changed. The television show focuses on Liv, who woke up from a disastrous party as a literal zombie.

So what’s a modern zombie to do to get by? Liv dumps her fiancé because she doesn’t want him to catch what she’s got and abandons her medical studies to become an assistant at a police morgue, which gives her the opportunity to easily get the brains she needs to survive. Because no one knows her secret, her family and friends don’t understand her change in direction — and it probably doesn’t help much that as a zombie, she’s hardly the picture of health, with pale skin and deep shadows around her eyes. However, when her morgue colleague finds out about her condition, he’s surprisingly open-minded about her un-life status. When the two of them discover that eating the brains of these murder victims gives her insight into their memories — which she uses to help hunt down killers.

The series merges two genres that don’t seem to fit together, making a zombie show in a police procedural format — but from what we’ve seen, it works. The tone of the show is pretty lighthearted considering it’s fairly dark subject matter — more Buffy the Vampire Slayer than The Walking Dead — with a lot of humor and plenty of pop culture references. But it’s not all comedy as Liv gets some real action scenes too. In the footage, we see Liv chase down a bad guy in a car, punching through the car windshield to grab the wheel and crash the car. She walks away unscathed despite having taken a bullet and being thrown from the car — so there are some advantages in being a zombie after all.

There’s not a set air date for iZombie on CW, though it’s expected to make an appearance on CW later this year — and from what we’ve seen, it definitely looks like one to watch.