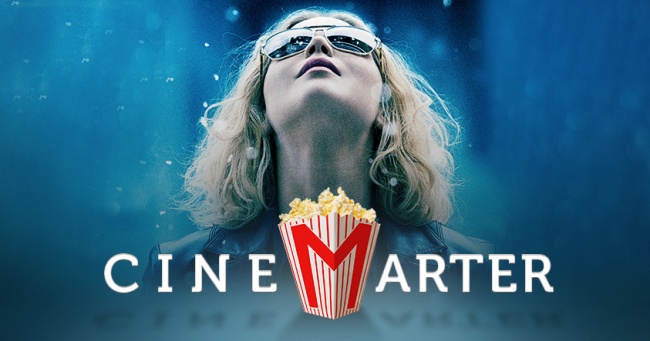 It might be time for director David O. Russell to get a new shtick. His last three theatrical releases have all featured Jennifer Lawrence and Bradley Cooper in prominent roles, and the returns have been diminishing each time. Silver Linings Playbook was okay but a disappointment after the wonderfulness that is The Fighter. American Hustle dazzles on a first look but reveals itself to be a decent but pale Scorsese imitation with any deeper look. And now we have Joy, a film that does get better as it goes along, but nonetheless is probably the most mediocre film in Russell’s filmography.

If the only thing you know about Joy is from seeing the trailer, you’ve been misled. The film is about the woman who invented the Miracle Mop, Joy Mangano (portrayed by Jennifer Lawrence). We begin in 1989, as she lives the life of a divorced mother trying to keep her household together. She’s always been an inventor at heart but put those dreams on hold to have a family. Now she works as a booking clerk and sometimes helps out with her father’s (Robert De Niro) auto repair shop. Her mother (Virginia Madsen) lies in bed and watches an abysmal soap opera, while her ex-husband (Edgar Ramirez) lives in the basement. It’s dysfunctional and becomes annoying to the viewer far quicker than we hope it would. 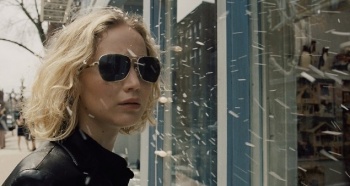 It’s only after Joy starts to be about Joy becoming an inventor and entrepreneur that it begins to get interesting. Joy is a hard-working woman who deserves success, this much we can be sure, and seeing her constantly be denied, only to keep fighting harder, is both inspirational and entertaining. She’s smart, resourceful, and refuses to take “no” for an answer. When she gets away from the family “drama” and takes control of her life, Joy becomes quite a fun film. It’s a shame that, by this point, about half of it’s already over.

If nothing else, Joy acts as a testament to both this story and the woman behind it. This is, indeed, a story that should be told. Was David O. Russell the right person to tell it? We know he can do drama well – The Fighter is, after all, fantastic – but the drama here is annoying and rarely helps us get involved in the story. The oft-quirky nature of the proceedings doesn’t allow us to take it as seriously as it probably should have been. The film’s length, and divergences that don’t feel like they fit, also feel off. Russell’s sensibilities just might not have been right for this particular project.

It suffers from some pacing and tonal issues, as well as annoying family drama and less-than-stellar acting from anyone not named Jennifer Lawrence.

What Joy does best is act as an inspirational, empowering story – doing so without any hesitation or apology. Early in the film, it’s declared that Joy’s superpower is that she “doesn’t need a prince,” and that’s something that remains true for its entirety. Lawrence and Cooper may have been romantic companions a couple of times in the last few years, but in this film that’s never even considered to be a possibility. This is a story about a woman doing what she wants, how she wants, and it stays faithful to that throughout. There’s no obligatory romance, there’s no point at which she can’t get herself out of a predicament – often something she didn’t even cause – and it’s refreshing to see a film that has no problems doing that. If there’s one thing to praise about Joy, this is it.

Okay, maybe there are two things to praise. Jennifer Lawrence is also excellent in the title role, even though she’s close to a decade younger than the real Joy was at that period of her life – and that gap in age gets even worse when the film fast forwards through time to when Joy is a success. (Playing with time also makes the ending lose some of its luster.) But, regardless of the age gap, Lawrence’s powerful and determined performance will keep you interested. She’ll likely get an Oscar nomination – although if she wins this year, it’ll be undeserved – and she’s well worth watching.

The rest of the cast, though? They feel more like they’re going through the motions than anything else. Robert De Niro hasn’t exactly been consistently good for a while now, but he’s worse in Joy than he was earlier this year in The Intern. Edgar Ramirez, at least, reminds us that he’s not always as bad as he was in the same-week-release Point Break, but he’s not exactly great here, either. Bradley Cooper probably has the best supporting performance, but he’s not stretching to play a fast-talking executive at QVC. Diane Ladd, Virginia Madsen, Isabella Rossellini, Elisabeth Rohm, Dascha Polanco, and Melissa Rivers (playing her mother) round out the cast, but most of them are footnotes and not all that memorable.

Joy is a passable movie that should have been better. It suffers from some pacing and tonal issues, as well as annoying family drama and less-than-stellar acting from anyone not named Jennifer Lawrence. This is a story that I now believe should have been made into a feature-length movie, but I’m not convinced this was the crew to do it. This is an inspirational and empowering movie that’s bogged down by things that likely didn’t need to be there. It’s not going to anger anyone by existing, but it’s also a little disappointing, all things considered.

Bottom Line: A disappointing but still serviceable movie, Joy doesn’t have much of its titular word, but it does serve as an inspirational and empowering film, even if it’s bogged down with stuff that didn’t need to be there.

Recommendation: If you want a quirky comedy-drama about the woman who invented the Miracle Mop, as well as some annoying family drama, watch Joy.