King’s Forge is a dice board game that asks players to think strategically, but go with their guts when it comes down to the line. Players take the part of master craftspeople in charge of their own smithies and crafthouses, all competing for the right to be the king’s next personal smith. They roll dice to craft, and spend those same dice to get more, different kinds of dice. The game is about strategically balancing what you have available now with what you know you’ll need more of in the future. It’s a fun experience, and like many dice games uses elements of push-your-luck style play, but manages to stay more strategic, competitive and random. It tends to play a little slow in the early parts of the game before becoming a mad rush near the end, uneven pacing that gives advantage to more experienced players, but it’s a fun and light strategy game that a wide range of player types can enjoy. 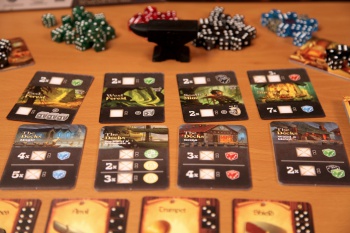 King’s Forge is loaded with pretty dice in a variety of colors, each signifying different kinds of materials used to craft items: Metals, Woods, Gemstones, and Magic. There are a few other unique dice, and those, too, have a special look to them and a good quality for the sheer volume included. The cards and cardboard pieces are all of good quality, and while the box is a little big for all the components, it’s not sinfully large. The rules themselves are laid out a little counterintuitively, making it hard to learn the nuances of the game. Thankfully the layout of the cards is generally immediately apprehensible, and the symbols used to represent various actions that can be taken from the cards are clear enough that I never once consulted the rulebook definitions once I’d learned them.

On any given round, you’ll spend dice from your pool of available materials to use squares on any of a number of cards that represent locations like forests, mines, traveling caravans, and alchemy labs. Those dice will either be destroyed or simply returned to your pool later. In exchange, you’ll get more dice of varying colors that first go into your workshop, then into your pool the next round. Alternately, you’ll get a badge or token that can add one to a roll you make later, allow you a re-roll, or let you flip a dice over to its opposite face. At the end of each round you’ll then roll your unspent dice and match their values to any of the three items available to craft at that time. At the end of the round, you keep the items you’ve made and the first person to craft a number of items wins. However, if someone else makes the same item you’ve already made with better rolls, then you lose it and they keep it forever. 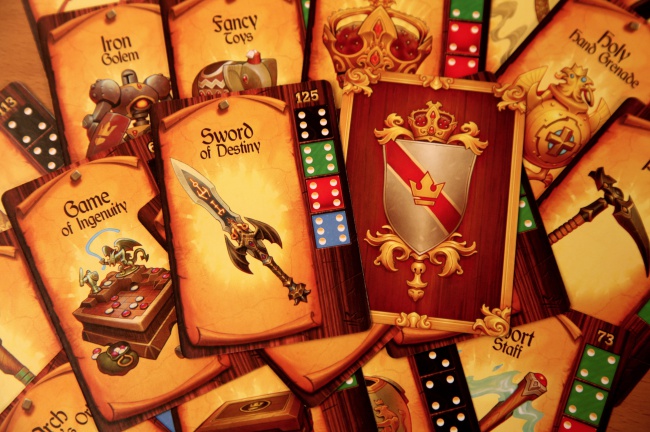 It’s a blend of small-scale strategic thinking and the immediate satisfaction of deciding how few dice you can keep in your pool to have good odds of making an item well. You’ll find yourself throwing out a few dice in early rounds, burning them quickly for a good shot at getting a hard early craft – then you build an engine of dice to spend each turn, accumulating a huge pool that you can use to get rare Magic and Gem dice quickly. Finally, you’ll burn that engine out, trying to roll each turn and grab every possible advantage to race your opponents to victory. Occasionally, you’ll get foiled by a timely steal on an enemy’s part. Sometimes there’ll be surprise victories as a player pulls out a surprise win of perfect rolls on a round you decided to build up your pool.

The game has a few advanced rules available, with an interesting variety of card types for resources and for crafting making each game unique. It’s clear that much like any game with high variability in setup, there can be clear optimal strategies that emerge. Often, that can lead to the player who’s already ahead getting into a runaway leader, and only a run of really bad luck can slow that person down. King’s Forge suffers from uneven pacing more than anything, and games fall into a pattern of quick early game, plodding middle, and mad rush for the finish. It can leave you wishing for a more even pattern of development, where developing your dice pool went alongside crafting instead of before and after it. That said, for a game with a playtime of about an hour it still moves fast enough that nobody’s going to get too bored, but playing multiple times in rapid succession can leave you wanting something else.

Recommendation: Strategy gamers looking for a lighter experience or social gamers who want something heavier for their collection will do well to look at King’s Forge.