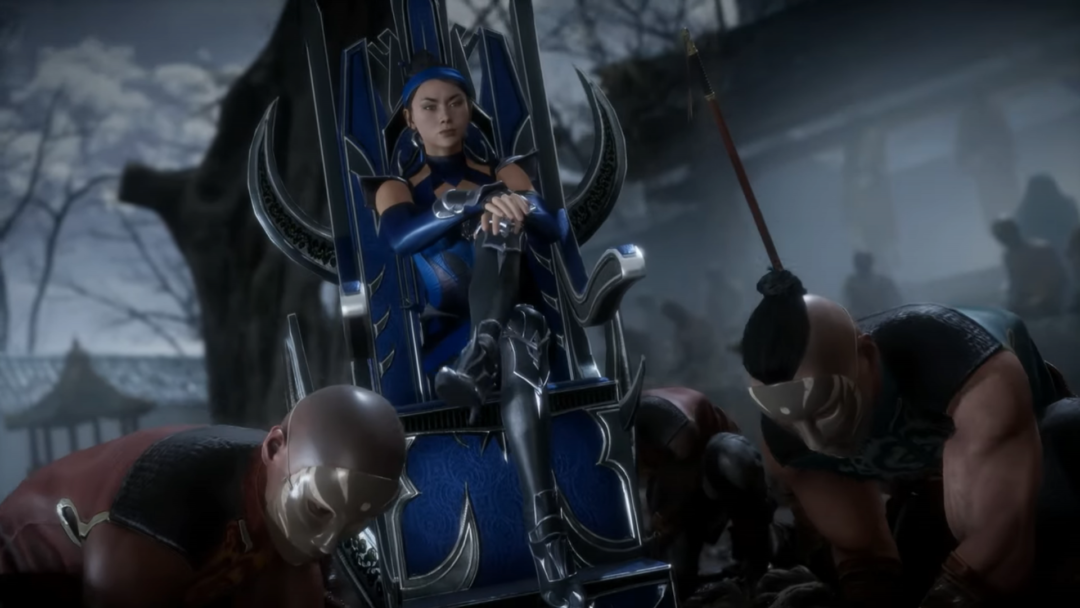 Mortal Kombat 11 marks 27 years of the series. An entire generation of gamers has grown to adulthood and had kids of their own since the game first became the subject of  playground brags about figuring out how to pull off the nastiest fatalities. The series is part of the conversation surrounding abusive practices within a comparatively young industry and it throws into sharp relief how far we’ve come from the days when games were largely the weird passion projects of a handful of programmers.

Perhaps no character epitomizes the series’ growth more than Kitana, a fixture since 1993’s Mortal Kombat II roared into arcades in a shower of bones and blood. The brainwashed, razor fan-wielding princess of Outworld took 26 years to reach her apotheosis. It’s too bad the latest game’s story wasn’t content to leave it at that.

When she was introduced in Mortal Kombat II, Kitana was working for her father, the belligerent overlord Shao Khan. Her loyalties were under suspicion, which added just a little bit of juicy context for players who were mostly focused on developing calluses trying to chain together her fan lift with a follow-up square wave punch.

Many combatants have come and gone through the nine other main Mortal Kombat titles, but Kitana has remained a mainstay. Kitana’s evil father/stolen birthright story provides classic high melodrama, and her evil clone sister Mileena was perfect for the creative team’s penchant for palette swapping fighters so they could cram as many sick combos and fatalities into the game with as few actors as possible.

The non-canon ending of her first appearance had her defeat Shao Kahn and reclaim rightful rule over her stolen realm. But Kitana’s main function in the ongoing series has mainly been as love interest for default hero Liu Kang. She was included in the 1995 Mortal Kombat movie but not used to her full potential, failing to get a single kill or no-holds-barred fight scene. In the sequel, Mortal Kombat: Annihilation, she just gets captured.

Still, the core of her character was there: A woman rebelling against her captors who know she’s on to their treachery.

As Mortal Kombat has piled lore atop lore in the two decades since Kitana’s debut, a great deal of the story has directly dealt with her specific plight. It turns out that Kitana isn’t really from Outworld but the realm of Edenia. She’s a victim of Shao Kahn’s brutal expansionism and a sort of cautionary tale for what will happen if Earthrealm’s warriors fail to resist his invasion. Mortal Kombat 3 introduced Sindel, Kitana’s mother, as the resurrected thrall of Shao Kahn and another source of drama for the princess.

Outworld itself has become more complex as the series has moved on. Since the 2011 reboot — confusingly titled just Mortal Kombat — the series depicts different ethnic factions fighting to fill the power vacuum left by Shao Kahn’s death. Instead of scrapping for a shot at the throne in Mortal Kombat X, Kitana was busy as an undead revenant, ruling the Netherrealm with her zombie boyfriend Liu Kang. It’s complicated.

In another bid to shake up the series’ timeline, Mortal Kombat 11’s big bad Kronika, devious goddess of time, draws fighters from the series’ past into the present day. This plot contrivance means the Kitana and Shao Kahn of 20 years ago coexist with the corrupted undead Kitana of the current timeline. The game’s story gives players a solid stretch of play controlling the younger Kitana that culminates in one of the big hero moments of the game — one promised by her backstory but never truly delivered before.

Kitana brokers peace between the various Outworld factions with the promise of political enfranchisement if they back her in the fight against Shao Kahn and Kronika. In a climactic brawl, Kitana faces down Shao Khan, who sneers that she’s a weakling and that he only kept her alive to appease her mother. Players take control of her as she kills him and ascends to the throne as Kahn of Outworld. After more than 20 years of squaring off against this arrogant jerk, it’s incredibly satisfying to stand over his corpse.

It’s too bad that Mortal Kombat 11’s own convoluted time travel plotline promptly undoes all this. Kitana gets a brief glimpse of brutal glory as she charges the bad guys at the head of the army she just finished mustering, and then Kronika rewinds time back to the Cretaceous Period. Players again take control of Liu Kang, who is now a Super Saiyan for reasons that are not at all explained. As he defeats Kronika and takes control of the timeline, he lets Kitana be his time wife and they rewrite history together forever. Or something? It’s unclear if she’s still the Kitana that just did all that cool stuff.

It’s a disappointing and somewhat baffling ending, wiping the slate clean and again reducing Kitana to a love interest instead of the hero she should be. A great moment of growth for a fan favorite character is erased because the series is unwilling to let new stories grow out of the old ones. For a brief moment on a wacky mixed up timeline, though, Kitana was finally Kahn.