Kyn is set in a Viking mythology-inspired world protected by the Magi. These warriors train themselves within magical caves, where the survivors emerge with great powers beyond mere mortals. When two such warriors return from the caves after a prolonged initiation, they find their village under attack by the Aeshir – a once peaceful race that has suddenly become hostile and emboldened with dark powers. As the threat grows to threaten the entire continent, these magi find themselves traveling from village to village to protect innocents and understand the nature of the Aeshir’s growing evil.

Does that sound like your typical, epic RPG adventure? You’d be correct, although that’s also the problem – it’s a little too typical. Overall, Kyn feels like a paint-by-numbers RPG, like someone made it while reading a list called “What makes for an epic RPG?”. The end result is functional on the gameplay front, and can even be fun once you get the hang of it. But it doesn’t feel unique enough to be truly memorable, even after you’ve sunk several hours into it. 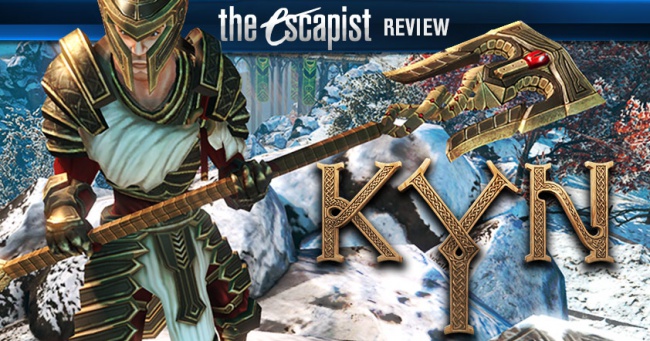 Kyn‘s system itself – highly reminiscent of old-school isometric games- is actually one of the game’s strongest features. The game plays as a combination of classic RPG and RTS titles, as you manage a party of up to six where magi characters can be customized to your liking. Kyn‘s system is classless, letting you assign points directly into Mind, Body, and Control traits to unlock advanced skills and special abilities. Depending on your play style, you could make an entire party of melee warriors, focused archers, powerful mages, or any combination you prefer.

What’s more, you can reassign points at any time outside of combat. That means you’re never permanently locked into a particular play style, and if your party gets unbalanced you can always tweak them to better meet a particular challenge. It also means you have a lot more freedom to experiment with character and party builds. If your reliance on archers doesn’t seem to be working, you can always switch gears mid-mission and try different power sets. It may not feel consistent from a roleplaying perspective, but it keeps the action moving anytime you get stuck.

The tactical elements come into play during combat, as you face enemy forces that either surpass your party in numbers, or are more powerful than individual characters. Thankfully, a single button press slows the action to a fraction of a second, giving you enough room to make quick decisions, find a spot to lay traps, or cast a healing spell before a character falls. It’s incredibly satisfying to overcome a seemingly unstoppable enemy wave, and given the range of abilities each character has there’s no shortage of options to turn too.

Not that Kyn‘s gameplay is without fault. There is absolutely no tutorial, let alone a polite suggestion to refer to the Help guide. If you’re already familiar with old-school games you’ll have a slight advantage, but odds are still high you’ll run into a steep learning curve right off the bat. Autosaves are few and far between, so if you forget to save often you easily lose up to an hour of progress. And that’s not even getting into the finicky nature of old-school games – like navigating the party up a simple staircase, or realizing a group member fell behind they got stuck on a cow NPC. None of these necessarily stop your enjoyment, but they are unpleasant reminders of gameplay quirks we thought were left behind long ago.

Now obviously we can’t judge a game for its system alone, we have to evaluate its story content as well. And on that front, Kyn feels rather lackluster. While the plot isn’t awful, it is overly broad, creating a generic fantasy universe that offers little that’s unique to the genre. The Magi are your typical fantasy heroes, while the assembling evil army is interchangeable with any other fantasy menace. Not that Kyn doesn’t have any personality: Making the Aeshir a peaceful race slowly corrupted into evil is an interesting touch. But overall the universe tends to feel pretty flat, engaging you on the merits of tactical combat as opposed to characters and nuanced storytelling.

Part of the problem is that Kyn has trouble delivering key information to the player. The game effectively starts with a cold open, using an opening cutscene that only establishes the Magi are leaving a cave with new magical powers. There’s no overall context for the world, or discussion of the trials they experienced. (And let’s not forget those cave trials would be a perfect place to fit in a handy tutorial.) Your second mission has a similar cold open, as the Magi appear on a beach talking about a horrible shipwreck they’d just experienced. You know, as opposed to a cutscene – or even a text description – of the dramatic plot development.

That being said, Kyn does offer some intriguing experimental ideas as it progresses. One of my personal favorite missions was to evacuate a snow-filled town under siege from a skeleton army, the twist being that fallen villagers are resurrected to fight for the enemy. It led to several tense encounters as I rushed against the clock, retrieved villagers near the outskirts, and lost my non-essential party members to the horde – characters I didn’t even know could be killed permanently. This is basically the old-school RPG equivalent of the White Walker attack from Game of Thrones Season 5, and it turned out surprisingly well.

Unfortunately for every good idea, there are other experimental touches that fall completely flat. Like puzzles where you navigate pits and spinning blades using Kyn‘s mouse-click navigation. Or when you meet a quest-essential NPC who’s terrified of party members, so he runs away slightly faster than your character’s movement speed. These elements usually aren’t long enough to be completely frustrating, but they do distract from the game’s actual strengths.

Which is a shame. There’s an engaging game within Kyn that could be more accessible with just some polish and fine-tuning. But at is stands, Kyn is an average RPG that entertains but will probably be forgotten by the holiday rush. Here’s hoping Tangrin Entertainment’s next game will surpass those limitations.

Bottom Line: Kyn is a solidly-crafted RPG with some fun and interesting set pieces, but isn’t innovative enough to stand out among similar titles in the genre.

Recommendation: Kyn is a great way to pass the time between RPG favorites, but what it aims for is better achieved elsewhere.