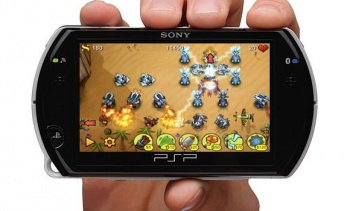 To invoke a rather troubling analogy, the iPhone and the PSPgo are kissing cousins, and in light of Nintendo’s Q4 release schedule this week it seems the DS wants in on the action. All three platforms are set to give birth to some strange looking children over the next few months. But if the X-Men have taught us anything, it’s that genetic mutation can sometimes be a good thing. Spectacular, even.

Take Fieldrunners, for example. In the absence of a consensus on what iPhone gaming’s official poster boy actually is, Fieldrunners is as deserving a candidate as any and its imminent arrival on both PSP and DS is a telling sign of the times. It’s not just that Sony and Nintendo are aggressively going after ‘snackable’ gaming, but that both are so ready to jump merrily into the sack with titles associated with a despised parvenu.

There is, however, a tendency in the media to forget the complex negotiations that precede the arrival of a game on any given platform. In the case of Fieldrunners’ journey to the DS and PSP, the reality is perhaps more to do with Subatomic’s business savvy than it is about conspiratorial efforts on the behalf of Sony and Nintendo to cynically build fresh momentum in the iPhone’s slipstream.

It would be churlish to suggest that Sony and Nintendo are marching to the beat of the iPhone’s drum, but they’re undeniably tapping their toes in time. Both the DS and PSP have Q4 release schedules featuring assorted iPhone hand-me-downs, including big hitters like Flight Control and Castle of Magic.

The appearance of Fieldrunners on the DS and PSP could scarcely be considered evidence of either company running scared from the big bad App Store, but it vindicates the iPhone as a platform and, obliquely or otherwise, pays it a considerable compliment whether or not Sony or Nintendo care to admit it.

Beyond the realm of headline hyperbole, the filtering down of iPhone titles onto other platforms is inevitable. It’s hardly a shock that great companies like Firemint and Chillingo are looking to other platforms to help boost their business.

If there’s one industry trend that Apple is solely responsible for, it’s for the change in the way handheld games are priced. Many developers have bemoaned the App Store’s unsustainable pricing structure.

It seems obvious, then, that it makes business sense to spread good licenses around more platforms. Platforms which Sony and Nintendo have obligingly provided with the PSP Minis range and DSiWare. Indeed, despite much industry hand wringing over handheld gaming pricing models, even Microsoft has finally decided to take the plunge, trundling out a potential wild card in the form of the impressive looking Zune HD.

Handheld gaming is booming, and the time for debating whether the iPhone is part of the picture has passed. Apple is in the game now – Sony knows it, Nintendo knows it, even Microsoft has realized. Have you?