Oliver chases after Thea, Diggle chases after an A.R.G.U.S. agent, and Laurel chases her rage in an episode that could have largely been resolved with heartfelt phone calls.

The third episode of season three, “Corto Maltese”, promises a lot of tension for Arrow. Oliver’s sister, Thea, has been under the tutelage of Malcolm Merlyn, the dark archer whose Undertaking made him the main villain of season one. For the last six months, she has been training with him on the South American island of Corto Maltese, a fictional country from the DC Comics universe with parallels to Cuba. With the trail of Sara’s killer gone cold, Oliver decides it’s time to bring Thea home. Oliver says he’s ready to tell Thea everything in order to convince her, including the truth about his time on the island and his new life as a vigilante, but while “Corto Maltese” sets up a big emotional moment, it doesn’t deliver it. Instead, Oliver’s efforts and Thea’s experiences over the last six months are muddied with two other subplots.

Diggle’s subplot sends him to find Mark Shaw, an A.R.G.U.S. agent in Corto Maltese who hasn’t checked in. Lila asks him to do it, and it’s asking us to question Lila’s motivations and loyalties between Diggle and Amanda Waller. Diggle’s subplot has the most action associated with it, so it gets a lot of the screen time because it can deliver the fights we’ve come to expect from Arrow, giving Oliver and Roy a chance to bring arrows to a gunfight. (Not to mention the cover they’re using is so flimsy even the kindest Dungeon Master would be hesitant to give bonuses.) The subplot feels contrived because ostensibly the reason they are in Corto Maltese is for Thea, but with all the focus on Shaw her story begins to feel like the B-plot. Oliver’s efforts to persuade Thea to return could have as easily been delivered by a telephone call. This imbalance in the importance of the storylines is worsened by the developments back in Starling City, where Laurel decides to take justice into her own hands again, apparently undeterred by her near-murder of an innocent man last week.

A young woman, a regular at Laurel’s Alcoholics Anonymous meetings, is in an abusive relationship and her boyfriend’s physical attacks on her have been escalating. Laurel decides to take on the boyfriend and dish out some vigilante justice, a fight that ends with her bruised and bloody on the ground and one that could have been solved by an anonymous tip to the police. Laurel’s obviously not handling her rage well, and it has twisted her away from being able to see the rational solutions to problems, something that Oliver seems to recognize when he refuses Laurel’s requests to train her. Laurel is headed towards a very dark place, drawing away from or being refused by her support systems and continuing to seek a way to change the world by punching it. It’s the same path Oliver has chosen, but until he realizes that, he’s keeping Laurel at arm’s length and letting her sink further into darkness.

Arrow airs Wednesday nights at 8/7c on The CW. You can also watch the latest episodes on The CW’s website and Hulu. Lots of spoilers from the episode, the comic books, and some speculation about Laurel’s future and Oliver’s secrets follow.

The boxer Laurel interrogates is Ted Grant, and a direct reference to the comics. In the DC Comics universe, Grant is a former prize fighter who becomes a feline-themed vigilante called Wildcat. His son, Tom Bronson, whom Laurel suspects of a robbery, also becomes a vigilante in the comics. Tom is a metahuman, with the ability to transform into a werecat.

In Diggle’s subplot, Shaw turns out to be making a desperate play to get out of A.R.G.U.S. by selling the identities of agents and their families. Diggle uses a security transcoder to prove that he was sent by Lila, and it is revealed that Shaw needed the security transcoder to decode the information he stole from A.R.G.U.S. It’s a flimsy plan that doesn’t stand up to fridge logic. If Shaw knows that Amanda Waller is likely to simply send a squad to kill him if he doesn’t check in, how could he be certain that Lila or someone else at A.R.G.U.S. would send him exactly the piece of technology needed to let him make the sale? When Diggle meets Shaw, Shaw gives him a challenge phrase so that he can prove that he is from A.R.G.U.S., but he’s not, so instead he has the transcoder. How could Shaw be certain that Lila would send someone who was not with A.R.G.U.S. to check on him? If an agent had come, they would have used the challenge code to prove their identity. How did Shaw ever hope to sell the data in the first place? This was either a very bad plan, or Lila is a lot shadier than I want to believe. 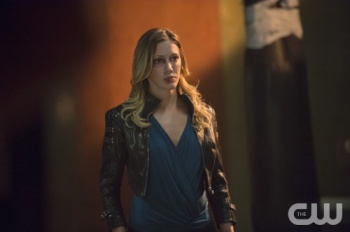 Laurel’s entire excuse for vigilantism in this episode is largely resolved by her father putting in an anonymous tip about the abusive boyfriend. The boyfriend is brought in by police on outstanding warrants. It’s another strike against Laurel, to see such a simple, straightforward solution resolve her concerns, and it reinforces the fact that Laurel isn’t actually thinking about helping people. She just wants a way to justify hurting others, and it’s that distinction that divides her vigilantism from Oliver’s. She doesn’t even consider going to the young woman and helping her find support and services to help her leave the abusive relationship. Laurel just strikes. In the comics, Black Canary is named Dinah Laurel Lance, and the season so far has hinted strongly at Laurel taking up her sister’s mantle, with Laurel literally carrying her sister’s jacket as a symbol of that. How Laurel will make that journey with no support from Oliver and while lying to her father I don’t know, but I expect a major tragedy or failure is going to be needed to bring them back together if she is to become a hero in this story.

We don’t see much of Felicity, but we do learn two things. First, she hasn’t told the Arrow team that she’s working for Ray Palmer. Second, Ray is digging up old weapons plans from Queen Consolidated’s destroyed Applied Sciences branch. Ray is up to something, and while I think he’s destined to join up with the good guys (based on his namesake in the comics), he’s still being portrayed as someone with unseemly motivations.

The big question for me, now, is whether Malcolm Merlyn has revealed to Thea the final secret that he’s keeping from her – that her brother, Oliver, is The Arrow. That’s the confrontation that I was hoping see in “Corto Maltese”, but it seems that Arrow is going to make us wait on that secret, especially with the return of Nyssa al Ghul at the end of the episode.

Bottom Line: “Corto Maltese” works hard to get the cast of Arrow to where they need to be: Thea back in Starling City, Diggle questioning Amanda Waller’s hold on Lila, and Laurel taking justice into her own hands, but it feels rushed and a bit shaky, especially where a phone call would have achieved the same ends.

Recommendation: Arrow is still finding its core story this season, and until it does it will continue to feel fragmented. Hopefully, after “Corto Maltese”, all the pieces are in place for whatever comes next.