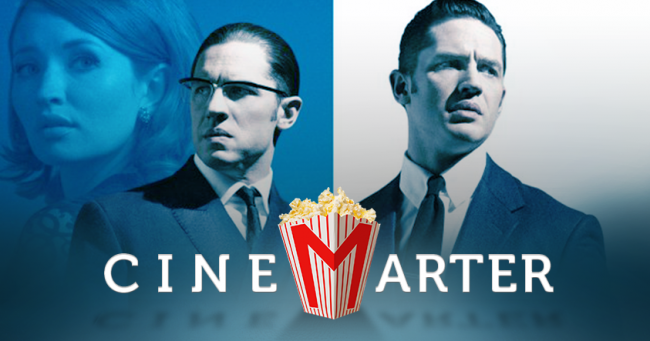 First thing’s first: 2015’s Legend is not the best movie to hold that title. Ridley Scott‘s Legend from the ’80s is far, far better, and if, for some reason, you have “watch a movie called Legend” on your bucket list, that’s the one to watch. And if you only have a quota of one to fill on your “gangster movies to watch in a year” Black Mass is the one you want from 2015. All of this sounds like Legend isn’t a very good movie, and I guess that’s because, for the most part, it’s just an okay film. It only has one special element – which I’ll get to later – and is mostly just mediocre.

Legend is about the Kray brothers, Ronnie and Reggie (Tom Hardy and Tom Hardy; yes, again), twin gangsters at the top of their game in the crime scene of East London in the 1950s and ’60s. Reggie is the smooth-talking one who handles the business end of their, well, business, while Ronnie has a lust for violence and has spent several years in a mental institution after being diagnosed as a paranoid schizophrenic. The two own a club, get people to pay for their “protection,” have rivalries with other gangs, and do all the things that you’d expect from gangsters of that period.

The emotional hook of the film is that some of the action is filtered through the perspective of Frances Shea (Emily Browning), who narrates the film and shows up early on as the woman wooed by Reggie, and who later becomes his wife. As a result, Reggie becomes more of our protagonist than Ronnie, as he is given something of a character arc, and because his thinking, loving character is more interesting than the brute that comes in the form of Ronnie, but only barely. This is the way the film wants to differentiate itself from other gangster movies, but in reality doesn’t do much to change things up.

Legend has style to spare, with Dick Pope‘s cinematography delivering lots of pretty long takes, and Brian Helgeland‘s scene-to-scene direction ensuring that, even if the events on-screen aren’t particularly interesting, at least he’s going to present them to us in a way to try to stave off our boredom. Legend is Every Gangster Movie Ever in a lot of ways, but at least it looks pretty good. It has all the elements that you’d expect, although it frequently feels like it doesn’t quite know what to do with them, or how to make them flow seamlessly and cohesively. It often feels like we jump from one event to the next because either (1) it’s a gangster movie cliche we haven’t yet hit or (2) it’s an important event in the life of the Krays.

Legend will come across as a disappointment to anyone who is expecting an exceptional gangster movie about two of London’s most notorious gangsters.

It likely doesn’t help that the film is often so cold that it’s hard to get much of an emotional connection with these characters. It’s slickly designed, but the heart has been taken out. As such, you’re watching these guys in their suits and their slicked-back hair and their guns and their smoking and their profanity – and you feel nothing but apathy toward everything that’s going on. We don’t get enough genuine insight into these characters or their lives, as they feel like every other gangster. Legend comes across like a poor man’s Martin Scorsese flick. It’s got the style, but it’s missing the love.

I mentioned that Legend has one special element that elevates it beyond mediocrity, and that element, as you may have guessed, is Tom Hardy, here playing dual roles so effectively and effortlessly. While he’s helped out by one of the Kray brothers frequently wearing glasses, he manages to easily create two distinct personalities, ensuring that we always know who’s who. They’ve got different mannerisms and different ways of speaking. There’s a fine line between making them too similar that we can’t tell them apart and too different that we can’t believe they’re brothers, and Hardy walks that line like a champion. Emily Browning turns in her best dramatic performance to date, while Taron Egerton, Christopher Eccleston, Paul Bettany, and David Thewlis all deliver solid performances.

Legend will come across as a disappointment to anyone who is expecting an exceptional gangster movie about two of London’s most notorious gangsters. It’s all too familiar, and all too cold, to be that. It is a generic gangster movie that is elevated by two outstanding performances by Tom Hardy, who does such a great job at playing the Kray brothers. But, beyond his outstanding performance – and overall good acting from the supporting cast – there’s very little to differentiate Legend from a couple dozen other gangster movies. It’s not the best gangster movie of 2015, it’s not the best movie named Legend, and it’ll be forever forgotten as a footnote on the careers of all involved.

Bottom Line: Legend is a disappointingly familiar and cold gangster movie with a tremendous double-turn from Tom Hardy.

Recommendation: Big Tom Hardy fans will want to catch Legend immediately, but for anyone else it’s best left for home video, if at all.