“Beyond the Wilds” is a mostly great episode with some pacing issues, but you won’t mind by the end.

There are only four episodes left after this action-light episode, which focuses on the internal struggle Korra has faced throughout Book Four. While that situation is handled brilliantly, “Beyond the Wilds” is weighed down as it creates the context to get the Avatar to that point. It’s the first part of The Legend of Korra’s final act, but hopefully the pacing isn’t indicative of the series’ upcoming final episodes.

After last week’s clip episode, “Remembrances,” any plot development is welcome, and “Beyond the Wilds” definitely moves the story forward. Some viewers might be disappointed in the lack of action this week, but if the rest of the episodes deliver, we may look back on “Beyond the Wilds” with appreciation for its personal story.

The humor in the episode isn’t on the level of the Varrick and Bolin antics we’ve enjoyed lately, but it’s entertaining nonetheless. Even after separated Bolin and Varrick earn a few laughs, and Jon Heder returns briefly as Ryu, who’s pretty much Jon Heder as an airbender.

“Beyond the Wilds” is also an especially pretty episode. There are a few new environments that look great, and the characters and their animations are fantastic. This isn’t unusual for the typically gorgeous Legend of Korra, but this episode stood out. And of course, as we’re approaching the end of the series, the music is getting more intense for brief moments. I doubt we’ll get anything on the level of Avatar’s final Agni Kai, but certainly the last episodes of Korra will deliver something fantastic.

Spoilers ahead, for those that haven’t watched the episode yet.

Unable to enter the spirit realm to save her friends, Korra decides to confront Zaheer. Ever since her battle against him three years earlier, Korra has suffered flashbacks to her near-death experience. Time and again, Korra thought she was ready to forget about that day and move on.

Katara could only heal her physical ailments and help her with rehabilitation, Toph was able to guide Korra to remove the rest of the poison metal, but it’s Zaheer himself that helps Korra emotionally recover from the trauma he put her through.

“You think your power has limits,” says the man that once tried to kill her. “I say you’re limitless.” 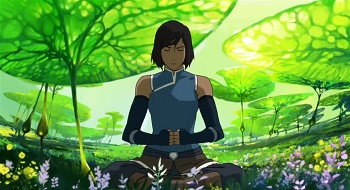 As an anarchist, Zaheer is compelled to help Korra take on the nearly fascist Kuvira. He guides Korra back into the spirit world and past her memories of her battle against him, encouraging her to accept the trauma she suffered at his hands. Until now, Korra has done her best to avoid thinking about the incident, but now she is “whole again.”

“I’m finally able to accept what happened and I think that’s going to make me stronger,” Korra tells Mako after reuniting with the light spirit Raava and saving her friends.

Korra’s meeting with Zaheer functioned fantastically to help her resolve the issues she’s dealt with throughout Book Four – if in fact this is a resolution. As well-rounded a story as it is, I wouldn’t be surprised to see that Shadow Korra appear in one of the final battles of the series. 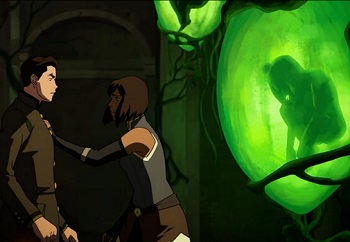 While the scene between Korra and Zaheer was fantastic, getting to that was the low point of the episode. The spirit vines in Republic City are grabbing people, starting with Ryu’s tour group (the airbender voiced by Jon Heder is apparently rather ineffective as a bender), and later Jinora. The vines seem to be reacting to the Earth Empire harvesting the banyon-grove tree back in the swamp. For some reason, those captured by the vines are placed into weird plant-pods while their spirits are locked in the spirit world.

At its core, it’s not a bad story, and it works to connect other elements on the episode. The problem is that it takes a while before the story becomes interesting (Korra heading to Zaheer) and the purpose behind the pods is never given. This might be a question that is answered later, but as far as this episode goes, the entire spirit vine plot just drags everything out.

We’re coming up on the end, and next week’s episode includes a “surprise” we all saw coming (obviously, spoilers for next week in that link). It appears that Korra is fully recovered, but we’ll see if there’s still anything inside of her to provide a challenge in the coming battles. “Beyond the Wilds” also gives a great farewell to Zaheer, Korra’s last surviving major antagonist, besides Kuvira.

Bottom line: The Zaheer portion is brilliant, and the rest of the featured characters are fantastic. The hostile spirit vines story takes up too much space to have no greater significance, though.

Recommendation: An old villain returns. Come on, you have to watch this one. Anyway, it’s likely that this and every episode to the end of the series will be required viewing for those still on board.