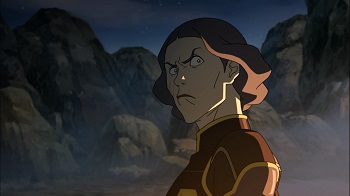 “Operation Beifong” is another fantastic episode from Legend of Korra’s Book Four with lots of humor, great character moments, and the best fight sequence of the season. Other than that, there’s not much that can be said without spoiling moments from earlier in the season (if you’re not caught up). Since that’s the case, we’re just going to go ahead and dive fully into the episode.

Spoiler warning is in effect.

“Operation Beifong” picks up where last week’s “Beyond the Wilds” left off. Opal, Lin Beifong, and Bolin head to Zaofu to rescue all the other Beifongs held captive by Kuvira, who is testing the spirit vine super-weapon Varrick started. Meanwhile, in order to prepare for Kuvira’s attack, Korra seeks help from the spirits themselves.

The rescue operation itself actually goes pretty well and has a couple extra moments to push the season’s story along. On the way, we’re treated to an amazing fight between Kuvira and Suyin, tons of humor (thanks to Bolin, Toph, and Lin), and some answers to questions that were never really important for the series, but have been bugging fans for a while.

Those answers center around Toph Beifong. While Toph playing Yoda to a recovering Korra was fantastic, it wasn’t the treatment anticipated for the return of the mother of Lin and Suyin. “Operation Beifong” delivers on meeting some of those expectations, while further characterizing Toph – as fun as she is to watch – as actually a pretty terrible mother.

At the end of last episode, Lin, Opal, and Bolin left to save the Beifong family. In “Operation Beifong,” they are joined by Toph, who has kept her eye feet on the Kuvira situation. Opal is happy to see her grandmother and Bolin geeks out over seeing his hero, but Lin is short and detached with her mother. They offer each other a simple, “Hey chief.”

The night before the big jailbreak, Toph and Lin finally have it out, thanks to a little prodding by Bolin. After he asks who Lin’s father is (something fans have been questioning since Lin’s introduction in the first season), Toph casually responds that it was just some guy named Kanto she never stayed with. It’s the perfect awkward family dinner, ending with Lin saying she wants nothing to do with Toph after the mission. 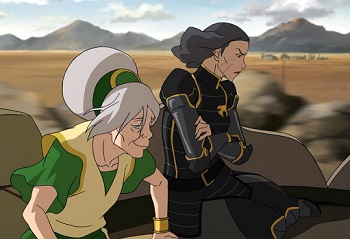 Lin’s frustration is understandable. Toph was never very outwardly compassionate, and even at the dinner she says, “I forgave you for all of your garbage long ago.” Toph is a great bender and a fantastic character, but her attitude in this episode cements her position as one of the worst parents in both series (okay, maybe Zuko’s father wins that contest). Sure, the family all forgives and moves on by the end, but it’s more out of necessity for the narrative than because anything was resolved.

Another big question fans had was whether or not Toph would jump in and wreck Kuvira’s forces. While it would have been a blast to watch, it wouldn’t really make much sense given Toph’s age. When asked if she would return to Republic City to help deal with Kuvira, Toph replies that she can’t, that her back pain is too severe. She even refers to Katara – one other living member of the original Team Avatar – as sitting out the previous battles due to her age.

“At some point, you gotta leave it to the kids!” There you have it: no major battle featuring Toph. 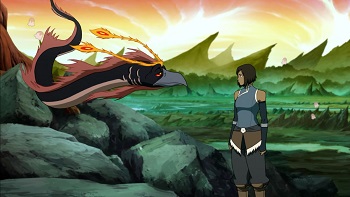 After Varrick shoots down President Raiko’s request for spirit weapons similar to Kuvira’s (who has designed some flying mecha tanks with Asami that I can’t wait to see), Korra heads out to ask the spirits for help. She is rejected by the spirits almost immediately (great art during this scene, by the way), so the whole side story seems like a bit of a wash.

This story does, however, work as an excellent example of Korra’s changed personality. She’s not about to flip out on the spirits and start demanding their help, but she does ask for their assistance very passionately. Still, the spirits refuse to become involved, stating they do not want any part of a human war. Both sides make great arguments. Korra’s right, the spirits and humans are connected now and should work together, but if that happens, is Korra just using the spirits as weapons, too? Of course, they’ll probably show up at the end to save the day, but for now it looks like the humans are on their own. 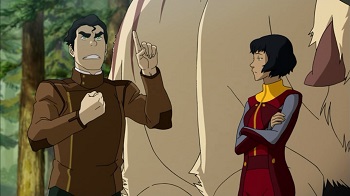 A couple other things:

Opal recruited Bolin by promising that he could win her back if he helped. It was a little weird, and at first it seemed like she might just be using him, but by the end of the episode it is clear that it was a genuine offer. They’re back together, and apparently that’s all it took. Maybe the point is that Opal wanted to be with Bolin anyway, but she didn’t want to just forgive him without making him work for it. Still, “There is one thing you can do to win me back,” just sounds disingenuous.

Oh, and the fight between Kuvira and Suyin was spectacular! The two metalbenders – mentor and mentee – go at it with very similar yet personal styles. It’s incredibly fast and inventive, which makes it something you could watch repeatedly and still notice things (thank god for gifsets). It’s one of the better fights on the show, and it’s interesting that Kuvira almost lost to another metalbender when Korra could barely stand up to her (although admittedly, Korra wasn’t at her peak).

Lastly, we finally know for certain that Zhu Li was working against Kuvira the entire time. It was pretty obvious she was going that direction, but it would have been believable if she went either way. It appears she was deceptive enough to mess with Baatar’s work on the weapon before Kuvira realized her intentions. Luckily, Bolin was there to lead the impromptu mission to rescue her.

Bottom line: Another fantastic, nearly flawless episode of Legend of Korra. No huge, epic moments, but if the rest of the series is executed this well, we’re in for a great ride.

Recommendation: If you haven’t watched it yet, you need to address that as soon as possible. Especially Beifong fans.