Earth has been laid waste, reduced to a desolate wasteland that will not be habitable by humans for centuries. The few survivors are confined to underground bunkers, eking out a meager existence generation after generation, awaiting the day when the surface can support human life. And they’ve just picked you as their new leader. 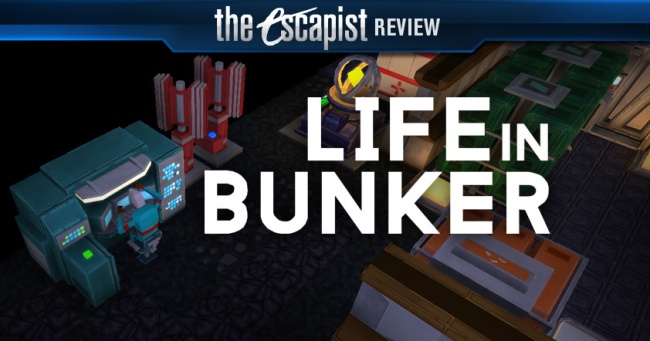 Life in Bunker is a building/strategy game from Flox Studios. It’s up to you to design and manage your bunker to meet your population’s needs, including food, air, waste disposal, hygiene, exercise, and leisure, among other things. The list is surprisingly long – I’m fairly certain this is the first game I’ve played that has separate “time until they need a shower” and “time until they need a toilet” stats for every character. There are facilities you can build for each of these needs, along with power generators and water pumps to keep them going.

There are six jobs residents can do, though each individual resident is usually only capable of two or three of them. You assign each resident a job, which they set about doing without further direction from you. If you have a research station and a scientist manning it, you generate research points, which are used to unlock new facilities and improve existing capabilities.

It’s also your job to make new residents, which fortunately for the game’s ESRB rating is done by growing embryos in tanks. You can leave their abilities random, or spend research points genetically engineering them for particular jobs. Once children are born they consume resources, but do nothing useful until they reach adulthood. You’ve got to plan ahead, thinking about what your labor needs will be well down down the line. Characters eventually get old enough to retire, stop working, and finally die, so you need a steady stream of kids to keep your society going..

I neglected this in my first game, creating only a handful of new residents so I could put off needing to expand the oxygen supply. Unfortunately, since your starting residents begin the game at the same age, they all retire at around the same age too – eventually causing a demographic catastrophe when-two thirds of the population stops working! (There is a way to mitigate this issue, provided you’re okay with trapping the elderly by strategically shutting down doors and deliberately starving them to death. Sometimes leadership means the courage to make unpopular decisions.)

Life in Bunker is a mixed bag. The process of expanding your bunker is enjoyable, and I got quite a lot of satisfaction out of making it thrive. The large array of resident needs to satisfy adds an enjoyable level of complexity and detail without seeming overwhelming. The multigenerational element and the need to plan your workforce quite a few years in advance is interesting and adds a lot. It’s fun, at least for a while, and even when playthroughs ran aground due to a poor design decision (more on that shortly) I was eager to start again. Unfortunately, there are serious weaknesses that stop me from giving a wholehearted recommendation. 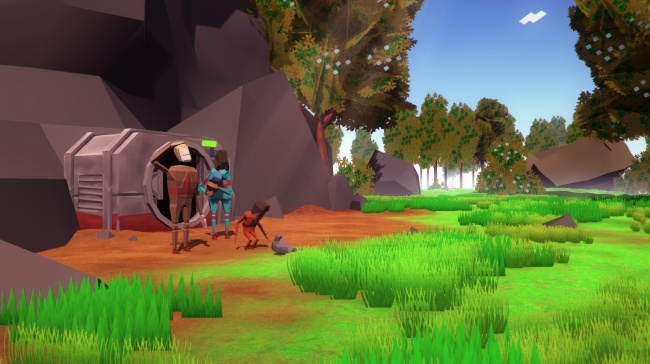 The game is mechanically shallower than it first appears. There are no penalties or bonuses for building particular facilities near each other, even when logically there ought to be. A bed works just as well for refreshing residents whether it’s in a dedicated sleeping area, in the middle of a busy corridor, or surrounded by noisy industrial machinery. There’s no reason to have distinct areas like living quarters, or even bother dividing your bunker into separate rooms, other than aesthetics. The game got less interesting once this sank in.

Aside from being eligible for different jobs, residents are basically interchangeable. They have no personality traits or individual quirks, which might’ve gone a long way towards making gameplay more interesting or at least encouraging more emotional investment. My response to characters dying was simply irritation at the loss of a resource if they were of working age, or “good riddance” if they were retired. Giving me more motivation to care about these people would have been.

There’s also a serious issue with how you gain resources. Building materials, the game’s equivalent of money, are gained by mining ore from ore deposits and processing it in a refinery. Ore deposits eventually run out, forcing you to expand to exploit new ones. All well and good, but if you don’t have the building materials on hand to build a new mining facility when your existing deposit runs dry… that’s it, you’ve built all you’re ever going to build. There are no other sources; contrary to what you might expect, disassembling existing facilities gives you nothing. You’re screwed. A new mine isn’t cheap, either.

God help you if getting to a deposit requires expanding to a lower floor, since the lift to connect floors isn’t cheap. On top of that, you’ll have to build an expensive new power plant because for some reason electricity, water, and air can’t leave the floor they’re generated on

It’s incredibly easy to paint yourself into a corner. I had more than one seemingly thriving bunker suddenly crash into a brick wall because of this. In one case, my expansion into the second floor proved impossible because, after building the lift and mine, I was one building material short of the 350 needed for the power plant. I like punishing failure to plan for the long term, but Life in Bunker takes it to a frustrating extreme that doesn’t make any sense in terms of either gameplay or realism.

Life in Bunker was enjoyable enough to keep me engaged despite its flaws, which in a way only makes those flaws more frustrating. There’s the framework of what could have been a great game here, instead of merely an adequate one. I don’t regret the time I spent playing it, but its weaknesses drag it down too much to give it the enthusiastic recommendation I’d like to.

Bottom Line: Life in Bunker is a promising strategy/building game hamstrung by mechanics which are shallower than they first appear.

Recommendation: Provides some casual fun, but unless you really love the post-apocalyptic bunker idea it doesn’t do enough to set itself above other strategy games.