This year, I embarked on my final journey with several of my favorite protagonists. I met, and fell in love with, some new characters. I had my understanding of gaming challenged, and emerged with the appreciation of a mind-blowing game being crafted around a single mechanic. I can tell this was a great year entirely by how difficult it has been for me to narrow my favorites down. There are several games that have me wishing this was a Top Ten list, as omitting them feels, at the risk of sounding breathlessly hyperbolic, sacrilegious. Ultimately, my list was determined by those games that I found myself returning to, despite having other things that demanded my attention at the time. The games that I very seriously considered sacrificing showers, sleep, and sustenance for. The ones that I thought about long after I had finished playing them. Without further ado, here are my five favorite games of 2016. 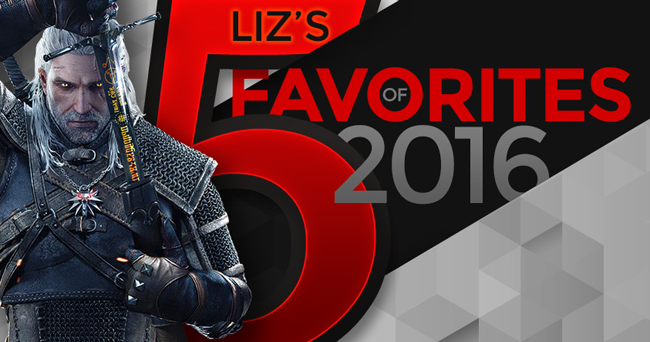 Hate to see you go, love to watch you leave. I was cautiously optimistic about Uncharted 4 – and admittedly, the caution outweighed the optimism, particularly when Naughty Dog began to stress that A Thief’s End would mark the end of Nathan Drake’s story. I have never handled finales well, not necessarily because I have difficulty letting go, but rather because I often find myself disappointed in the ending. Uncharted 4 was, from the very first scene, the exception to that rule.

Overall, Uncharted 4 was a classy, dignified farewell to a protagonist that I was worried I was starting to become tired of. It not only had a gripping story that I struggled to walk away from, it also sported the best controls, and combat, of the entire series. I’ve said this several times, and will continue to say it: If Uncharted 4 was the only PlayStation 4 exclusive ever, I would purchase the system all over again in a heartbeat.

Developed by From Software and published by Bandai Namco. Released on April 12, 2016. Available on PC, PS4, Xbox One. Review code provided by publisher.

My formative gaming years occurred during a rather sadistic time in video game history. I grew up on games you couldn’t save – or even worse, games that you needed to keep a piece of paper handy for in order to appropriately document an elaborate item-placement password – I’m looking at you, Super Castlevania IV. I remember the rush of beating a game I had dedicated many a sleepless night to, only to have my hopes crushed moments later because the devil was screwing with my head and I had to redo the entire thing a second time. Without dying. The Souls franchise is exactly like that, only this time with the dying. Lots and lots of dying.

There are certainly a number of things you can criticize about Dark Souls III, particularly if you consider yourself to be a Souls purist, but there’s no denying that the game offers a deeply satisfying gaming experience that may or may not haunt you for many years to come. And isn’t that really what we all want, deep down?

Developed and published by Superhot Team. Released on February 25, 2016. Available on PC, Xbox One. Review code provided by publisher.

Superhot is the product of a 7-Day FPS game jam that was so successful, the team turned to Kickstarter in order to raise the funds needed to expand it into a full gaming experience. The graphics, the environment, the style – everything in this game is shocking in its simplicity, save for the actual gameplay, which is quite demanding. The setting appears sterilized with a uniform color and minimal details, and enemies present as red, featureless human-shapes that shatter like glass when killed. But that’s not what makes the game special – it is the fact that the developers were able to create an entire, intriguing game based off a single good idea. In this FPS, time crawls, moving when your character does. It demands a balance of balls-to-the-wall mayhem and patient, methodical strategizing. The ability to slow time by stopping allows the opportunity to actually assess the environment and plan, which is particularly useful in scenarios with multiple enemies. But once time movies, holy cow does it move. This one was a no-brainer for my 5 Favorites, if for no other reason than that it left such a lasting impression after I was finished with it.

Developed and published by Blizzard Entertainment. Released on May 24, 2016. Available on PC, PS4, Xbox One. Review code provided by publisher.

I still struggle to put into words why I love Overwatch so much. It’s simple to learn, difficult to master, and has a brilliantly diverse roster of colorful, interesting, fun heroes to play, without forcing you into a committed relationship with any of them. I can swap from the hardened war veteran to the sexy sniper to the talking gorilla with ease, assuming I’ve taken the time to become familiar with them. Every character is memorable and unique, not just visually but through and through, each with unique abilities that make them so much more than a handful of skin swaps. But characters alone do not make a Top 5 game. Overwatch is impressively balanced, with constant updates and tweaks, but more than that – it’s completely addictive. No matter what’s happening in my life, I end up returning to Overwatch. Insomnia at 2am? Play Overwatch. My kids spent the whole day being assholes? Play Overwatch. The Raymour and Flanigan guys are setting up the new bed and I have to stay close? Play Overwatch on the gaming laptop at the kitchen table in my pajamas. I can’t seem to walk away from the game for longer than a few days at a time – and I’m totally okay with that.

Developed and published by CD Projekt Red. Released on May 31, 2016. Available on PC, PS4, Xbox One. Review code provided by publisher.

In 2015, one game stood so far above the rest that I was tempted to use it for all five of my five favorite slots – and that game was The Witcher 3: Wild Hunt. The Witcher 3 did not merely set a new bar for gaming for me, it became the bar against which all other games were doomed to be measured. And while I typically have a love-hate relationship with expansions, when two beefy additions were announced I committed myself without a moment’s hesitation, and found myself fully enamored with the first, Hearts of Stone.

Combined, both expansions were equivalent to the size and scope of The Witcher 2, and I feel safe assuming that many other studios would have bundled the pair and marketed it as a fourth installment. Alas, CD Projekt Red is not just any studio. Blood and Wine served as the final leg of our journey with Geralt of Rivia, and served as a fitting farewell to the ashen-haired badass that had successfully stolen and held my attention for more than a year.

Blood and Wine shows us a new side of Geralt’s world – one without the clouds of doom without sacrificing any of the narrative mastery that has become synonymous with the franchise and CD Projekt Red alike. It’s stylish and charming, the setting a bright, silly departure from the bleak impending-doom vibe that I’d come to expect from the series. Blood and Wine was every bit as addictive as the main game and, despite all the changes it brought, felt right as part of The Witcher 3. Some expansions feel like rushed additions and money grabs, but Blood and Wine continued the labor-of-love feeling that’s become expected from CD Projekt Red games – and that is why it is my favorite of 2016.