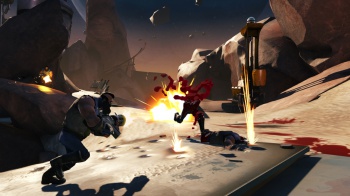 Australian and South American Loadout players will now be forced to play on high-ping American servers.

Loadout is a fun little Team Fortress 2-inspired third-person shooter, whose free-to-play microtransaction system has been pretty much universally praised by gamers and critics alike. Unfortunately for Australian and South American fans of the game, their experience is about to get a whole lot worse. An Edge of Reality customer service agent has confirmed that the Australian and South American servers for the game have been disconnected, meaning players from those regions must now play on higher-ping overseas servers.

“Unfortunately, after reviewing the history of our various game servers traffic seemed that our Australia and South America servers were not seeing enough traffic to support players the ideal match, resulting in waiting times too long for matches degraded efficiency the matchmaking system,” said the agent, adding that “we monitor traffic on a regular basis, and so we see a sufficient number of players accessing our game servers from these regions, we reevaluate the possibility of activating these servers again! “

Loadout, while initially quite popular, has plummeted in average player count, dropping from 30k average players in February to just 3k at last count. It’s no surprise that the servers are being shut down, but it’s still a bummer to players from the affected regions – particularly those who had invested real money into the free-to-play title.

For a shooter-type title like Loadout, ping is a very important aspect of online play. Australian ping to American servers is usually in the 200-300ms range, which any shooter fan will tell you is completely unacceptable.

We’ve reached out to Edge of Reality for comment.