Logitech has always been a prolific manufacturer of peripherals, but its output of late has been substantial even with the company’s history. After releasing the G810 Orion Spectrum mechanical keyboard in February, there’s more in store for March, with a new variant: the G610 Orion.

At first glance, you might wonder what the difference between the G610 and G810 is. They both have the same straightforward design, with little in the way of extra buttons or apparent bells and whistles. Neither keyboard is flashy, and if you turned the backlighting off, they wouldn’t look out of place in an office. But once you plug the G610 in and start typing, the differences become clear. 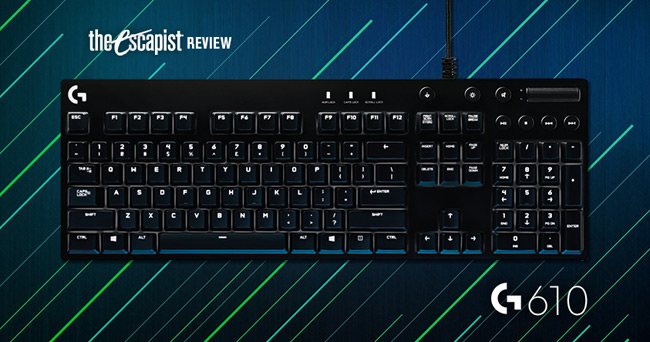 The biggest change is in the switches the G610 employs. Instead of Logitech’s proprietary Romer-G switches, the G610 includes your choice of either Cherry Red or Brown switches. If you’re not familiar with Cherry’s switches, they’re used in a number of keyboards from various manufacturers. The Red switches are linear, which means that they aren’t very clicky, and there’s no tactile feedback (or “bump”) when a key activates. The Brown switches add a tactile bump when the key activates, giving you some feedback. Both switches have a low actuation force (about 45 grams), and both are common in gaming keyboards. As usual, the G610 incorporates rollover technology, allowing to press up to 26 keys simultaneously and get exactly the result you expect.

It seemed odd that Logitech would go back to Cherry switches when all the company’s recent keyboards have featured the Romer-G, but Chris Pate, the Gaming Portfolio Manager for Logitech G, told me that they made that decision to give gamers more options. Pate acknowledged that the Romer-G switches had done well, but that the company knows that there are gamers who just like Cherry’s switches, and that Logitech wanted to have options for those people.

The second big change from the G810 is in the lighting. Rather than the fully RGB lighting that you’d find in its predecessor, the G610 offers only white backlighting. That said, you can still choose how your keys are lighted, including per-key lighting, a number of effects, and even the ability to sync your backlighting with other Logitech devices. That means that you can have the lighting on your mouse, your keyboard, and even your headset match, both in color and effects.

Like the G810, the G610 Orion has moved the “G-key” functionality that you’d find on previous Logitech keyboards onto the F-keys. Through their software, you can program macros that can be fired by any of the F-keys. As with other Logitech peripherals, these macros can be saved to game profiles that will activate automatically when a game is loaded.

Thanks to sharing the same body as the G810, the G610 has the same nice additions. That includes the ability to use the three-position feet to tilt the keyboard at zero, four, or eight degrees and the same rubber non-slip feet. It also means that you get a great-looking keyboard as well, and thanks to a steel plate inside, it’s nicely weighted.

Unfortunately, sharing the same body also means the G610 incorporates the shortcomings of its predecessor. There’s no USB passthrough or any other type of port on the keyboard. The media keys feel clicky and have little travel. Luckily for gamers, these aren’t a make or break feature for most us.

Despite a few shortcomings, the G610 is a particularly nice mechanical gaming keyboard. It would be equally at home in an office or a gaming tournament, and best of all, it’s the most affordable entry in Logitech’s recent keyboard slate at $119. It might be missing a few features, but all of the core functionality is still there.

Bottom Line: While it might not have all the bells and whistles of its brethren, the G610 Orion is a solid gaming keyboard that would be a great addition to any gamer’s desktop.

Recommendation: If you’re a fan of Cherry switches, or you’re just looking for a great gaming keyboard that won’t break the bank, the G610 Orion won’t let you down.